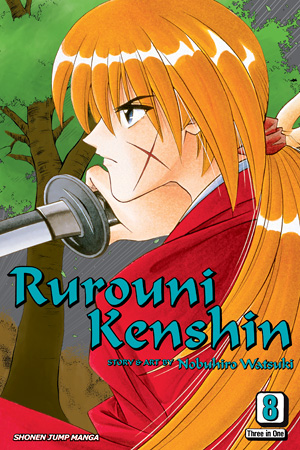 Making good on his promise to attack the Kamiya Dojo, Enishi and his comrades pounce on Kenshin and company and quickly fight them to a standstill. Seeking to break the impasse, the masked puppet master Gein prepares to unleash his greatest creation, Iwanbō Version Three. Now the battle has three fronts: Sanosuke vs. Inui Banjin and his indestructible gauntlets, Yahiko vs. the deviously deadly Otowa Hyōko, and Kenshin vs. Gein's latest toy.

Not wanting to be left out of the fun, Saitō Hajime happens by in time to clash with the freakish Yatsume MumyōI, but has this all been a calculated step in Enishi's master plan? For the first time since his appearance in Tokyo, Enishi unveils his awesome fighting skills, a deadly combination of both Japanese and Chinese techniques. Believing that Kenshin's death alone will not satisfy his departed sister's soul, Enishi prepares to cast Kenshin into a living hell of remorse and regret. Will Kaoru become a sacrifice on the altar of Enishi's bloody revenge?