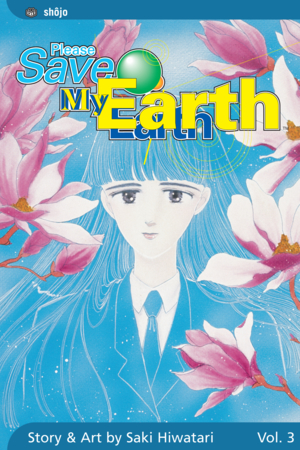 Please Save My Earth, Vol. 3

Alice has had her own "moon dream," in which she was the beautiful Mokuren. Sure in the knowledge that, if they have found Mokuren, perhaps they can find the other people in their "moon dreams," Jinpachi sets out to do just that. But it's Issei's odd idea of running a letter in a cult magazine that brings them success--they have foound Hiiragi and Shusuran! Their real names are Daisuke and Sakura, and it's from them the others learn the tragic truth. The dreams are not of their future lives, but of their past as alien observers on the moon. After their home star system was destroyed, they contracted an incurable disease and quickly died, one by one. That's why they're all about the same age.

What they don't know is that the reborn Shion and Shukaido are also in the Tokyo area. But what does all this have to do with Rin and his quest for the Tokyo Tower?