High School is rough, but imagine going to school with your whole family!

Kotaro Ietani looks forward to starting a fun, normal high school life…until his family appears in matching uniforms at the same high school. His dad Ichiro, his mom Shizuka, his little sister Haruka, and even Gomez the cat all join Kotaro as students in his first-year class. The whole family makes friends, joins sports, and lives out their dreams of being high schoolers—together!

Ryo Nakama was born in Okinawa on August 29, 1990. His short story “Hirukonetoro” was selected as a winner at the Kuroshio Manga Awards in 2010. After the release of several one-shots, he launched Isobe Isobē Monogatari as a series in Weekly Shonen Jump in 2013, and the manga ran until 2017. High School Family: Kokosei Kazoku began serialization in 2020.
Add favorite  Favorited

On a trip to the countryside, the Ietani family tries to explain their academic situation to confused grandparents. Kotaro then blurts out his feelings for Yumiki to the tennis team, and Ichiro and Suzaki’s volleyball rivalry takes a dangerous turn at the beach. From gaming to festivals, the high school family makes the most of summer! 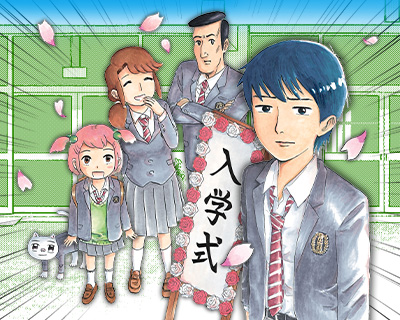