It’s a serious question, but Vigilantes addresses it in a way that is both lighthearted and comedic, and at the same time occasionally veers into pathos. As a spin-off, it expands the world of My Hero Academia, showing what life is like for more ordinary people, as opposed to the lives of selected kids studying in a school for heroes-to-be (at a school with a seemingly unlimited budget as well). 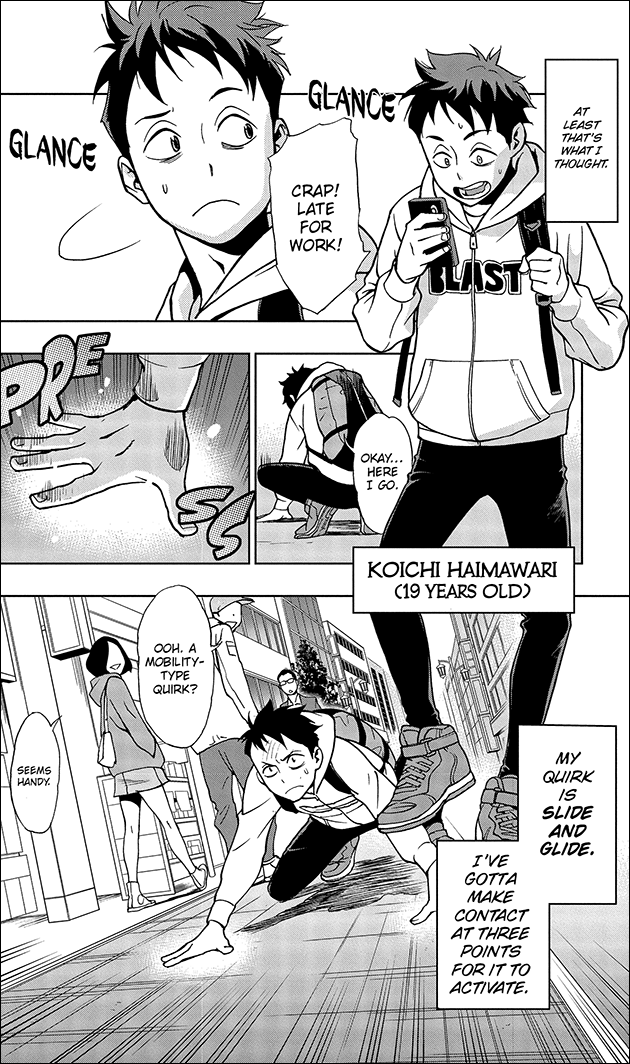 The main character in Vigilantes is Koichi Haimawari, a 19-year old college student. Koichi once wanted to be a hero but couldn’t pass the exams. Koichi now just wants to enjoy his new life as a university student while working part-time in a convenience store. Koichi calls his Quirk “Slide and Glide” which allows him to move around on any surface (only about as fast as a bicycle though) as long as he’s touching it with three points of contact. Koichi has a strong good Samaritan streak in him, which he exercises by donning an All Might hoodie and going out after work and doing good deeds for people, like picking up trash, giving directions and other nice things—which is why people start calling him “Nice Guy” (which he kinda hates – he’d prefer they call him “The Crawler”).

One day Koichi runs into Pop Step, a high school girl who performs as a freelance idol. Pop Step can’t carry a tune in a sack, but her Quirk lets her bounce around all over the place. When Pop Step is attacked by a group of thugs, Koichi goes to her aid. But the thugs are a bit more than Koichi can handle, and as things are about to go really bad, in drops our third lead character, Knuckleduster. 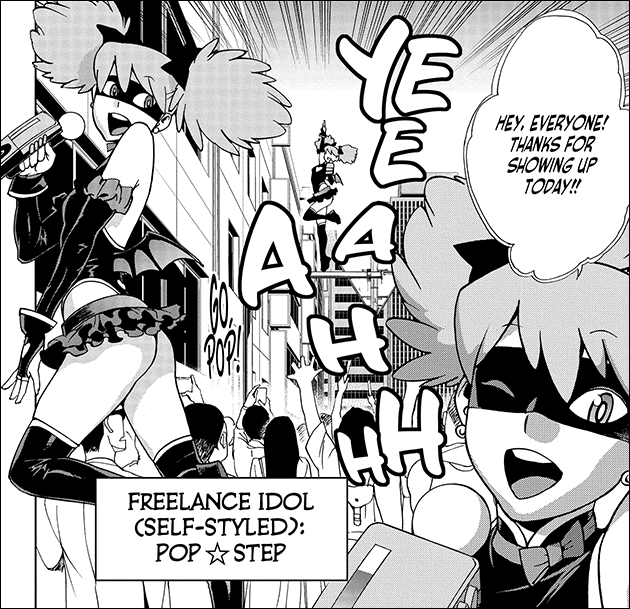 Knuckleduster is a grown man, a big guy with big fists—and he like to use them! He teams up with Koichi and Pop Step to form an unlikely crime fighting group in the run-down part of town where Koichi lives. 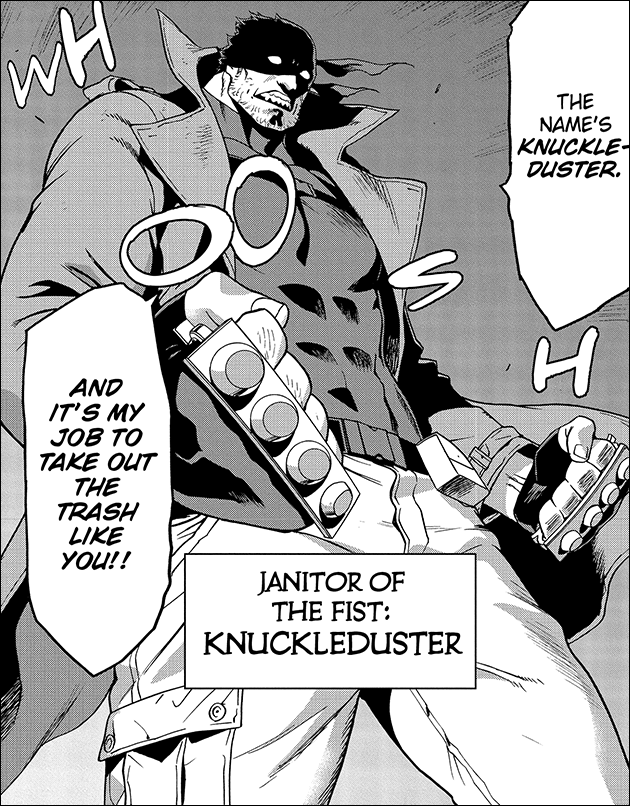 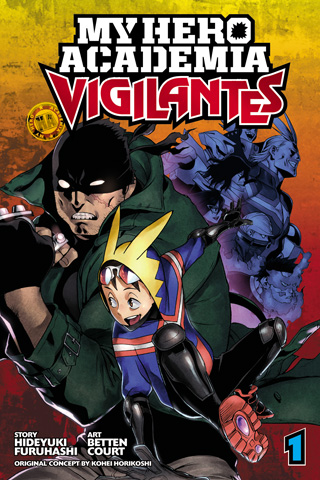 The characters in Vigilantes each have their own motivations for what they do, and writer Furuhashi does a great job of building them up as the story progresses. Each of the three main characters has an interesting hook and it’s fun to see them in action. Koichi wants to be a hero, and looks to Knuckleduster to show him how to do it. The thing is, Knuckleduster isn’t really interested in being a hero and his own motives are part of the mystery driving the first arc of the story. Pop Step also has more to her interest in Koichi than simply needing someone to manage her appointments.

One of the things I like personally about this series is that it doesn’t take itself too seriously. The characters have a great dynamic with each other that is often good for a laugh. At the same time, the action scenes are cool and dynamic, and given that the main characters are not professional heroes, really seem dangerous. There is also a bit of a dark undertone to the story that sometimes surfaces, a good contrast to the overall lighthearted feel.

Betten Court does a great job with the art, paying both homage to the design and look of the main My Hero Academia series while also displaying his own whimsical style. Combined with Furuhashi’s writing, the result is a fun, funny, action packed series that stands on its own. And since it’s part of the My Hero Academia world, characters from the main series even make occasional cameo appearances! 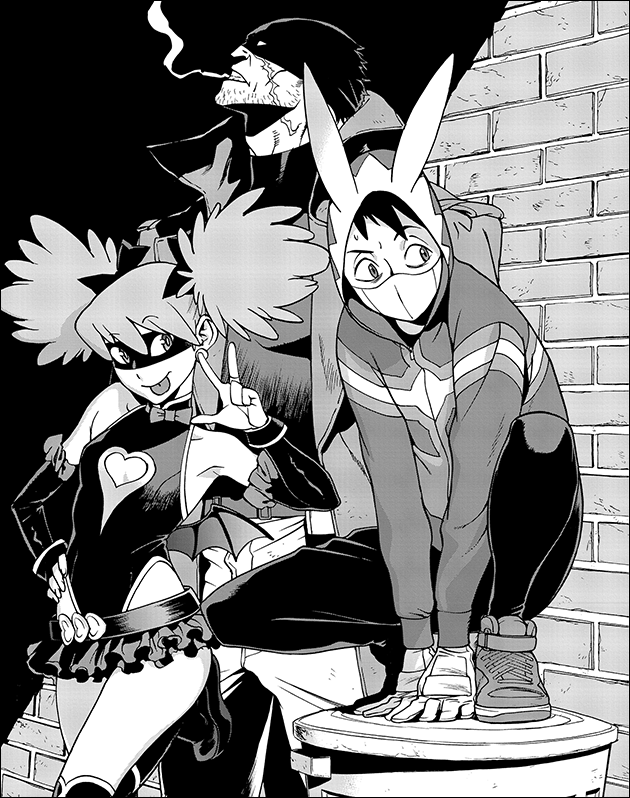 If you are a fan of My Hero Academia, Vigilantes is definitely worth a look. It’s different enough to be its own thing, yet grounded in the familiar world you already know. And if you are just looking for a cool, funny and engaging story about regular joes just trying to get by in a superpowered world, you won’t want to miss My Hero Academia: Vigilantes!