It's always a good Monday when a brand new series joins Weekly Shonen Jump Alpha!  In this week's Issue 11-26-12, Nisekoi:False Love is debuting as a part of weekly manga lineup. Not only that, the digital edition of Nisekoi vol.1 also is available via VIZManga.com today! 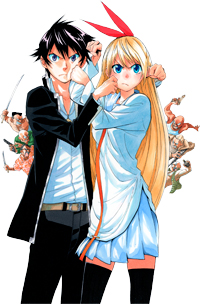 As a child, Raku Ichijo made a secret promise with his childhood sweetheart, keeping a pendant as a memento while his love took the key. He dreams of one day meeting his past love, but years later, reality smashes his hopes when Chitoge Kirisaki accidentally knees him in the face...

Though Raku’s a normal high schooler, his family heads the notorious yakuza gang the Shuei-Gumi faction! And he’s dragged into family affairs when he’s forced into a relationship with Chitoge, the daughter of a rival gang’s boss!

Despite their constant spats, the two somehow fool everyone with their false relationship. Raku then discovers that Chitoge has a mysterious key from her past, which she can’t remember... Plus, two other girls appear with keys as well—Kosaki Onodera and Marika Tachibana!

Caught in the midst of this love maelstrom, even more complications arise for Raku when his class decides on Romeo and Juliet as the class’s play for the school festival. Can the two false lovebirds pull off the impossible and make the play a success?!

CHITOGE KIRISAKI
Chitoge can't stand Raku at first sight, but as they go through one hilarious situation after another, she now realizes she's fallen in love with him!

KOSAKI ONODERA
Raku has a crush on Onodera, and she has feelings for him. However, the two can't seem to get on the same page with their feelings for each other!

RAKU ICHIJO
The gangster life doesn't suit Raku, who prefers taking care of animals and helping others over beating the snot out of 'em.

MARIKA TACHIBANA
Thanks to another rash promise by his father, Raku must also appease the scary-as-hell police chief's daughter, Marika Tachibana.

SEISHIRO TSUGUMI
At first mistaken as a boy, this deceptively buxom assassin is Chitoge's bodyguard and might also have feeling for Raku!

Sit back, relax and get ready to smile and laugh with SJ Alpha's newest series—Nisekoi: False Love!

Interested in finding out how the story began? Check out the digital edition of Nisekoi: False Love volume 1 or the SJ Alpha Starter Pack available today at VIZmanga.com!