Once again, TEAM JUMP made their way to the Land of the Rising Sun—Japan! Editor Alexis Kirsch got the chance to sit down with Tatsuhiko Katayama, the editor of Jujutsu Kaisen, for an incredible interview!

Team JUMP: Please introduce yourself and tell us which series you work on. 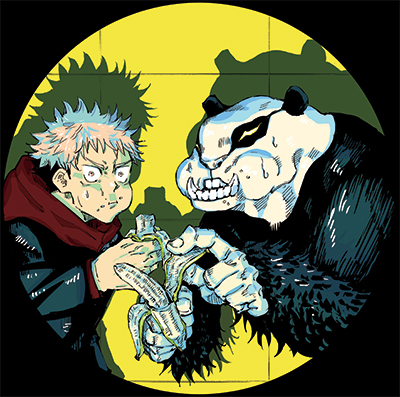 Tatsuhiko Katayama: I’m Tatsuhiko Katayama. I’m an editor for Weekly Shonen Jump. I’ve been [with WSJ] for nine years and I’m 31 years old. Unmarried. I currently work on the dark-fantasy action manga Jujutsu Kaisen and a suspense series called Summertime Render on the Jump+ website... Oh, by the way, I watched a video on the English SJ Twitter with Sasaki-san! I loved it! What was that line? "Manga can change your life!" I showed it to all the other editors.

Tatsuhiko Katayama: That’s it! Change the world! That app is great. You can read the chapters simultaneously with Japan for free, right? Okay, sorry, sorry.

Team JUMP: No, tell us more!

Team JUMP: We last interviewed you in late 2016. How have you been since then?

Tatsuhiko Katayama: Two years ago, I became a hancho ("group leader"). I became a captain and realized how easy I had it before. I have to "breed"—ah, breed isn’t the right English word used for humans is it? I mean rear! Rear the newer editors, give advice to various people and answer questions so the job of a captain is really tough.

Team JUMP: Editor-in-Chief Nakano-san was your captain at one point, right? Did you learn anything from him?

Tatsuhiko Katayama Just that I’m no match for him. There’s this slogan from a shrine in my brother’s room that says “ko wo motte shiru oya no on.” This basically means that you can’t understand what your parents gave you until you have kids of your own. So suddenly I was like, “Wow! Nakano-san had to go through so much!” I realized how much he helped me and how he was on a whole different level.

Team JUMP: Does being a Shonen Jump editor become easier with experience?

Tatsuhiko Katayama: Not at all! No, no, no! Actually, you have less stamina and drive compared to when you were younger, so it’s harder.

Team JUMP: We interviewed fellow-editor Sugita-san earlier, and he seemed young and still full of energy.

Tatsuhiko Katayama: He’s still in his 20s. He’s 29, so he has more energy—though his stomach sticks out more than mine! [laughs] It’s hard not to stress eat at this job.

Team JUMP: You recently moved on from being the editor of Black Clover. Was that a difficult experience?

Tatsuhiko Katayama: It was! I’m not the one creating it, but passing the baton to someone else on a series that you helped on for so long is difficult. Sometimes you have a different opinion on how things are going after you leave, but you’re not the editor anymore. Plus, we’re not the creators anyway, so we can only give advice. It’s tough. However, seeing the series do something you didn’t expect is really fun. Seeing something happen in the series that may not have happened if I was the editor is really interesting as a reader.

Team JUMP: When an editor leaves a series, is it hard to resist constantly give the new editor advice?

Tatsuhiko Katayama: So, at first, I didn’t think that there was any reason to hold back on the advice. The new editor is a rookie editor named Toide, so I was giving him advice. But then I got more and more busy and didn’t have any time for him. So now it’s easy to hold back.

Team JUMP: I was recently working on your goodbye message at the end of Black Clover volume 15. It was a lot of work for Annaliese, the letterer. [laughs]

Tatsuhiko Katayama: Oh! Thank you so much! Sorry for making it so wordy! Tabata Sensei suddenly asked me to include two pages. I was like “What?!!” But I decided to do an article with some of my top three characters and moments in the series. Thanks for working on it.

Tatsuhiko Katayama: Let’s see… For Black Clover, the main work is coming up with story ideas together with Tabata Sensei. Oh, though once the idea is decided, everything is super smooth. With Jujutsu Kaisen, all the ideas are already there, so it’s more about deciding the direction. With Black Clover, we have the direction; it’s just about coming up with the ideas on how to get there. I think that’s the biggest difference.

Team JUMP: What would you say to encourage a new reader to check out Jujutsu Kaisen?

Tatsuhiko Katayama: Let’s see… What I usually say is, it’s a shonen manga for adults or a more mature manga for kids. Meaning, adults will be reminded of how they felt when they were younger, and kids can read it and feel like they’re growing up. They get to see a glimpse of a cool, adult world. So basically, it’s a series that anyone can enjoy! That’s the basic sales pitch that I came up with. But to be more specific, the dialogue is really sharp. All the characters are really unique and speak as if they are real people. That’s what sets it apart from other series. Also, the plot is really dire. Like the main character almost dies immediately, and there’s some really grotesque stuff in it. But the themes of the story require that. It’s not just thrown in there without reason. How will the characters develop under these cruel conditions? It’s serious, but it touches your heart. That’s the kind of manga it is. Sorry that was so long. 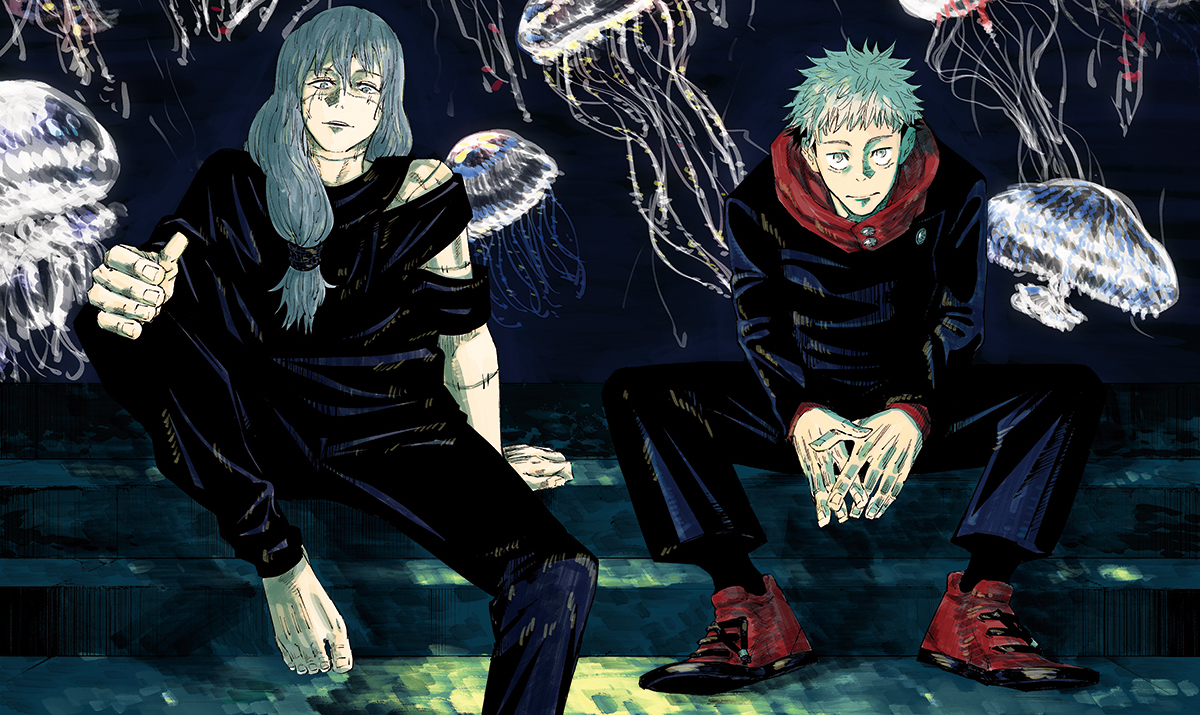 Team JUMP: Tabata Sensei is very similar to Asta. Is Akutami Sensei like any of the characters in Jujutsu Kaisen?

Tatsuhiko Katayama: That’s so true about Tabata Sensei! I actually talked about this with Akutami Sensei yesterday. I think it’s Gojo Sensei. Akutami Sensei is really cheery and cool! Cheery but super-duper smart. Akutami Sensei reads a ton of novels and watches so many movies. Akutami Sensei's very smart like Gojo as well.

Team JUMP: What does a cursed finger taste like?

Tatsuhiko Katayama: I also asked Akutami Sensei about this. The answer is wax! Or soap. The reason is that dead flesh can turn into corpse wax.

Tatsuhiko Katayama: What did you expect?! It’s a dead body!

Team JUMP: Will you make finger-shaped chocolates or snacks? Finger keychains? Or candles?

Tatsuhiko Katayama: Good idea! I asked Akutami Sensei about what kind of merchandise we should make a while back. The first suggestion was cookies shaped like fingers. But that was rejected.

Tatsuhiko Katayama: Well, there is a chance we might still do it. We’re currently discussing some bookmarks shaped like fingers.

Team JUMP: Will you be cosplaying at this year’s Jump Festa and if so, as who? 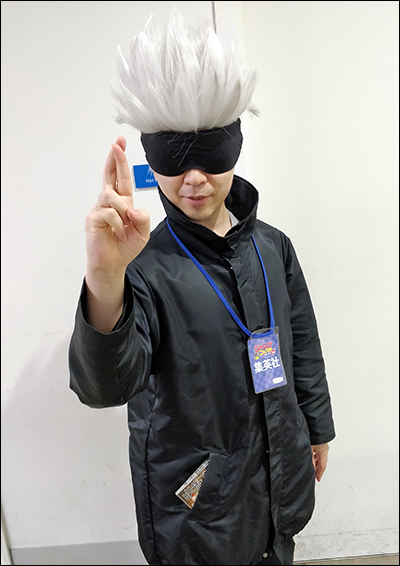 Tatsuhiko Katayama: The answer is…of course! I basically work hard at my job just for the opportunity to cosplay. Jump Festa without me cosplaying is unthinkable. I’ll be going as Gojo, the teacher from Jujutsu Kaisen.

Team JUMP: Gojo Sensei has his eyes covered, right? Will you be able to see?

Tatsuhiko Katayama: Don’t worry, I’ll be able to see. [pulls out mask] There are many small holes that I can see through. It’s not easy to put on, but it’s worth it. I’ll be wearing this and walking around the Shonen Jump booth.

Team JUMP: What other characters have you cosplayed as?

Tatsuhiko Katayama: Asta and Sai Jack (the mascot of Saikyo Jump). I am Sai Jack!

Team JUMP: Thank you for having us today.

You can read the latest chapters of Jujutsu Kaisen for free and on the same day as Japan on viz.com or the Shonen Jump app!