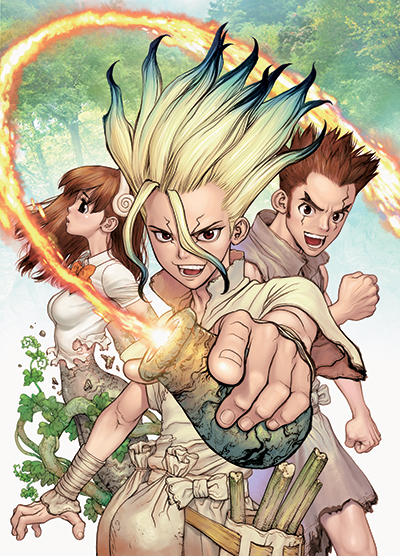 Once again, TEAM JUMP made their way to the land of the rising sun—Japan! Editors John Bae, Marlene First and Alexis Kirsch, plus letterer extraordinaire Annaliese Christman, got the chance to sit down with several creators and editors for some incredible interviews! And this time around, we have a special interview for science and manga lovers all over—Riichiro Inagaki, the writer of Dr. STONE !

TEAM JUMP: If you were in Senku’s position, what type of person would you bring back first?

Inagaki Sensei: It’s gotta be Tsukasa. I’m sure I’d end up in the same situation as Senku. If you can’t hunt, what are you going to do about food? I’m not very athletic, so I’d revive someone like Tsukasa to hunt down food for me. I’d start with someone strong and worry about farming later. I believe that Senku made the right decision.

TEAM JUMP: So someone who can kill lions with their bare hands?

Inagaki Sensei: They wouldn’t have to be that strong! [laughs]

TEAM JUMP: Do you think you, Boichi Sensei and Kurare-san could survive in a stone world?

Inagaki Sensei: I think only Kurare-san would have a chance. I think Boichi Sensei and I would die instantly. We’d create a manga and then quickly die. But none of us is very strong, so we’d probably all die. Kurare-san did tell me he couldn’t do it, same with Boichi Sensei. The biggest reason is because they wouldn’t have their glasses. Kurare-san can’t even walk without his glasses.

TEAM JUMP: Could the three of you work together?

Inagaki Sensei: I’d have to start by taking both of them by the hand and leading them around because I’m the only one that can properly see. Even so, surviving would be a nearly impossible battle. 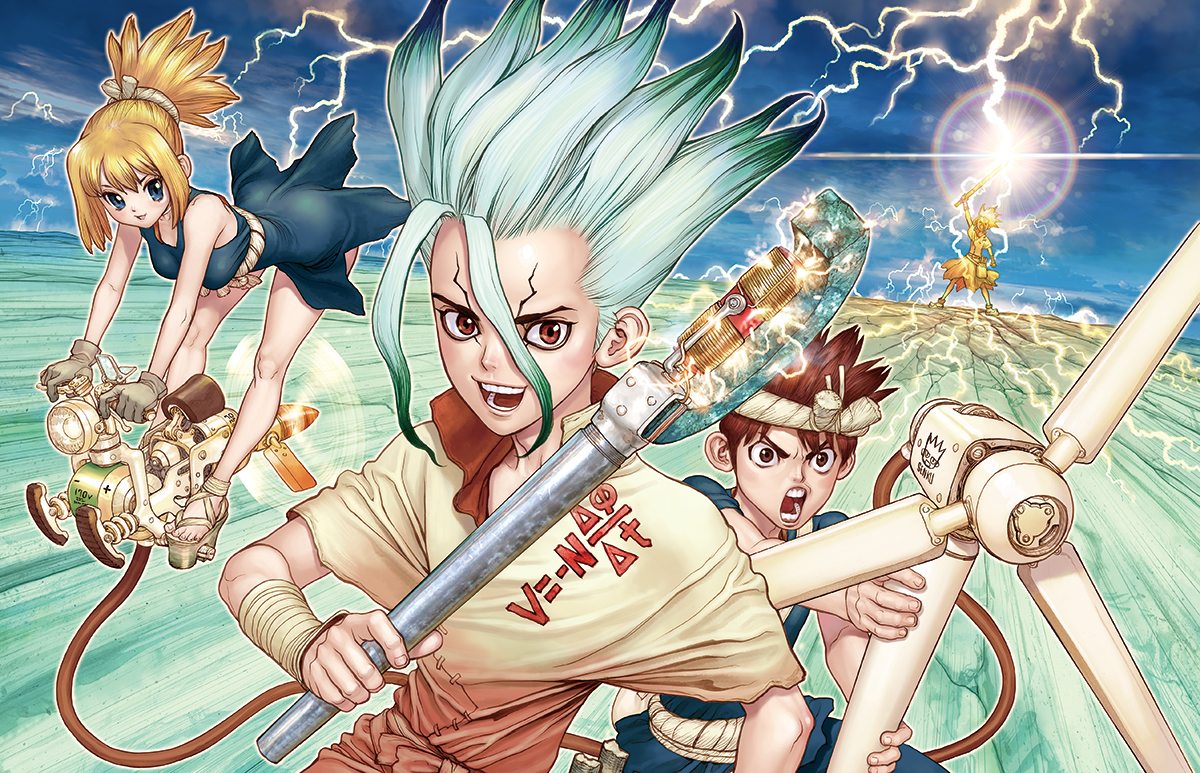 TEAM JUMP: Do you think the real end of the world will be this fun?

John Bae: It does look pretty fun to me.

Inagaki Sensei: It seems really tough! Maybe I’m only including the parts where they are having fun. I’m skipping past a lot of the struggles, but the characters are going through some difficult stuff. But one thing that’s wrong is that it isn’t the end of the world, it’s the beginning of the world. I just said something really cool! [laughs]

TEAM JUMP: Which character do you relate to most in your manga?

Inagaki Sensei: In Dr. STONE? I think it’d be Yo. He’s a total idiot who only cares about rising up the hierarchy of society. I can really understand how he feels. [laughs] I think people like him are pretty common among men. Most people would probably be like him. Another would be Ginro. He’s a pretty big piece of trash as well. I’m basically trash too so I can easily see myself as either of those characters.

TEAM JUMP: How much have you learned about science while writing Dr. STONE?

Inagaki Sensei: Whenever something new comes up. I do my best to research and understand it. But when you get really in-depth on something, you always end up confused. For example, the scene with the radio waves. I might be a little off, but there’s the scene about running electricity through different coils and producing the waves. I understand that running the electricity through it produces that. I also learned in junior high about how it becomes magnetized. I understand that. But why does putting a tube inside of a tube and running electricity through it produce some weird thing called radio waves? I don’t get it. I just can’t understand that. So I called up Kurare Sensei and asked him why it happens like this. Then Kurare-san said “Yup! I don’t understand it either! It just does.” When it gets down to it, sometimes the more you understand about science, the more you realize there’s so much you don’t understand. If the scientific world doesn’t understand it, there’s no way for Kurare-san or me to understand it either. At that point, all you can say is “it just works that way.” I end up doing that a lot.

TEAM JUMP: How did you celebrate Dr. STONE getting an anime?

Inagaki Sensei: When Dr. STONE got an anime? I haven’t celebrated at all yet. The reason is because it hasn’t actually run on TV yet. Nobody knows what could happen in the future. I might do something bad and…

Inagaki Sensei: Exactly!! That could happen. Or I might say the wrong thing during this interview and get in trouble with Jump. That could happen, right?! But when the anime actually premieres, I’m gonna take out the bottle of Chateau Palmer from my wine cellar and celebrate.

TEAM JUMP: What are you most looking forward to with the anime version of Dr. STONE?

Inagaki Sensei: What I’m looking forward to is… So the first episode will have the world-changing event happen and I’m excited to see how many millions of yen they spend on animating it. I’m expecting a lot. Maybe they’ll even spend a billion? [laughs] I’m excited about the CG.

Japanese Editor: You’ll be paying for most out that out of your own pocket, right? [laughs]

TEAM JUMP: Do you have every major story beat planned out, or are you coming up with the story along the way?

Inagaki Sensei: The big plot points are decided ahead of time. But the small details are determined by the characters acting out on their own. You can’t come up with that stuff ahead of time, you gotta do it week by week.

TEAM JUMP: With Tsukasa and Hyoga now defeated, is the plot headed to a man vs. nature conflict?

Inagaki Sensei: No. It will not be about man vs. nature or man vs. science. The reason is, because to me, both nature and science are the friends of man. I just said something really cool again! [laughs]

Japanese Editor: It would have been cool if you hadn’t added that last part!

TEAM JUMP: Then will we see new villains?

Inagaki Sensei: I’m not sure what counts as a villain, but there will definitely be new challenges and adversity. 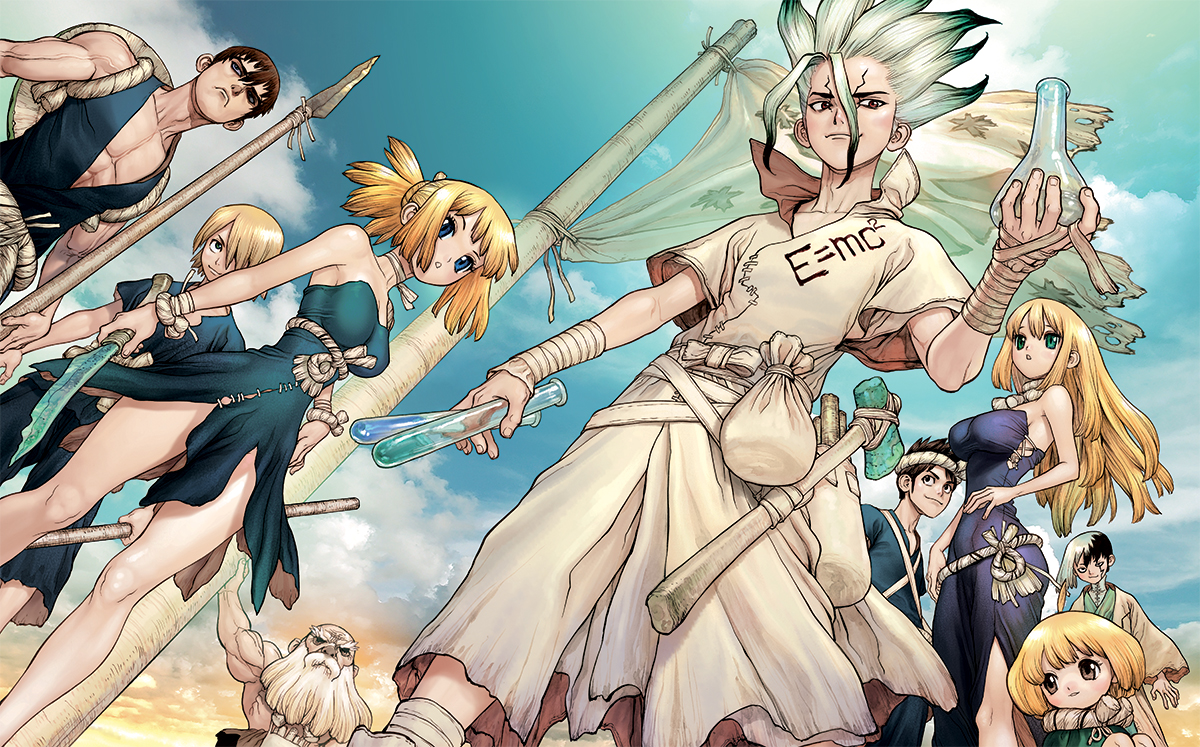 TEAM JUMP: Dr. STONE characters often have very unique names. How much time and effort do you put into coming up with their names?

Inagaki Sensei: I actually put a lot of work into the names. I have a whole file that’s a large naming list. So I grab possible name choices from there and make some tweaks. I end up spending too much time on that and it can make me fall behind my schedule. So I will often move ahead with temporary names that I end up changing later.

TEAM JUMP: How did just six astronauts create a healthy community that could last for 3,700 years without serious problems from inbreeding/lack of genetic diversity?

Inagaki Sensei: The basic answer to this is, nobody knows whether this is possible or not. The reason is because nobody has ever tried it. But there are situations where islands were populated with small numbers of people. But nobody knows if it started with four people, or ten people. So if nobody really knows for sure, then the god of the world can decide it. And I’m the god of the world in Dr. STONE.

Inagaki Sensei: I did! [laughs] I’m just a cool guy.

Inagaki Sensei: To be blunt, yes. I’m being greedy. I’m just a lucky and greedy guy. And that’s why I’m always able to team up with such amazing and talented artists. So tell all the other manga writers who are jealous of me to come challenge me in Jump! [laughs]

John Bae: Which is more dangerous to Senku and friends—nature or human nature?

Inagaki Sensei: Well, human nature is dangerous. But whether the characters already introduced are dangerous or not, even I as the creator don’t know that because they will move on their own as the series continues. With manga, the creator can tell a character not to betray anyone but they can refuse and do it anyway. So I have no clue what might happen. As for nature, no matter how dangerous it gets, Senku and friends will overcome it!

TEAM JUMP: How’s the process of working with Boichi Sensei?

Inagaki Sensei: I send him the storyboards by fax or online, and then he draws the art while the editor relays messages back and forth. But one interesting thing is that Boichi Sensei is a real stickler when it comes to the science aspects. He’ll sometimes have questions about why something is depicted in a certain way and that leads to us all understanding it better. So I really appreciate that. Boichi Sensei probably knows more about science than I do.

TEAM JUMP: What was the thought process behind the shoes in Kohaku’s village?

Inagaki Sensei: I actually didn’t give any instruction on the shoes. The reason why they are like that is probably because Boichi Sensei thought those shoes would make her look cuter. I don’t know if there’s any more to it than that!

TEAM JUMP: Thanks for taking the time for this interview! 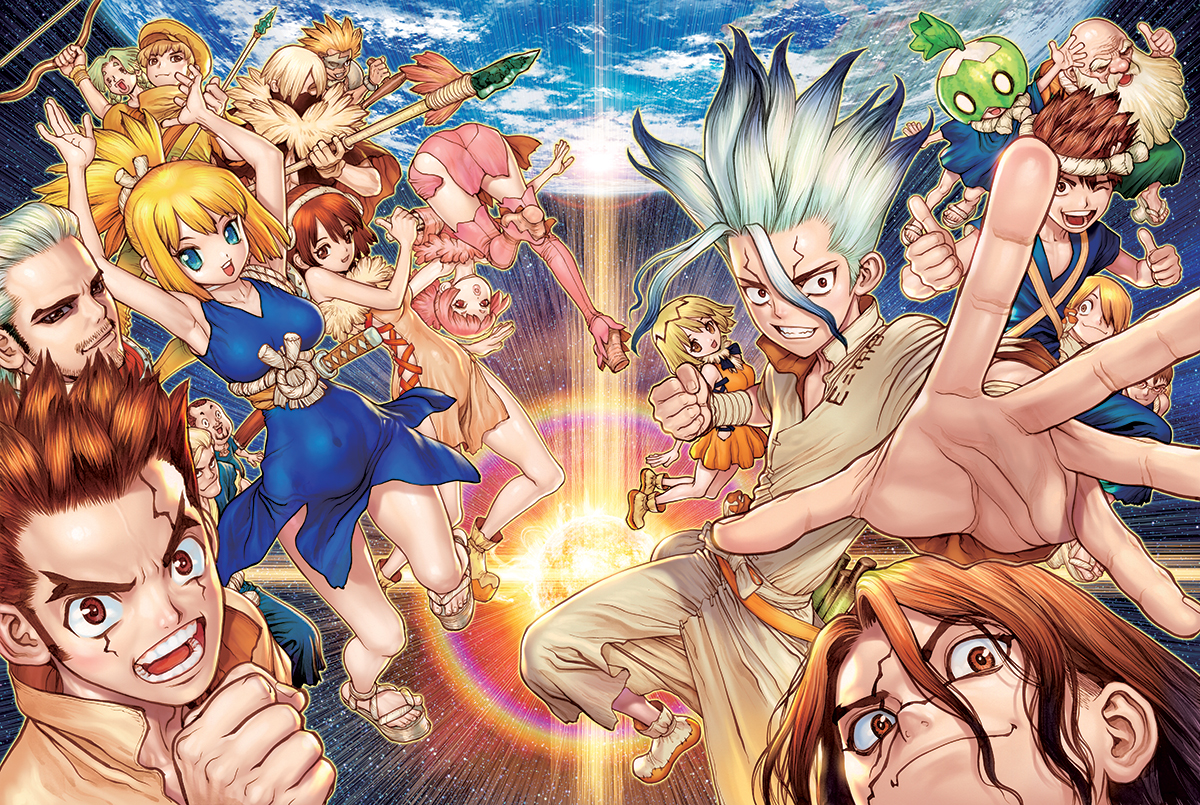 You can read the latest chapters of Dr. STONE free and same day as Japan on viz.com, or you can download the Shonen Jump app!