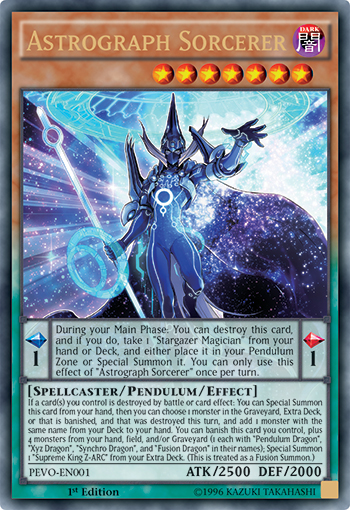 If you’re a fan of Yuya and his Pendulum performance in Yu-Gi-Oh! ARC-V, Pendulum Evolution includes some of the coolest Pendulum Monsters we’ve seen so far!

Astrograph Sorcerer is a Level 7 Spellcaster with 2500 ATK, 2000 DEF and a Pendulum Scale of 1. Its Pendulum effect destroys itself to take a Stargazer Magician from your hand or Deck and either place it in your Pendulum Zone or Special Summon it! Pendulum Monsters are powerful because when they are destroyed you can just Pendulum Summon them back from the Extra Deck, so if you’re trying to Pendulum Summon Astrograph Sorcerer you can just have it destroy itself and get a free Stargazer Magician for your Pendulum Zones.