The queen of Insects takes on a new form in Legendary Duelists: Ancient Millennium! The Metamorphosed Insect Queen has 2800 ATK and a bunch of powerful effects that are certain to “bug” your opponent. 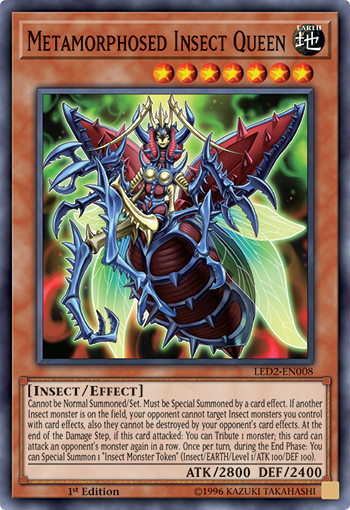 Metamorphosed Insect Queen hits hard and Special Summons monsters, all while protecting itself and the subjects of its Insect kingdom. Its 2800 ATK can deal a devastating blow to your opponent, but its ability to attack repeatedly will be especially irksome. After your Queen attacks, you can Tribute a monster to let it attack another of your opponent’s monsters.

Metamorphosed Insect Queen makes it tough for your opponents to eradicate your Insects, leaving you with plenty to Tribute for the Queen’s additional attacks. Thanks to her effect, if another Insect monster is on the field, your opponent cannot target or destroy Insect monsters you control (including your Metamorphosed Insect Queen) with card effects!

Metamorphosed Insect Queen can’t be Normal Summoned or Set and must be Special Summoned with the effect of a card. Fortunately, the Cocoon of Ultra Evolution makes it a breeze to Summon her. 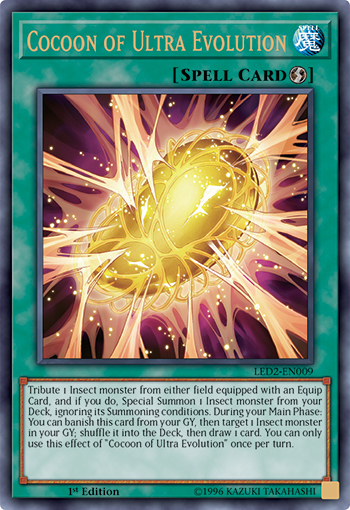 Cocoon of Ultra Evolution is a Quick-Play Spell Card that lets you cheat any Insect Monster onto the field in true Weevil Underwood fashion. It lets you Tribute an Insect (from either Duelist’s field) that has an Equip Card attached to it, and then Special Summon ANY Insect from your Deck, ignoring its Summoning conditions. The Cocoon of Ultra Evolution instantly causes an Insect to metamorphose into the monster of your choosing, including the Metamorphosed Insect Queen!

Metamorphosed Insect Queen and the Cocoon of Ultra Evolution from Legendary Duelists: Ancient Millennium transform Insect Decks to make them more powerful than ever before!