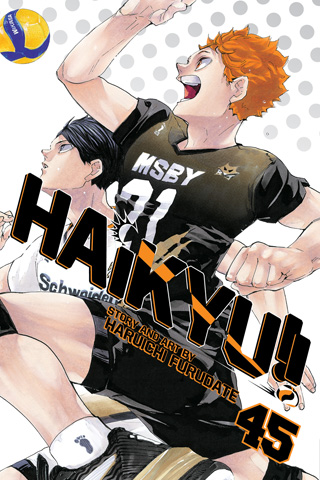 Time does fly, doesn’t it? See what I did there? Flying joke…because of the Karasuno team flag slogan! Anyway…I think it was around five years ago when I got the go ahead to start working on Haikyu!! , Vol. 1 . I was still pretty new to editing manga and this would be my first long-running project. I remember fighting tooth and nail to get to work on this series too. I loved Haikyu!! even before I started working for VIZ. I even cosplayed Hinata in 2014 with a friend when I was living in Japan for a summer internship while I was in college. Hinata was always super relatable to me. He’s short, I’m short. He’s wide-eyed and super energetic, I’m tired and grouchy…I think the similarities end at our heights, though Hinata’s actually quite a bit taller than me…

Anyway, point is I loved this series so much and getting to work on it was a dream come true! The project evolved a lot over the years too. What started as one volume a month turned into a bi-monthly release and then we got to the serialization when the Shonen Jump platform switched over. It was a lot of work, but honestly it was super rewarding and I learned so much from my work on this series. Like, the amount of time I spent learning about the rules of volleyball and the terms in both English and Japanese to make the localization process easier was insane. I can watch a real volleyball game now and understand what’s happening. I learned a lot as a manga editor too and I’m so grateful to have been given the opportunity to work on and finish out one of my favorite series of all time. 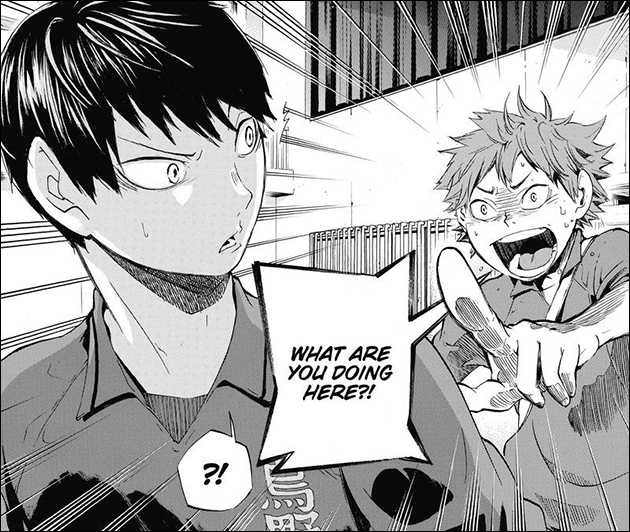 I guess this goes without saying though, but…spoilers for the last volume (and major parts of the series) ahead!

Volume 1 seems like ages ago, but Hinata started off as a middle school student back then. He loved volleyball but was pretty terrible at it outside of his ability to jump really high. Reading his journey from that little middle school kid to becoming an Olympic volleyball star. That’s quite the journey, right?! This series is written in a way though that you really don’t need to know much about volleyball to enjoy it. It’s always been, at least to me, about watching everyone overcome obstacles, succeed, and improve.

You really just want to see everyone be happy, even the characters on the opposing teams! Like when Nekoma lost to Karasuno, I still wanted Nekoma to win too! I wanted Kuroo and Kenma and everyone to go on and keep playing as well. But you can only have one winner, right? I’ve always felt this way about this series though. While it’s a sports manga, it really is written in such a way that it doesn’t matter if you get what’s happening in the game or not. You can feel the characters’ excitement and emotions and you get wrapped up in the action yourself and the game is over before you even realize it. Like you feel like you were out on the court with them—that’s how engaging this series is and what makes it so special. And I think many of you readers out there can agree with this feeling to some extent. Haikyu!! fans are some of the most passionate fans out there from what I’ve seen. And I think it has to do with how easy it is to just love the characters in this series and want them all to win and have fun!

The final volume finishes up the exhibition match arc and solidifies Hinata’s future in volleyball. He has come such a long way for this moment! Even in high school, it took for him being a ball boy at a training camp to really start to solidify his receiving skills. And he kept learning more and more in his games against Inarizaki, Nekoma, and Kamomedai! Speaking of…did anyone else cry a bit when Hinata was benched in the Kamomedai game, and he had to watch his team lose from the sidelines? Legit like…my heart broke. After that though, he went on to play beach volleyball and got even better! I gotta say, that arc was really surprising for me. I didn’t expect it at all, and it was really enjoyable to see Oikawa come back! It’s also interesting to see a bunch of the characters even learning different languages as they move to different parts of the world. And thank goodness someone at VIZ knew Portuguese because I was a bit lost there! 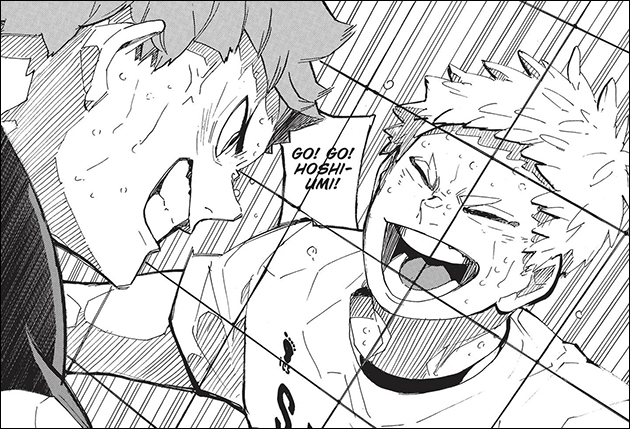 Continuing on though, can we talk about the exhibition match a bit? So, not gonna lie, I love the Miya twins. Especially Atsumu! And seeing him, Bokuto, and Hinata on the same team was honestly just…a moment. It’s really cool how at the end of the Inarizaki game Atsumu was all, “I’m gonna set for you one day!” to Hinata, and he really did! And seeing Bokuto grow up a bit was really nice too. Akaashi (who went on to become a manga editor?!) doesn’t have to worry about Bokuto’s attitude anymore! Now all he has to worry about is The Little Giant Tenma making his manga serialization deadlines! The conclusion of the exhibition match was really satisfying though. Seeing Hinata and Kageyama on equal footing together at the end there was really moving. They’ve both grown so much over the last 45 volumes.

I know I’ve been going on and on about Hinata, but Kageyama changed a lot too! He was always really good player, but his attitude wasn’t the best. He was the King of the Court…but, as I believe Tsukishima put it, he was more of a tyrant. He was mean, rude, demanding, and just expected everyone to keep up with him. But by the end of the series, he is much more of a team player. The way he interacts with Hoshiumi, Ushiwaka, and the rest of his team is a complete contrast to how he was in the beginning. He is still very much a King, in my opinion. But one who works with everyone around him. But that’s also what’s so great about Haikyu!! and Furudate Sensei as a writer. There’s so much character growth all around that the world really just feels alive. 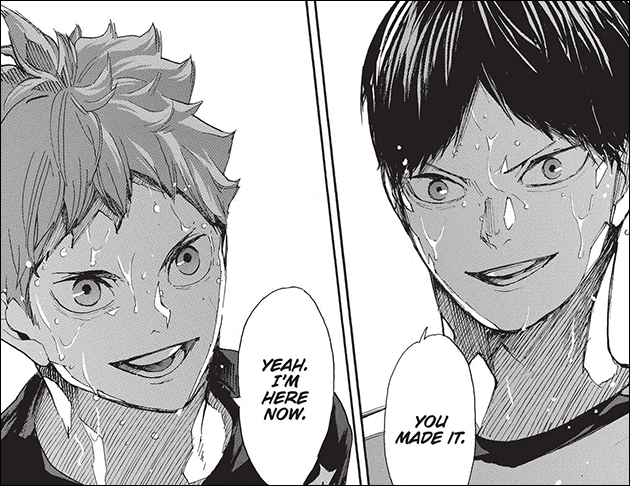 I don’t want to spoil anything further, but the last chapter really was just the icing on the cake. You get to see where everyone ended up after high school (and some of the reveals are pretty surprising!) and the conclusion is just…very conclusive. Like I felt satisfied with the ending overall. The main characters all reached very important heights in their careers and futures, and you know that in their world, they are going on to do great things off screen. But it also concludes the major growth of a middle school kid who had all the odds stacked against him go from a lousy player to a superstar. And I think that’s what makes this ending so satisfying. It’s over but it ends gracefully…at least more gracefully than the tears I shed finishing the last chapter for serialization, and then later finalizing this last volume for print.

All in all, Haikyu!! is a very special series. It’s a sports manga anyone can enjoy without really knowing anything about the sport itself. It’s a series that’s fun and exciting, with moments that will make you both laugh and cry. Every character is unique and has their own goals and desires. While Hinata and Kageyama are the main characters, every single person in this series matters and aren’t just in the background to support those two winning. And they don’t always win either! You care about everyone as a reader and watch as different characters rise, fall, get back up again, and fly! 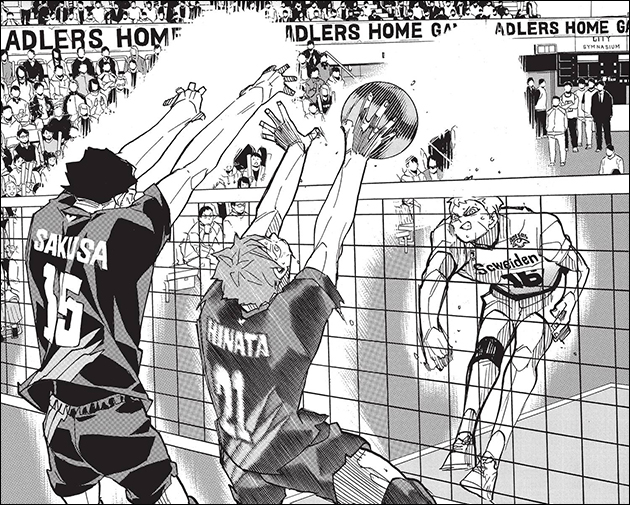 If you made it to this last volume already (and this part of my long-winded rambling), you know what I’m talking about. You get it. Haikyu!! is just amazing. Dare I say…the best? But if you haven’t read Haikyu!! yet or have been on the fence about it, I urge you to check the series out. In addition to the print volumes, with the last one out now, you can read the chapters on Shonen Jump for $1.99 a month (vault access is pretty sweet!) and check out the first three for free to get a feel for it. And if you’re feeling extra, well…extra! I encourage you to pick up the volumes when you get a chance. Every volume is available in print (and digital) now and it’s a masterpiece you’ll definitely want to own for yourself!

And thank you, Furudate Sensei, for all of your hard work and bringing these characters to life! You’ve made a huge impact on myself and fans all around the world. You’ve given everyone so much joy and excitement with your work, and I can’t wait to see whatever you come up with next! After a long rest first, of course!

“For a story that began in the limited world of Japanese high school club sports, I’m incredibly grateful that it was enjoyed by so many people, even far and wide across the seas. Thank you for playing volleyball together with me for 45 volumes!”

Order your copy of Haikyu!!, Vol. 45 by Haruichi Furudate here.