The premise of Assassination Classroom seems like it would be a sure candidate to never get released in the States. A whole manga about students trying to off their teacher?! But once you start reading this manga, you’ll quickly understand why it came out here and how pure-hearted it is. In fact, this is one of the sweetest manga you’ll ever read. And it’s all because of a lovable octopus-like creature named Koro Sensei.

The name Koro Sensei is a play on words meaning “unkillable teacher,” and that he is! But he must be killed or the planet is doomed! He’s blown up most the moon and threatens to destroy the planet. However, the governments have been thoroughly unsuccessful in their attempts and his insane speed and other powers make him the hardest of hard targets. And he’s made a very strange request—he wants a specific class of “losers” to kill him by a certain date. Why? That’s one of the great mysteries of the manga! 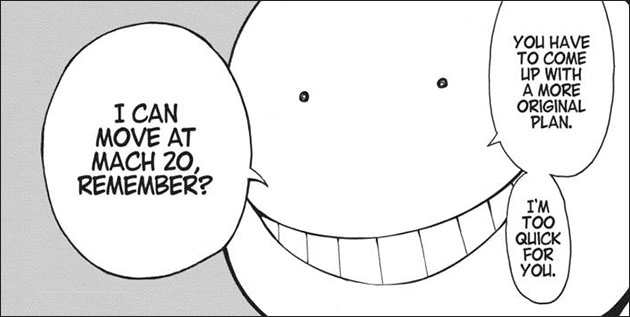 By the end of the first chapter, you’ll understand that Koro Sensei is a wonderful teacher who sees diamonds in the roughs in his students, now matter how society or even their families see them. And by the first book, you’ll see that this is a teacher that will do anything, or go to any length to ensure his students' success. Not by lecturing them, not by helping them with their homework, but by encouraging them to find more and more effective ways to try and assassinate him. And as the series continues, the students gain confidence in their assassination skills which spill over into other facets of their lives.

It’s also completely hilarious. Just looking at Koro Sensei’s hilarious character design is amusing enough, but the humor in the series functions on many levels. It's full of of slapstick, visual gags, absurdity, reaction humor, intricate comedic setups, well-planned jokes with hilarious pay offs many chapters later and more. The amount of humor packed into every volume is impressive and most of the jokes hit. Mangaka Yusei Matsui is a very, very funny man. 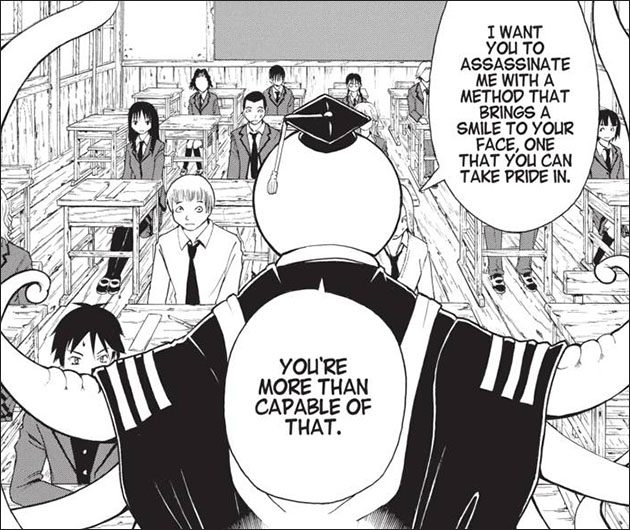 Aside from all the humor, the characters are great and all undergo serious growth throughout the series. Growth that feels real and earned, not given or contrived. And as the students grow and become more confident and skilled, Koro Sensei beams with pride as each assassination attempt gets closer and closer.

And as you progress towards the end of the manga, you’ll realize it’s not all tentacles and smiles, there is a real story here. I’m not trying to be hyperbolic, but it’s the kind of story that changes you as a reader. One that makes you appreciate life and your friends a little more. It’s also a story that will stick with you long after you’ve put the final volume down. 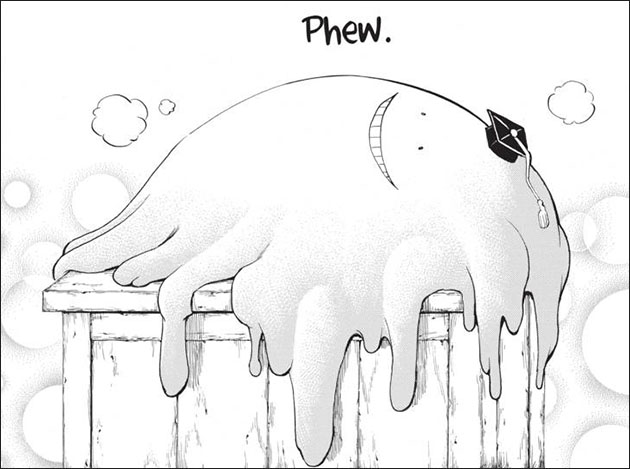 This is a special manga and this new box set makes it easier to collect than ever! Plus, look at that crazy giant yellow grin! That's gonna be the star attraction on your shelf. Comes with a sweet Class 3-E yearbook poster with a pic of every student and a full color mini-art book with tons of adorable color art. Don't miss this one of a kind story! 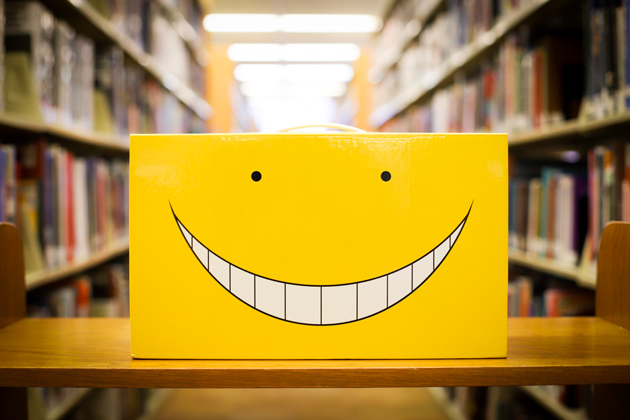