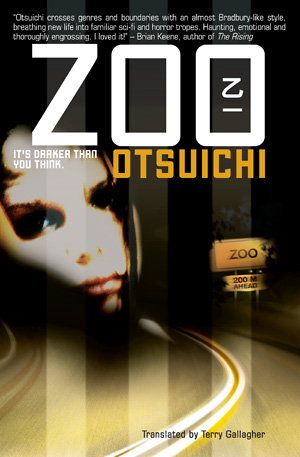 A man receives a photo of his girlfriend every day in the mail...so that he can keep track of her body's decomposition. A deathtrap that takes a week to kill its victims. Haunted parks and airplanes held in the sky by the power of belief. These are just a few of the stories by Otsuichi, Japan's master of dark fantasy.

In a Park at Twilight, a Long Time Ago

When I was in elementary school there was a park in my neighborhood. Because it was surrounded by tall buildings, you could visit the park at twilight and the sounds of cars and the hubbub of people would completely disappear. It was the kind of park that offered a small pocket of quiet in the big city.

When dinnertime came, and the friends I was playing with went home, I had to hang around the park waiting until my parents came and got me.

When I grew tired of the swings, I would go to the sandbox in the corner of the park and play. For some reason I always felt drawn to it. Most kids liked the swings and the slide better; the sandbox was often overlooked.

In the late afternoon the sunlight would come streaming silently between the two buildings and dye the world red. With no one to talk to, I was always by myself in the sandbox. I remember there was always a discarded yellow plastic bucket to play with. I took off my shoes and thrust my feet into the cool sand. It felt good to have the tiny grains between my toes.

Sometimes I liked to plunge my hands deep into the sand. I wanted to see how deep into the earth I could reach. With my arms straight down, I would dig as deep as I could until I was up to my shoulders. When I told my father this, he didn’t believe me. “Even the sandbox has a bottom, so how could that be?” he would say.

I thought my father was wrong. In reality, it seemed like the sandy pit was bottomless. I was sure of it. I had checked and double-checked numerous times.

I’m no longer sure how many times I had done this, but one day, when the tree in the corner of the park had turned to a black silhouette against the sunset, I was in the sandbox, thrusting my right arm up to the shoulder in the sand, and I felt something odd.

Something seemed to be buried in the sand. It was soft and it was cold. I wanted to find out what it was, so I stretched out my arm as deep as I could. I went so deep the very tip of my middle finger could just barely touch it. I could feel something plump and squishy. I wanted to grab it and bring it to the surface, but it kept slipping out of my grasp.

Pulling my arm out of the sand, I discovered several strands of hair clinging to my fingers. They were dirty and damaged by the sand, but I was sure they belonged to a girl.

Several more times I thrust both my arms into the sand trying to touch whatever it was that was buried there. But I wasn’t able to find it again, no matter how deep I reached. I felt sad.

In that twilight time of the day when the world was painted red, I could feel the surrounding buildings looming menacingly above me. It was like I was in a giant cage, just me and the sandbox.

Again I put my arm deep into the sand, and I thought I touched something. It was very faint, much like a small fish nibbling on my finger.

Suddenly something in the sand grabbed me. It fastened tightly around my wrist. I tried to pull my arm out, but I couldn’t budge it. It was like I was fastened in place. No one else was around, so even if I called for help, my voice would just echo off the buildings that surrounded the park.

Deep in the sand something opened my clenched fist with an irresistible force. In the palm of my hand, I could feel a very small fingertip. It moved across my palm in a regular pattern, and I was sure it was writing letters. It said:

Someone was writing this message on my palm. I thrust my other arm deep into the sand, and on the back of the hand I wrote: “I can’t.”

My hand was immediately released. I felt a wave of sadness come back at me. I pulled both my arms out of the sand and went home. After that I steered clear of the sandbox. Later, when the park was torn up to make way for new condominiums, I went to check out the sandbox. My father was right, it was not very deep at all. There was no way anything could have been buried there.