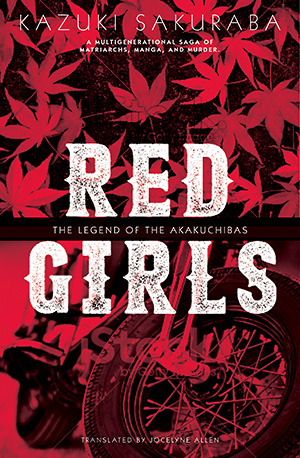 When the Outland People abandoned a baby girl on the outskirts of a village, few imagined that she would grow up to marry into the illustrious Akakuchiba family, much less that she would develop clairvoyant abilities and become matriarch of the illustrious ironworking clan. Her daughter shocks the village further by joining a motorcycle gang and becoming a famous manga artist. The Outlander’s granddaughter Toko—well, she’s nobody at all. A nobody worth entrusting with the secret that her grandmother was a murderer.

Manyo looked out of place in the village and when she went into town, but the young couple took care of this strange child, occasionally severe, occasionally affectionate with her. They also sent her to school, but for some reason, Manyo could not manage to learn her letters. “I can’t read,” “I can’t write,” she would say; her studies were of no use.

She would instead make strange predictions every now and then. At that time, the Third Jurisdiction Corps of the National Police Reserve (later known as the National Safety Forces), which was cre­ated by MacArthur after the war, was stationed in Izumo in Shimane Prefecture, and each member carried a carbine thanks to a loan from the US military. The corps was basically made up of young people of that generation, born in the area and also coming in from other regions, who had missed out on deployment to the front. The carbine, a mysterious weapon from which fire erupted, naturally terrified the villagers. Even now, the provincial culture of the Edo period lives on in the village. When someone commits a crime, the people rally at the village headman’s house, use spears and nets to catch the criminal, and then turn the offender over to the authorities.

When the young men in their khaki uniforms swaggered into town, clutching their carbines, little, illiterate, dark-skinned Manyo pointed at one of them, and said, “Be bright, scatter.”

The young couple didn’t think anything of it at the time, but when they were told that the gun of a National Safety Forces soldier had exploded late that night, killing the soldier, they cocked their heads to one side. All Manyo said when they asked her about it was, “’Be bright, scatter.’ I saw it.” This was a child talking, and so the young couple decided not to concern themselves with the matter any further, but the point here is that Manyo could, from time to time, in some strange way, see the future. Perhaps this was the real reason the outlanders had left her by the well that morning.

Every now and again, Manyo saw the future. This apparently happened most often when she was in a high place. She had seen the bright scattering of the dead man while the husband of the young couple walked around with her on his shoulders. And whenever they went up the mountain or to the top of the hill to a prosperous area known as Takami, the future would abruptly pass before her eyes. People died, were born, had serious accidents. Little Manyo simply watched it happen. She was a child, after all, and given the young couple’s reaction when she saw the dead man brightly scatter, she figured it would be better not to talk about the visions too much. In the majority of cases, Manyo kept her mouth shut. And most times, the future she saw wasn’t clear; she often didn’t know what was happening.

And then the summer she was ten, Manyo saw the man flying up in the sky for the first time.

This man was not young. Or rather, although he looked young, Manyo later thought he was probably middle-aged. In any case, it wasn’t as if there were all that big of a difference between the ages of twenty and forty to a ten-year-old girl. He was an adult man who seemed sad somehow. That was Manyo’s sole thought. He was wearing clothing the color of dry leaves. Small in stature, he had just one almond eye in the flat, pale face characteristic of the region. That is, only the left eye was open wide; the right stayed firmly shut, looking like it had merged into the smooth skin around it.

The man hung lightly in the faintly peach-colored dusk.

His thin lips parted, and he whispered something.

A phantom, Manyo thought. Though attending school, she was still illiterate. She had a hard time making any friends, looking as strange as she did and basically unable to do anything in class. The wind played with the black hair flowing down to her waist as she walked briskly along the village road. She was taking a shortcut, so she was halfway up the hill to Takami when the man suddenly appeared before her eyes.

He floated in the air facing downward, almost as if he had fallen from the sky, both hands spread out, and he stared intently at Manyo from directly above her. The man stayed there for a while, against the background of the peach sky, but he eventually receded and then disap­peared, sucked into the darkening evening sky. About to call out for him to wait, Manyo snapped her mouth shut. She knew that this was the future. She didn’t know what it meant, but the one-eyed man was fly­ing. She understood that it would happen someday. That evening, when she saw the one-eyed man flying, little Manyo for the first time became conscious of the fact that she was Manyo, seer of the future, clairvoyant, freak. And that one day, she would meet the strange man with one eye who had appeared before her as a phantasm.

That was perhaps Manyo’s bizarre first love. Fall came after, then winter, then spring, and still Manyo thought about this phantom man. She named him “One Eye.” When evening fell, she would climb the hill to Takami, wondering whether she might not see some other future too, and she would focus her eyes off in the distance. But this phantom did not show itself to Manyo again. It was another ten years before One Eye, who lived peacefully in Manyo’s heart, appeared in front of her in reality as a man with an actual, genuine body.

And it would be a looong time after that before the man would “fly” the way Manyo saw him fly.