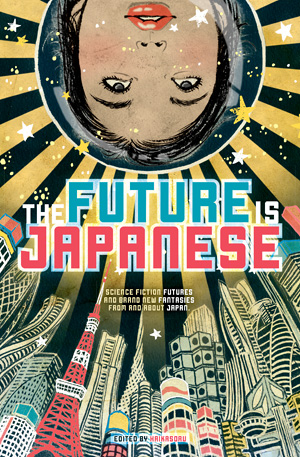 A web browser that threatens to conquer the world. The longest, loneliest railroad on Earth. A North Korean nuke hitting Tokyo, a hollow asteroid full of automated rice paddies, and a specialist in breaking up virtual marriages. And yes, giant robots. These thirteen stories from and about the Land of the Rising Sun run the gamut from fantasy to cyberpunk and will leave you knowing that the future is Japanese!

If you like The Future Is Japanese, VIZ Editors recommend:

The Future Is Japanese - Excerpt

From “Autogenic Dreaming: Interview with the Columns of Clouds” by TOBI Hirokata

"I didn't kill her. She did it herself," Jundo says.

"She used your knife to stab herself in the throat."

"Your teacher had no reason to kill herself, of course. She had a warm family life with a husband, a daughter in fourth grade, and a son in kindergarten. She was happy."

"She had her reasons. We all do. I just gave her a little encouragement."

"You manipulated her. No threats, no hypnosis, just conversation—"

Jundo had the ability to drive people to suicide with nothing more than conversation. This he confirmed in writing before his death. If it struck his fancy, he could make you take your own life, no matter who you were.

Seventy-three victims. His final testament bore a list of their names.

Each one had proved to be a real person. They each had had a relationship with Jundo, just as he stated. He knew the time and manner of each death. Yukiko Tsuge was his eighth victim, which meant Jundo had already wielded this power as a child. His first victim was the father of a classmate, a man widely known for making violent threats. On his way to work, he jumped the center divider and plowed head-on into several other cars, dying instantly. The evening before he was killed, he had been talking to Jundo.

Some victims took their own lives on the spot, others committed suicide months or years after their conversation with Jundo. According to his testament, he found it amusing to force people to recall long-forgotten personal secrets and sins. Then he would bore in and finish them off.

Jundo's testament reproduced an example, a fragment, of one of these exchanges. It ended in the suicide by poison of a fellow writer his age. Everyone who read the account was struck by a physical conviction that it was genuine. It was as if the letters Jundo used to record the conversation began to move like insects on the page, crawling under the nails of the hand holding the document. The quiet abuse he unleashed on his victims is still under analysis by more than one organization.

"Not always." Jundo looks annoyed. "Words weren't enough for Mrs. Tsuge. She was obstinate. She wouldn't go over the edge until I gave her my ear. It was never that difficult before. That was my biggest disgrace. The worst stain on my record. I made up my mind never to repeat such a blunder. So you see, my missing ear is the core of my identity. But you've grown it back. You mock my dignity."

He doesn't look as angry as he sounds. His eyes are a mix of boredom and irritation with a trace of interest. A viscous look, something slowly mixed together and congealed, like the film on a bowl of porridge gone cold. That disturbing gaze, the one that comes to mind when anyone hears the name Jundo Mamiya.

"The ear of a child on an adult's head. The technology to do that without the slightest effort is the core of what I am. You regard yourself very highly, but you can't even escape this room with no locks. From where I sit, you're a nonentity."

"Then maybe you'd like to do it again? I can't give you a razor, but you can always tear it off."

"Tell me to tear it off. I'll probably use all my strength to do it."

This surprises me, frankly. Jundo is nearing the core. No, he's already there.

"I'm sure you would. You are completely in our power."

"‘Our power’? I see." Jundo never misses a detail. A man who can kill with a few words. Superhuman profiling ability. "This is some sort of project, isn't it? And I'm one of the inputs."

"You regenerated my ear. You control me completely. Dress me in clothes I can't take off. How can such technology be?"

"You yourself are the proof its existence." I manage to force that one out.

"At minimum, I seem to have no physical existence. Are you using some kind of emulator?"

"In a sense. But you know that simulating a real person's body and their mind and actions would be impossible. It's far too complex. Especially when the person you want to simulate has been dead for thirty years."

My function is to draw Jundo's attention to the fact that he's dead. That he is not of this world. That nevertheless, our literal technology has given him a brief resurrection.

We agents—thousands of us deployed throughout GEB—are each delineating thousands of Jundo Mamiyas. I am speaking to one of them. I speak to spark awareness.

You are one of the dead.

"And what if I'm not a simulation?"

The dead man, the monster, the Ahab, gets out of his chair and faces me. Small and tough. He stands relaxed, like a veteran judoka. The tall, narrow window behind him is turning the color of boiled pine pitch. Night is flowing in. Night air seems to rise from Jundo's body. I try to speak, but I only mumble. Is he controlling my will? Jundo takes a step forward.

"In that case, what are you doing?"

I sense that Jundo has already reached this conclusion, but I speak anyway.

I have prayed every day since we parted in the civil war
In this remote village
Where Fernando, the girls and I struggle to survive

Except for the walls, this house has changed completely
What could have happened to all the wonderful things we had
I say this not out of nostalgia
That is something I have not been capable of feeling for years

So much that we knew was lost, so much has been destroyed
Only sadness remains
Along with the things we lost,
I think we have also lost the strength to live life fully

I don't know if this letter will reach you
The news from outside is so sparse, so confusing
Please let me know that you are alive

All my love
—Teresa