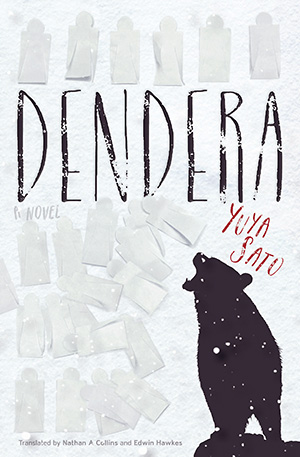 When Kayu Saitoh wakes up, she is in an unfamiliar place. Taken to a snowy mountainside, she was left there by her family and her village according to the tradition of sacrificing the lives of the elderly for the benefit of the young. Kayu was supposed to have passed quickly into the afterlife. Instead, she finds herself in Dendera, a utopian community built over decades by old women who, like her, were abandoned. Together, they must now face a new threat: a hungry mother bear.

“Dendera is riveting, hilarious, dark, gory, and absolutely brilliant...it’s as if Elena Ferrante and Stephen King collided on a Japanese mountaintop.”

Belka, Why Don't You Bark?

Makura Katsuragawa placed her hand over her nose as if to cover up the ravages of frostbite. “You’ve been saved,” she said.

“Saved? What does that mean, saved?” Kayu Saitoh asked.

“Well, this isn’t Paradise, if that’s what you mean.” Makura Katsuragawa grinned. “We’re on the other side. Of the Mountain, that is. The Mountain’s between us and the Village. So the Villagers won’t find us here. It’s a good place. Now isn’t that a comfort?”

Kayu Saitoh had never thought about life outside the Village during the seventy years that she had resided there, so Makura Katsuragawa’s words gave her a new shock. She understood vaguely on a theoretical level that there were places outside of the Village, of course, but the idea that she herself was no longer in the Village was beyond her comprehension, in the same way that she understood that birds could fly but couldn’t imagine flying herself.

“So you Climbed the Mountain too, right, Kayu?” Makura Katsuragawa lowered her face. “I was mighty sorry to see you in the state you were, collapsed in a heap at the top. But everything’s all right now. We dragged you along to Dendera.”

“That’s what we call this place. When I was dumped in the Mountain eighteen years ago I was all afeared and cold, the crows were pecking at me, but then the people of Dendera saved me, just like you. Sasaka Yagi and Naki Sokabe and Nokobi Hidaka all Climbed the Mountain that year too, and all of them were rescued as well.”

“This place . . . has been here since before you Climbed the Mountain?” Kayu Saitoh asked.

“Just take a look around. Plenty of familiar faces, right? Of course, there are some who die here, and there are plenty we can’t get to in time to rescue, but there’s plenty that do survive, and here we are. And now you’re one of us! You’re one of the lucky ones! How does that feel?”

“What have you done?” Kayu Saitoh hurled herself onto Makura Katsuragawa, knocking the older woman to the ground. She wrapped her hands around Makura Katsuragawa’s neck and squeezed. “Why did you do this to me?”

The very idea that you could Climb the Mountain and not die offended Kayu Saitoh. And even worse was to make a place like Dendera and live there. It was unforgivable. Makura Katsuragawa was supposed to have gracefully parted from this world eighteen years ago. She was not supposed to be eking out a miserable existence on the other side of the Mountain. The very idea was sacrilege. Kayu Saitoh felt defiled.

If Kayu Saitoh were to go back to the Mountain now, even though she had never meant to come back down again, even though she had been brought down without her consent, the Mountain would know. It would know, and it would not allow her to move on to Paradise. The path to the next world was closed off to her forever. The thought of this had made Kayu Saitoh boil with anger. And she had needed to take the anger out on somebody, and that somebody was Makura Katsuragawa. Makura Katsuragawa was struggling to push Kayu Saitoh off her, but she might as well have been a rag doll for all the good her resistance was doing. Kayu Saitoh squeezed harder, digging all ten digits into Makura Katsuragawa’s neck. The other old women were watching the fray, though, and two of them leaped out and restrained Kayu Saitoh, pinning her to the ground.

The two old women holding Kayu Saitoh down were Hatsu Fukuzawa, who had Climbed the Mountain four years ago, and Somo Izumi, who had made the journey fifteen years ago. Kayu Saitoh’s anger was now directed at them. Weren’t they ashamed to be still alive after Climbing the Mountain?

“Calm down, Kayu. What do you think you’re playing at? I thought you only just woke up?” said Hatsu Fukuzawa, her foot planted firmly on Kayu’s back.

“Don’t you dare talk about me as if I’m one of you!” Kayu Saitoh howled. Her body was starting to work again; she was starting to feel again. She could feel the snow, cold, underneath her. She wasn’t supposed to be able to feel anything . . .

“Ka—Kayu,” Makura Katsuragawa sputtered out eventually between heavy coughs. She clambered up and looked at Kayu Saitoh warily.

“What’s this ‘Dendera’ shit?” Kayu Saitoh said. “Why are you all in a place like this?”

“What do you mean, ‘why’?” said Makura Katsuragawa, rubbing her neck where Kayu Saitoh had been choking her. “Because we don’t want to die. Why else?”

“Have you no shame?” Kayu Saitoh’s voice was full of hate, and Makura Katsuragawa scurried back into the crowd without listening to the actual words. Kayu Saitoh wanted to chase after her; she made a renewed effort to throw off the two old women who were restraining her. At the same moment a new figure arrived on the scene. She too was an old woman. She wore dog pelts over her grubby white robe. Kayu Saitoh recognized her. It was Hono Ishizuka, the old lacquer-tapper’s wife. She too had Climbed the Mountain—sixteen years ago. She too was supposed to be dead. She too was a gutless coward. Kayu Saitoh glared at her.

“Ah, Ms. Kayu. You are welcome here.” Hono Ishizuka looked down at Kayu Saitoh. “Violence, however, is not permitted in Dendera. The next time there is a violent outburst from you, we will place you behind bars. You shouldn’t cause such a scene. It makes problems for people. For yourself too. Now, you have been granted a new lease on life. Shouldn’t you show some gratitude for this?”