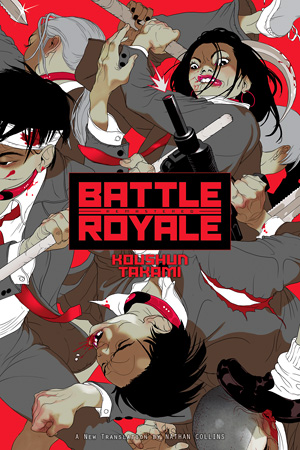 Koushun Takami's notorious high-octane thriller envisions a nightmare scenario: a class of junior high school students is taken to a deserted island where, as part of a ruthless authoritarian program, they are provided arms and forced to kill until only one survivor is left standing. Criticized as violent exploitation when ﬁrst published in Japan—where it became a runaway best seller—Battle Royale is a Lord of the Flies for the 21st century, a potent allegory of what it means to be young and (barely) alive in a dog-eat-dog world.

Yuko Sakaki raced up the stairs and was out of breath as she emerged at the top of the tower. The lantern room had just enough space to walk around the Cyclopean eye of the Fresnel lens in the center. The storm panes offered a view of the cloudy sky. To her left, a low door led to the outside catwalk. Yuko desperately opened the door and went outside.

This high up, the wind was stronger than she’d expected and smelled strongly of the sea.

The water unfolded before her. The sea reflected the overcast sky in a muted indigo upon which white waves wove an intricate fabric. Yuko moved to her right around the lantern deck. Across a small clearing at the front of the lighthouse, the northern mountain loomed. A little to the left, an unpaved access road wove around the base of the mountain. A lone white minivan had been left beside a meager gate at the mouth of the road.

Yuko held the steel railing. Beneath, she could see the roof of the attached single-story building—and of the room where she had been only moments ago. She followed the handrail around the lantern deck but did not find what she had expected—a ladder. She hadn’t taken a turn on watch yet and wasn’t familiar with the outside of the lantern room. There was no way down. She’d trapped herself in a dead end up in the sky. Panic nearly overcame her, but she gritted her teeth and fought it down. With no ladder, she’d have to jump.

Breathing heavily, she returned to where the building lay below, and she looked down again.

It was a long way down—not as bad as to the ground, but still a very long way. It was, in fact, too far to jump, but before she could reach a rational decision, that image flashed through her mind again. Only this time, the other girls were gone, and it was just her there with her head split open. Blood sprayed up and covered Shuya Nanahara’s face. She had to escape—no matter what it took. She couldn’t not escape. And she was out of time.

Yuko crouched down and slipped herself through one of the wide gaps between the posts in the carelessly constructed railing. Then she was on the other side. Holding onto the railing, she carefully stood on the ten-centimeter-wide lip of the balcony.

The view beneath her feet was dizzying. This is really high. I can’t jump from here. It’s high . . . It’s so high.

Suddenly her body jolted. Her foot had slipped. Below the hem of her pleated skirt, the side of her bare shin struck the edge of the con­crete walkway (she felt her skin scraping off), and her body was in air. She shrieked and flailed her hands and wrapped her arms around the bottom of a narrow metal railing post. The rest of her dangled below the balcony’s edge.

Her arms were wrapped around the pole, and she was panting for air. I almost . . . died.

Yuko swallowed and willed her arms to hold. Okay, first, I need to pull myself up and get back on the other side of the railing. Then I need to figure out a way I can stand up to Shuya Nanahara. That’s my only—

A strong gust of wind shook her. She let out a futile scream. Her hands slid from the steel pole and barely hung on to the edge of the concrete. The pole was beyond her reach now.

Her palms began to sweat. Overcome by terror and dismay, she began to panic. How how how how can I be sweating now? My hands— they’re slipping—

“No!” she yelled. Her ring finger went next. Then her whole right hand dropped. (She felt the nail of her pointer finger catch, but it broke, and that was that.) Her body swung in the air, pivoting on her left hand. And now that hand was—

She screamed as she fell. A dreamlike sensation came over her.

But then her arm jolted and pulled at her shoulder, and her drop halted less than half a meter after it began.

Dangling from her outstretched left arm, she looked up dumbly—and saw Shuya Nanahara, who was sticking halfway through the railing and had caught her by the wrist.

For an instant Yuko stared at him blankly. Then she screamed, “No!”

Of course if he let go, she would die, but it was Shuya Nanahara.

With her eyes open wide and her hair shaking wildly, she kept on screaming, and she thought, Why? Why are you trying to save me? Is it to use me to stay alive? Or . . . oh, that’s it. You want to kill me with your own hands!


“No! Let me go!” Whatever remaining traces of rational thought she possessed were in tatters now. “No! I’d rather die like this than be killed by you! Let me go. Let me go!”

Again she looked up at him, and then she noticed it. Blood oozed from the bandage around his neck, just below that silver collar, and trickled down his shoulder.

The blood dribbled all the way down his arm and onto her hand.

Shuya grunted and redoubled his grip. His face was clammy with sweat. And he wasn’t just hurt in his neck, but all over his body. Not only was he holding her weight with one arm, he was trying to pull her up. He must have been in extraordinary pain.

Yuko’s jaw dropped. Why? Why are you trying to save me, when it must hurt that bad? It’s because—

The answer came to her all at once. The black fog enveloping her mind cleared as if blown by a sudden gust of wind (much like the sea breeze buffeting at her now). Scattered was the image of Shuya holding that bloody hatchet as he gazed down at Tatsumichi Oki’s corpse. Once again, she saw the cheerful boy she used to know back in Class B until only two days ago. He was laughing as he traded jokes with Yoshitoki Kuninobu and Shinji Mimura. He was looking serious as he repeated a tricky guitar riff in the music room. He was grinning as he struck a victory pose from second base, after she’d happened to glance outside the gymnasium during volleyball in gym class and saw him make a perfect hit straight down the third base line. And he was gazing at her with concern, when in class, she’d turned pale from an attack of terrible cramps, and he gently asked her, “What’s wrong, Sakaki? You don’t look so good,” and interrupted their English teacher Mr. Yamamoto’s reading to get the attention of the nurse’s aide, Fumiyo Fujiyoshi.

Then another thought began to coalesce—what she had done, and what she had brought about. Again her face paled.

She started to cry. Noticing this, Shuya looked puzzled.

Tears filling her eyes, she looked desperately up to him. He seemed surprised.

She continued, “I—thought you killed Oki. I saw it. I was scared. I was so scared. So I tried to poison your food, but Yuka ate it. And then everyone . . .”

Now Shuya understood everything. She had been in some nearby bushes and witnessed him fighting Tatsumichi and pulling the hatchet from his face. But that was all—she hadn’t seen Kyoichi Motobuchi and Kawada show up. Sure, she could have interpreted it as self-defense or an accident. But she had been so completely terrified that she had no choice but to fear him. She’d tried to poison him, but Yuka Nakagawa ate his food by mistake, and all the girls fell into a paranoid panic. Only the poisoner herself survived.

Shuya was lying nearly flat on the concrete balcony, with his body passed between the bars of the handrail. With his left arm disabled, he couldn’t grab on to the posts. But he twisted his body and managed to tuck his right knee beneath himself to get leverage for his back muscles. Still holding firmly to her wrist, he began to pull. In his side, and his shoulder, and his neck, and every part of him that hurt, the pain surged.

She wrenched her hand about, trying to pull free. His firm grip on her loosened, and he quickly he squeezed tighter—but the blood trailing down from his neck made his hand slip.

Her hand left his. The weight on his arm suddenly vanished.

Yuko’s face, looking up at him, fell away.

Then with a thud, she was on her back on the roof of the building below. Rather than fall from his hand, she seemed to have appeared down there like a jump cut in a film.

Her body, in the sailor blouse and pleated skirt, splayed out on the roof, and her head was turned in an unnatural way. Her head appeared oddly distant from her body. A red splash extended from the top right of her head like an elongated, abstract-art maple leaf.

For a while Shuya remained there, his arm still hanging from the balcony as he stared at the sight below.