UPDATE (10/24/2013): Vulcan the Divine's shipping is confirmed and on its way out to Weekly Shonen Jump members! 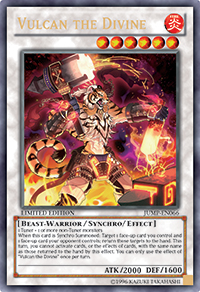 When this card is Synchro Summoned: Target 1 face-up card you control and 1 face-up card your opponent controls; return those targets to the hand. This turn, you cannot activate cards, or the effects of cards, with the same name as those returned to the hand by this effect. You can only use the effect of "Vulcan the Divine" once per turn.