Twin Star Exorcists is one of the most popular shows on Crunchyroll this season, and it’s no secret why. The series combines shonen adventure and comedy, rolling them together in a tight, fun package every week. The series’ opening features music by Wagakki Band, "Valkyrie–Ikusa Otome," accompanying the style that the show exudes.

The story centers on Rokuro and Benio, an exorcist duo who are fated to marry and have a child. Given the title of "Twin Star Exorcists," the two battle to protect humanity from vicious monsters known as Kegare.

Fans of the manga will be excited to see their favorite characters doing battle in full, flashy animation. The voice cast also breathes new life into the show's comedic moments, giving the show a lot more punch. Based on the manga of the same title, the anime takes the story in a new direction, which many fans have been enjoying. In only a few short weeks, Twin Star Exorcists has amassed a huge following, and it's still easy to pick up and enjoy.

Animation for the series is handled by Studio Pierrot (Naruto Shippuden), whose staff includes Tomohisa Taguchi (Persona4 the Golden ANIMATION) and Tatsuya Igarashi (THE UNLIMITED: Hyobu Kyosuke). The cast stars Natsuki Hanae (Kaneki Ken in Tokyo Ghoul) and Megumi Han (Hime Shirayuki in HappinessCharge PreCure!) as Rokuro and Benio, and also includes Ayumu Murase (Shouyou Hinata in Haikyu!!), Yu Serizawa (Yoko Shiragami in Actually, I am) and Junichi Suwabe (Keigo Atobe in The Prince of Tennis).

Twin Star Exorcists airs Wednesdays at 4 am on Crunchyroll. 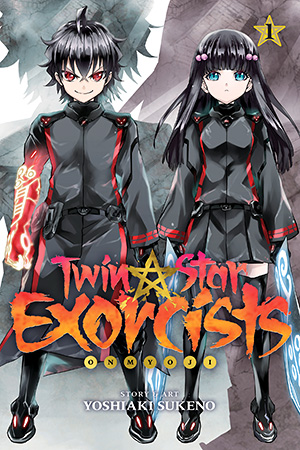