Even after the world and humanity itself have been rendered nearly unrecognizable by genetic engineering, a day in the office can feel…Sisyphean. 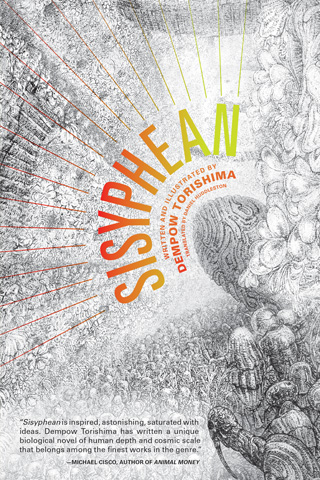 Enjoy this sneak peek from the new sci-fi novel by Dempow Torishima!

“…the complex endoskeletal structure exists apart from the exoshelleton, and at first glance appears to be entirely without purpose. In fact, I can’t see any use for it myself, and yet…”

“The round bones are used as wheels or cogs. But even so, Professor, I have to think that from our standpoint, momonji are put together just a little too conveniently.”

“That’s an important point, but it’s also a question that takes us into the realm of metaphysics. If you wish to pursue it, I’d suggest you transfer to the department of theology. Now, next is Mr.…”—Professor Shitadami turned toward the students and gazed across the classroom—”Hanishibe. What is this called, and what function do you think it serves?”

Hanishibe hadn’t heard a thing the professor had said, but when twenty-three classmates turned around to look at him all at once, he realized that he had been called upon. A dazzling beam of sunlight was being reflected into his eyes off the hairless, hard, and finely cracked cranium of Yatsuo, who was sitting with perfect posture in a seat in front of him and off to the side.

There were four rows and six columns of seats, and about half of the faces occupying them were far removed from the human baseform. In the case of Monozane the Truncated Dodecahedron, who was bubbling away contentedly in an aquarium on a front-row desk, Hanishibe couldn’t even tell what part corresponded to a face.

Grandpa’s really amazing, Hanishibe thought, impressed anew by the outstanding work his grandfather did. Although humans came in all shapes and sizes, he could see right away that they were people and took measures to resurrect them.

Hanishibe was fearful that even if he did manage to become a taxonomist, he might misjudge someone and make a mistake he could never atone for. He had long had a feeling that it wouldn’t be terribly unusual if people were found among the raw materials used in the mesenchyme-wrapped bones of the chair he was sitting in or among the ingredients of the broth that today’s rhinoceros meat had been served in at lunchtime. His fear of making such errors was supposed to be why he was studying in this taxonomy department to begin with, but for some time now, Hanishibe had been afflicted by a sense of unease that he couldn’t put clearly into words and had become unable to focus on his studies.

“Psst! The prof’s calling you!”

Spurred on by his classmates’ whispers, he looked up at the scowling face of Professor Shitadami, suspended in midair before the skinboard. The ridges that the blood sedges formed in his forehead were pulsating furiously, as was the swollen tumor in his left cheek.

The professor’s right antenna was indicating the outline of an unassuming ossiform folded several times over, buried in the backshell ossiform beneath the momonji’s skin. It wasn’t yet listed in this year’s textbook.

“It’s a wingtype ossiform,” he said. “During their descent from heaven, they deploy from the backshell ossiform and push the skin outward, forcing it to spread out and tighten, and can exhibit movements similar to those of a bird flapping its wings. It can’t fly, of course. Its original purpose, like that of the variable exoshelletons and the other unnecessary interior bones, are unknown, since the researchers are—”

“Precisely. Strange though it may be, they exhibit behavior like that of a flapping wing. All we have to rely on is the Book of the Heritage of the Hereafter, but it’s believed that the phylogenetic repetition that takes place up until a human fetus takes shape—changes in form such as the appearance of gills and tails—may contain the key to unraveling this mystery.”

“Well, that’s all for today. To those of you on cleaning duty: don’t forget to put ointment on the skinboard, and pay special attention to the spots that are festering. Next week, we’ll be dissecting a real momonji, so wear something you won’t mind getting dirty.”

Someone smarted off at that, asking what those who don’t wear clothes should do.

“Come prepared to molt,” the professor replied. As his students wryly grinned, Professor Shitadami shook his head from side to side, retracting his antennae. He then slid his school rulebook into his backsac, pulled on a hanging line, and descended silently to the hardbone floor, facing downward. He crawled out of the classroom on all fours like a baby.

Order your copy of Sisyphean today.