Uchiha Sasuke heads for an astronomical observatory, far from the Land of Fire. There, he syncs up with Sakura, and together they dive into an undercover investigation in search of traces of the Sage of Six Paths! They discover a plan that goes beyond life and death, and a battle that will test this husband-and-wife team till death do they part.

Read an excerpt from Naruto: Sasuke’s Story—The Uchiha and the Heavenly Stardust, the new light novel from the iconic manga Naruto. 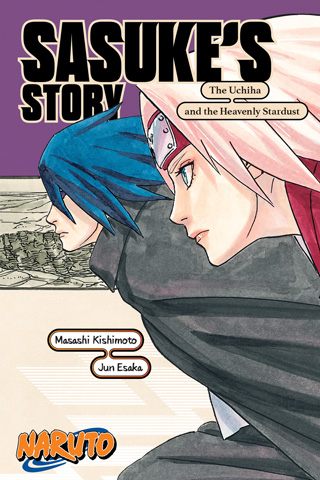 Teeth still plunged into the man’s body, Meno dropped to the ground lightly. He opened his mouth, and the body fell out.

The man tried to crawl away, but Meno stepped on him and violently flipped him over. He caught the man’s shoulder blade with the sharp claws of his forelimbs and dragged him out to the courtyard. Here he stopped, opened his bright red mouth, and bit into the man’s shoulder.

“Aaaaah!” the man shrieked and threw his head back.

His flesh ripped open, and the blood gushed and mixed with the blood still pouring from his stomach, creating a bloody pool on the ground.

Meno could have ripped the man’s head off or dug into his chest, giving him a swift death, but he instead turned the man once more and raked his claws down his back, pulling out threads of muscle.

Face pressed into the dirt, the man wept wretchedly.

Meno took his time with the would-be escapee and deliberately dragged the man into the courtyard so that he and this moment would be in full view of the other prisoners. It was a show, a message to the rest of the prisoners that they would meet the same fate if they also tried to escape.

The prisoners frowned as they watched from a distance while they shouldered their pickaxes.

Appearing to delight in shredding the man’s flesh, Meno at last began disembowelment. As the prisoners heard the slow dripping of wet guts and organs, the man’s miserable cries finally fell silent.

“Okay, that’s enough rubbernecking. Get to your posts already.”

The workers flinched in sync when they heard this low voice from behind.

A slender man in silver-rimmed glasses strolled out of a building. Zansul, director of the Tatar Observatory and the person ultimately in charge there, and Meno’s master.

“If you don’t hurry and get to work, I’ll give you to Meno for his dessert.” Zansul’s tone was casual but carried a note of intimidation that sent shivers down spines.

The prisoners grew very pale. They quickly scattered to take up their posts, and mixed among them, Sasuke secretly took a long look at Meno.

Leaning forward to bury his face in the skinned stomach before him, Meno waved his long tail back and forth for balance. The hard skin that covered his face was painted red, and his yellow eyes flashed brightly.