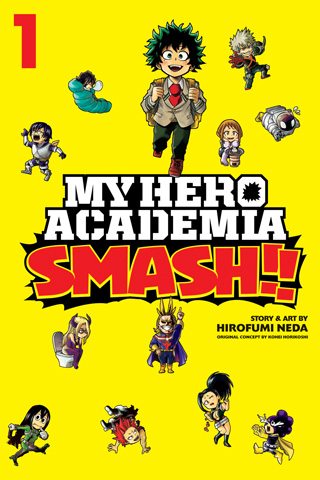 In the hands of Smash!! artist Hirofumi Neda, taking over for main series author Kohei Horikoshi, four-panel comics are the perfect format to recast the events of My Hero Academia in a comedic light.

There’s poking fun at classic lines like that “microwaving an egg”: 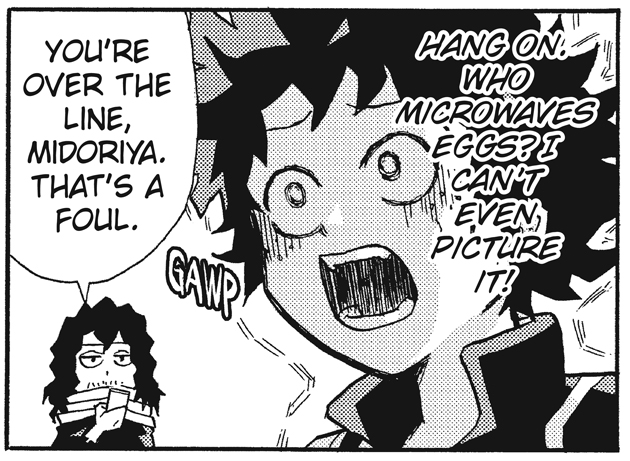 Certain topics that would be taboo in the main series get asked:

And my favorite strip is actually one starring the villains of the USJ arc as they invade, who have apparently bought tickets to USJ to get in: 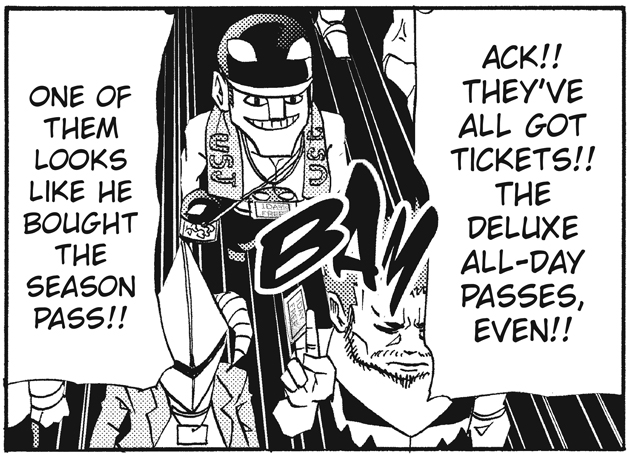 Volume 1 parallels the events of My Hero Academia chapters 1-22 (volumes 1-3, which is the same as the first season of the anime and concludes the USJ arc). Subsequent volumes of Smash!!, of which there are five in total, also advance along with the story, re-imaging a punchline for some of even the most drama-filled and touching moments as well as imagining brand new moments.

My Hero Academia: Smash!! is officially sanctioned by author Kohei Horikoshi, and he even contributes not-to-be missed bonus commentary and illustrations, including gender-swap art for volume 1!

There’s so much amazing stuff in volume 1 alone, from Deku clearing that infamous beach of trash by running a yard sale, Ida getting into the villain character TOO deeply during the rocket training, Deku’s mom getting as buff as All Might—YOU GUYS HAVE TO READ THIS TO BELIEVE IT! And although the humor can become a little off-color at times, it’s all in good fun and created by someone who knows the series very well. Also learn about Neda’s longtime beef with Horikoshi in the extras!

As someone who’s fallen into the position of being the four-panel comics editor at VIZ, and fresh off my stint working on Fullmetal Alchemist: The Complete Four-Panel Comics, I’m not sure I can recommend anything more highly than My Hero Academia: Smash!! What are you waiting for? Start reading!!