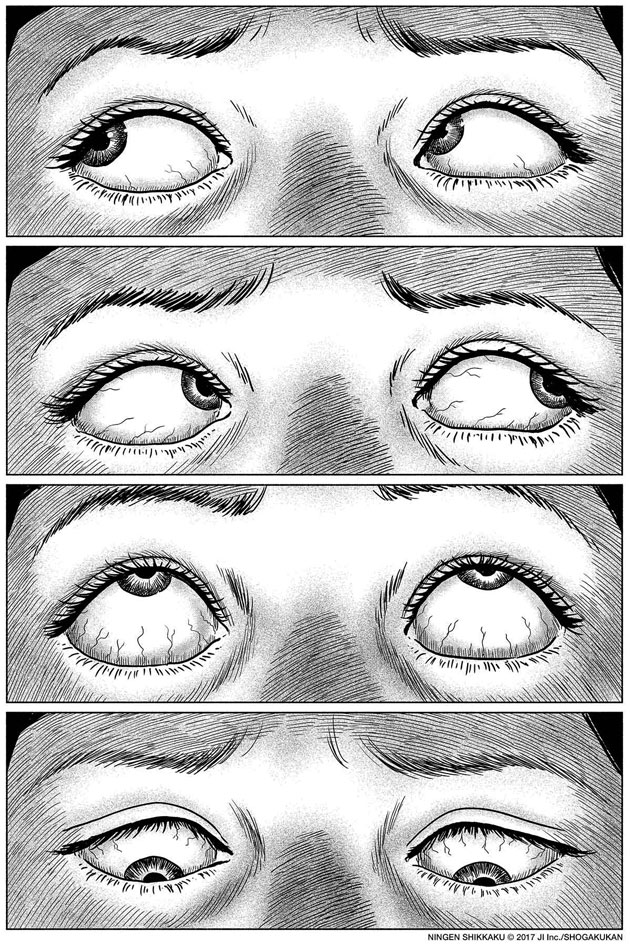 The desperate search for last-minute gifts is setting in. What do you buy for the horror fan who has everything? MinovskyArticle is here with a quick peek at the latest book from Junji Ito, No Longer Human. 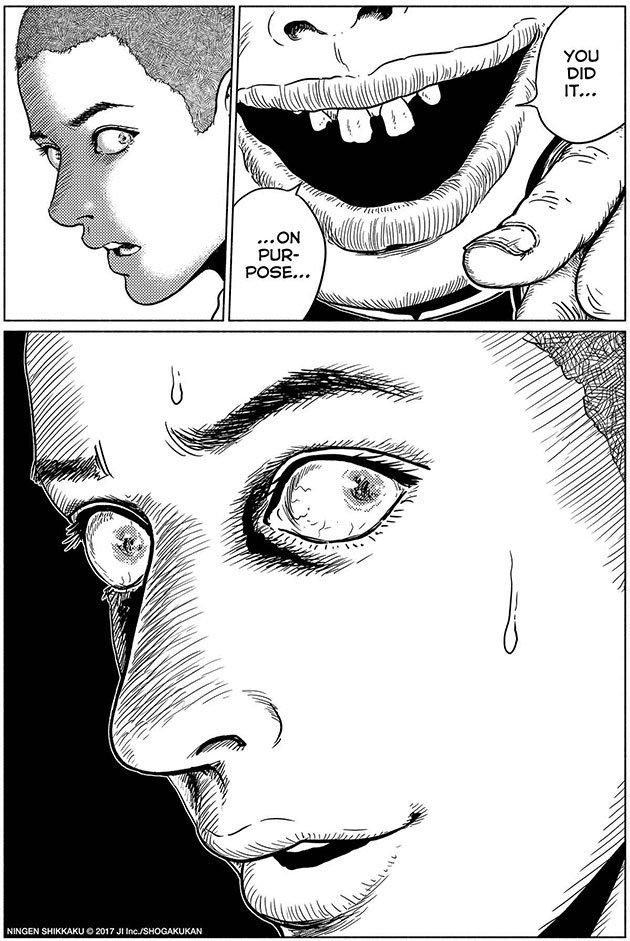 No Longer Human is Junji Ito’s manga adaptation of Osamu Dazai’s semi-autobiographical 1948 novel, No Longer Human, one of Japan’s all-time best-selling literary works. It tells the story of Yozo Oba, a young man who feels intensely alienated from the rest of humanity. 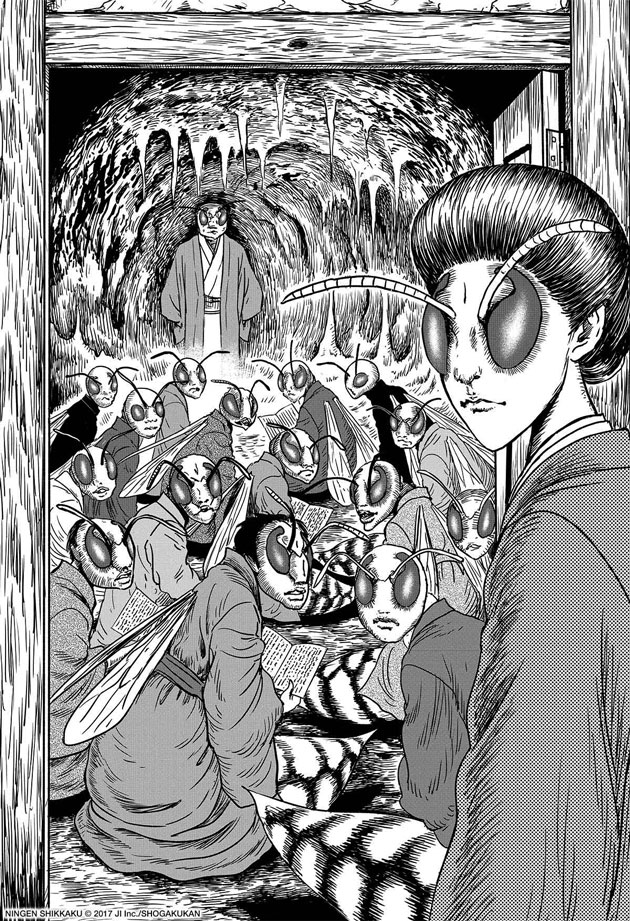 Yozo feels incapable of understanding or being understood by his fellow humans. Hiding the immense emptiness and isolation he feels behind a clownish yet charismatic persona, he lives in fear that others will see him for who he believes he is inside. Ito manifests Yozo’s insecurities and contempt for mankind on the comic’s pages in increasingly terrifying ways. 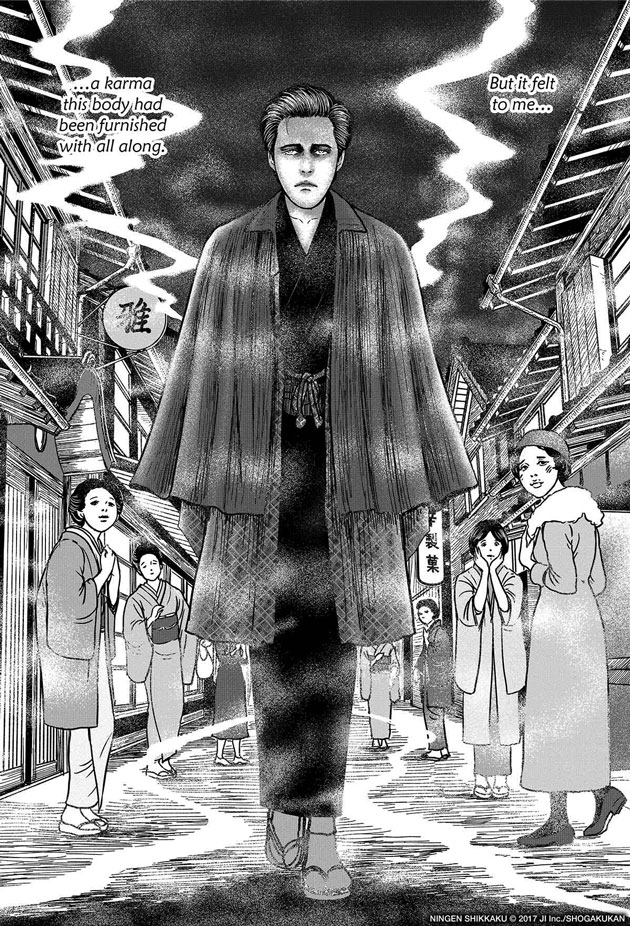 No Longer Human is an explicitly adult work. Yozo seeks constant relief from his misanthropic condition through sex, drugs, and alcohol. Ito doesn’t shy away from graphically depicting these addictions or the often horrific consequences of Yozo’s vices for himself and those he manipulates and exploits to satisfy his urges. 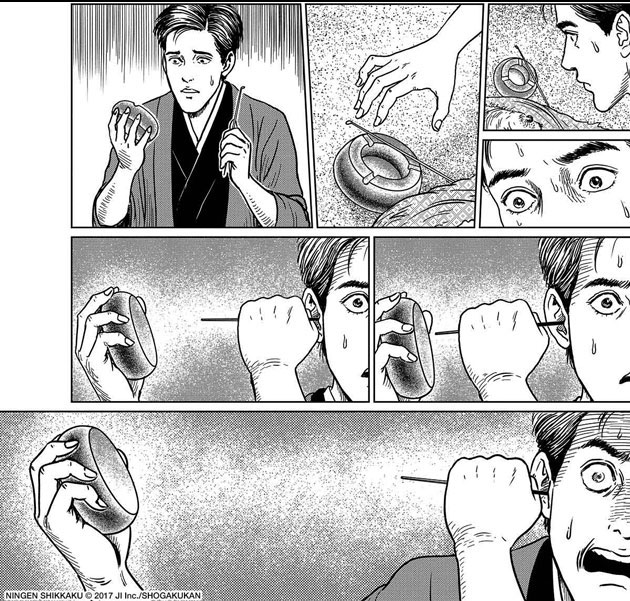 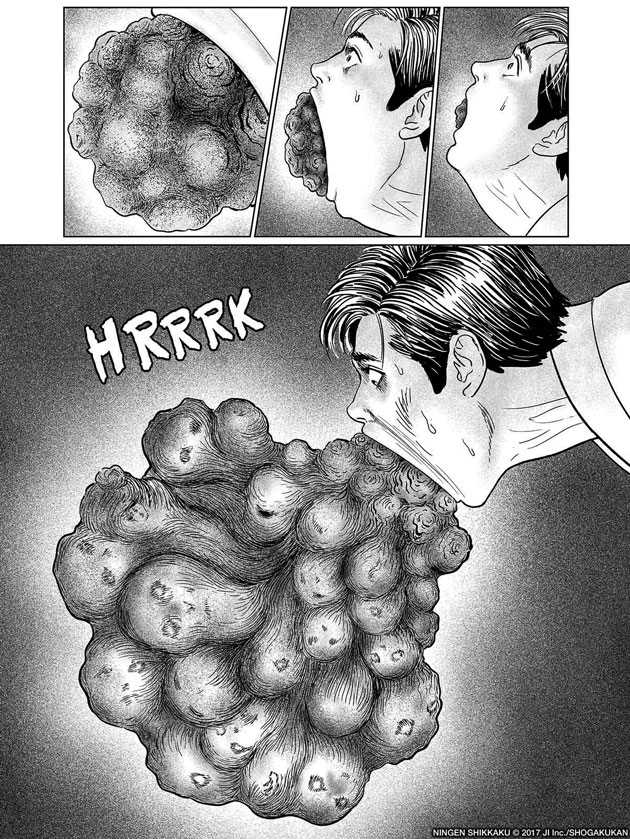 A chapter-length descent into a Buddhist hell of Yozo’s own making, where he must vomit up and confront the sins metastasizing inside of him, is a powerful and dynamically drawn journey. 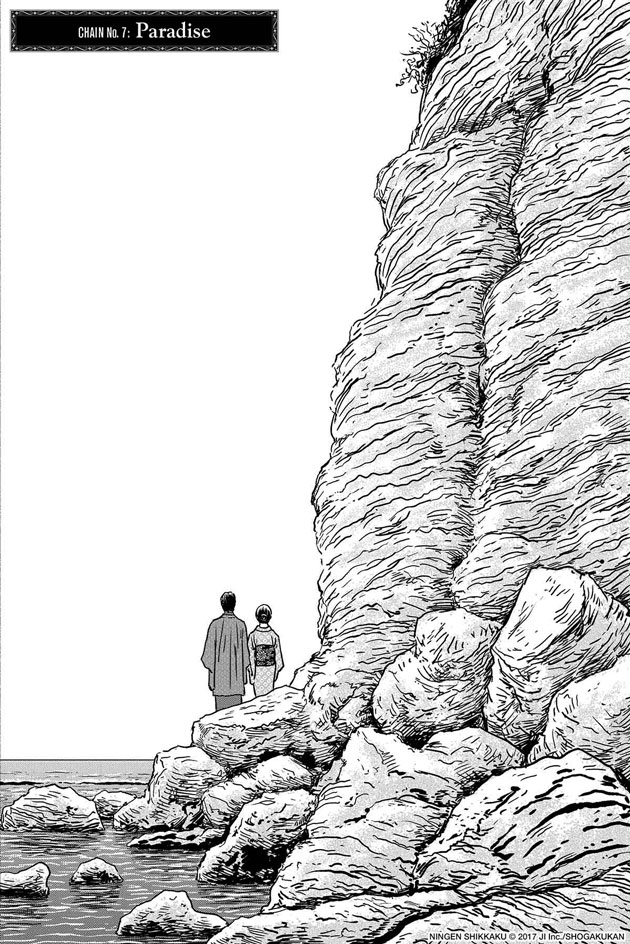 In adapting No Longer Human, Junji Ito could not ignore the lovers’ suicide attempts, which are defining features of the novel and the life of author Osamu Dazai. Ito adapts the buildup to the acts with an air of romanticism but depicts the deeds themselves and the aftermath as grisly, traumatic, and immediately regretted by everyone involved. 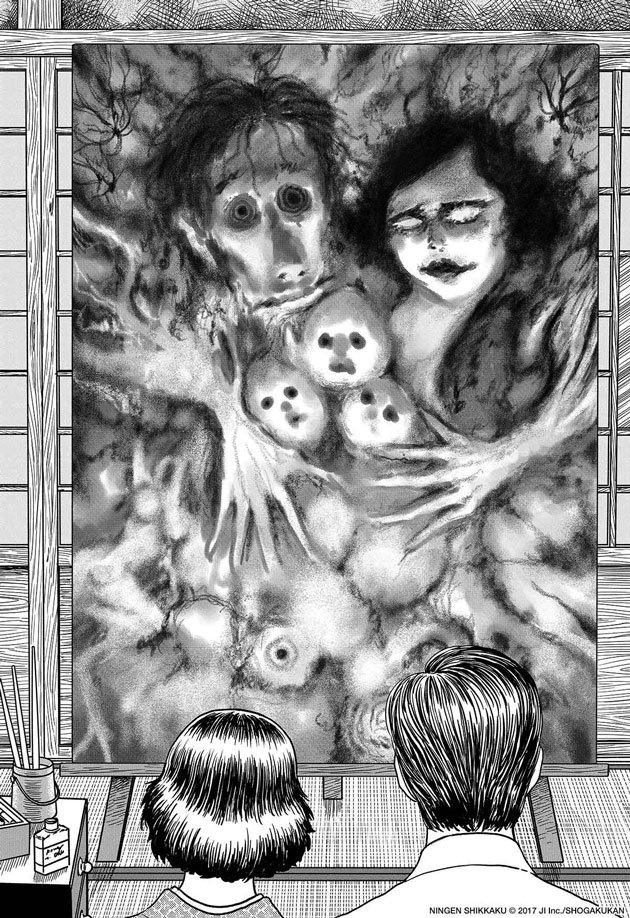 An appeal No Longer Human may hold for Ito (and fans of horror fiction) becomes evident whenever Yozo explores his existential angst through art. Self-portraits become grotesquely revealing but socially acceptable outlets for the feelings Yozo suppresses behind a smile. 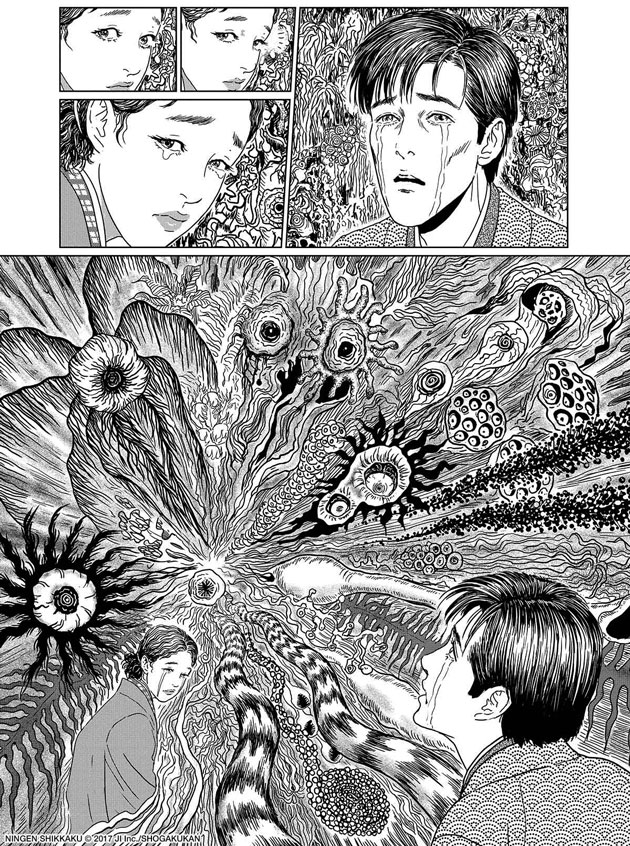 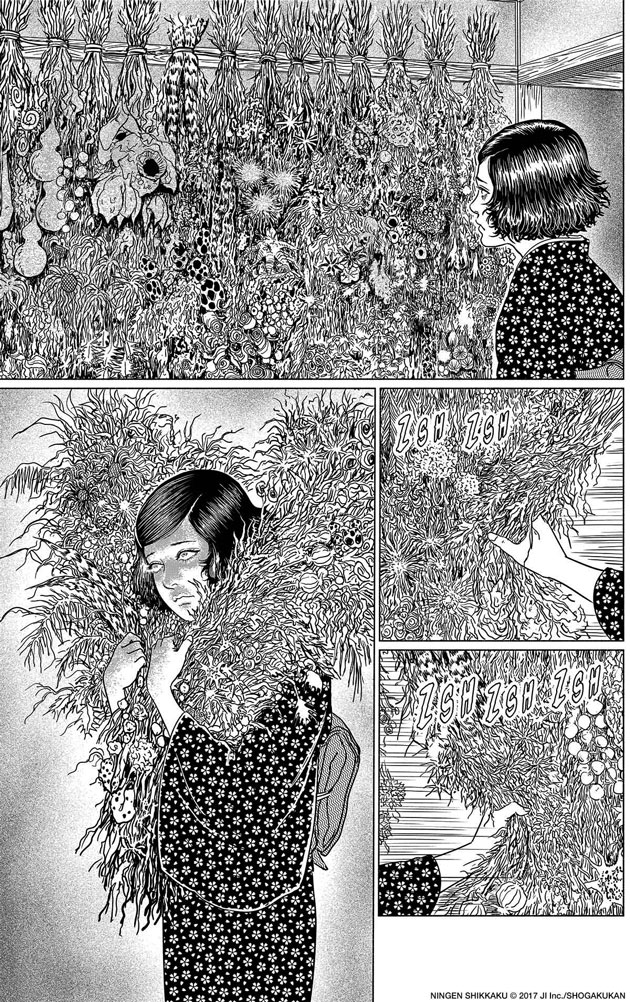 No Longer Human boasts some of Junji Ito’s most technically impressive drawings to date. A number of pages absolutely overwhelm the reader with their beauty and decadent detail.

To quote the art critic admiring Yozo’s portrait work, “Here, there is anxiety, there is fear, there is madness.” Whether you’re a devoted reader of Dazai curious to see how his novel would be adapted into manga or a loyal Ito fan with little to no familiarity with the source material, the combination of two of Japan’s masters of artistic unease is sure to leave you shocked yet satisfied.