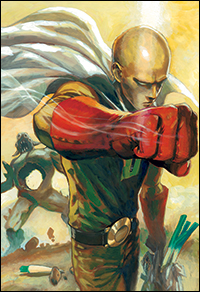 From the creative collaboration between famed artist Yusuke Murata of Eyeshield 21 fame and up-and-coming manga creator ONE, One-Punch Man will knock your socks off! The beat down begins in the 01-21-2013 issue of Weekly Shonen Jump!

Saitama is a seemingly average guy with a not-so-average talent—he's a superhero that beats the snot out of enemies...in ONE PUNCH! Problem is, he's getting bored destroying his opponents. Can he ever find someone tough enough to take him on?! Follow Saitama as he tears through the pages of the all-new Weekly Shonen Jump!

ONE
Manga creator ONE first created One-Punch Man as a web comic, where it quickly went viral, garnering over 10,000,000 hits! Along with One-Punch Man, ONE also writes and draws another series called Mob Psycho 100.

Don't miss out on this latest and greatest exciting series in Weekly Shonen Jump! Become a member today!