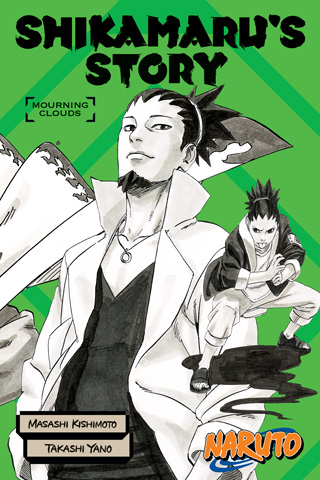 A rupture in the alliance at the Summit of the Five Kages could be the trigger for the Fifth Great Ninja War! Meanwhile, something is causing Shikamaru and his family to drift further and further apart. But Shikamaru has a very powerful card up his sleeve to bring peace to both the world and his family!

Here is a sneak peak from the new Naruto novel, available now.

He woke up just like always. No matter how late he went to bed the night before, he always woke up at the same time. This habit hadn’t changed from his days at the academy when he was a kid.

“Haah.” Shikamaru yawned, staring up at the familiar ceiling. “Hm?”

There was an unusual scent in the air. He sniffed at his clothes to find they were permeated with the smell of fried meat and cigarette smoke and remembered that he’d stayed out late drinking with Choji the night before, something he hadn’t done in a while. By the time he’d gotten home, it was the middle of the night, and naturally, Temari and Shikadai had long since gone to bed. But changing his clothes was far too much hassle, so he’d simply taken off his jacket and rolled onto his futon. Before he knew it, it was morning.

Most likely, the tub was still full of water, cold by now, of course. Thoughtful Temari. Even though she hadn’t known when he’d be home, she had no doubt heated plenty of water and put the lid on the tub to keep it warm for him to enjoy later. And now that he was thinking about it, he was pretty sure supper had been laid out for him on the kitchen table, covered in a cloth.

“Aaw, crap.” Choji’s invitation had been so sudden, he’d forgotten to tell Temari. He covered his face with his arm. “What a drag.”