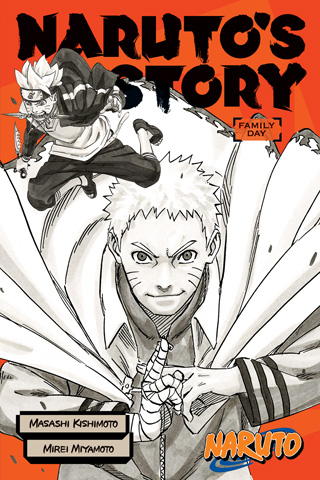 Learn more about this new Naruto novel:
To celebrate Family Day, Konohagakure's new holiday, Naruto and his daughter, Himawari, are on the hunt for an elusive must-have item. Hinata wants to make the day memorable for her family, and even Sasuke makes special time with his daughter, Sarada, and his wife, Sakura! At the end of the day, will Family Day be a success?

You can read along with the excerpt here:
“It would be so much easier if we could just chalk it up to her being at ‘that rebellious age,’” Sakura said, pulling a comb through his hair. “But I think with that girl, she really adoresher dad, more than your average kid. And she doesn’t get to see you very much, so she builds you up in her mind. You’re cooler than other dads, you’re stronger than other dads. Although I guess that’s actually true!”

She laughed, sounding embarrassed at how lovey-dovey this came across.

“When she catches just a glimpse of a less-than-great thing about you, she’s all the more disillusioned. Nothing to be done there, honestly. You give her so much to wrestle with.” She slowly brushed away the hair that had fallen on his shoulders. “Sarada still has no idea what you’re really like. I think you just have to be normal with her and not act all big and tough. As for what specifically you should do… Well, I don’t really know that either.”

The hand brushing his shoulder slowly came to a stop as Sakura continued, “Doesn’t she just want what you wanted from your father when you were a kid?”