In One Piece, the Straw Hat pirates have each been scattered to a different locale of their world. Now that the Paramount War is over and Luffy has mourned for his brother Ace, Luffy’s renewed his resolve to seek his crew out. However, Rayleigh Silvers, the former right-hand man to Gol D. Roger, knows they’re not yet ready to sail the deadly waters of the New World!

The cover to volume 61 lets us know that this leg of the Straw Hats’ journey is a turning point, as it calls back to the first volume with the current members of the crew reenacting that cover. But the similarities end there. After a quick check-in with the major players, the story skips ahead two years to the end of the main characters’ training and the beginning of the second half of their journey. 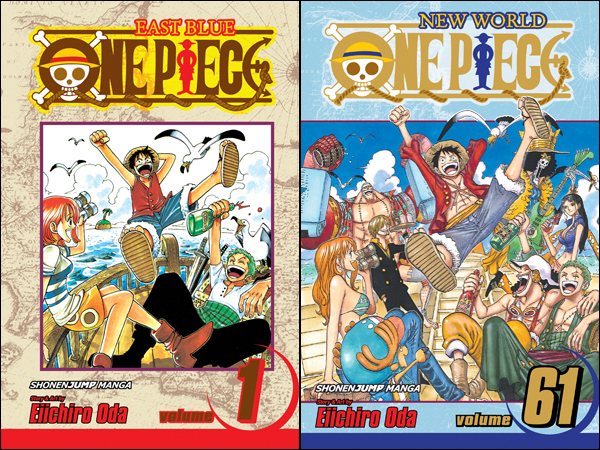 To say there’s a lot going on in this volume is putting it mildly—there’s glimpses of what the Straw Hats, the 11 Supernovas, and the various agents of the World Government have been up to in the last two years. And that’s not even getting into the diabolical new villains that have come on the scene to make trouble for our heroes! All in all, Oda Sensei does a masterful job of wrapping up the postscript to the Paramount War and giving a glimpse of what’s to come!

The Straw Hats have a new look and new tricks in One Piece volume 61, on sale March 6!