Welcome, lucky readers, to this brand-new feature in which editors from the various Weekly Shonen Jump series recommend their favorite chapters! You can learn all about their tastes in manga as well as some behind-the-scenes stories! In this installment, we’ll hear from the editor of Nisekoi, the romantic comedy hit that’s lighting up the airwaves as an anime!

Raku Ichijo is an everyday, average high school student, except for the fact that he’s the son of the Shuei-Gumi yakuza gang’s boss! He’s living a normal life, with a crush on his classmate Kosaki Onodera, until the day he meets Chitoge Kirisaki, the daughter of the Beehive gang leader, and their parents force them into a false love relationship in order to keep the peace between their feuding families.

Editor: Yu Saito
At Shueisha for nine years, Yu Saito knows the most about shojo manga in the editorial department. He loves this huge smartphone he’s holding up, and he calls it his JoJoPhone. 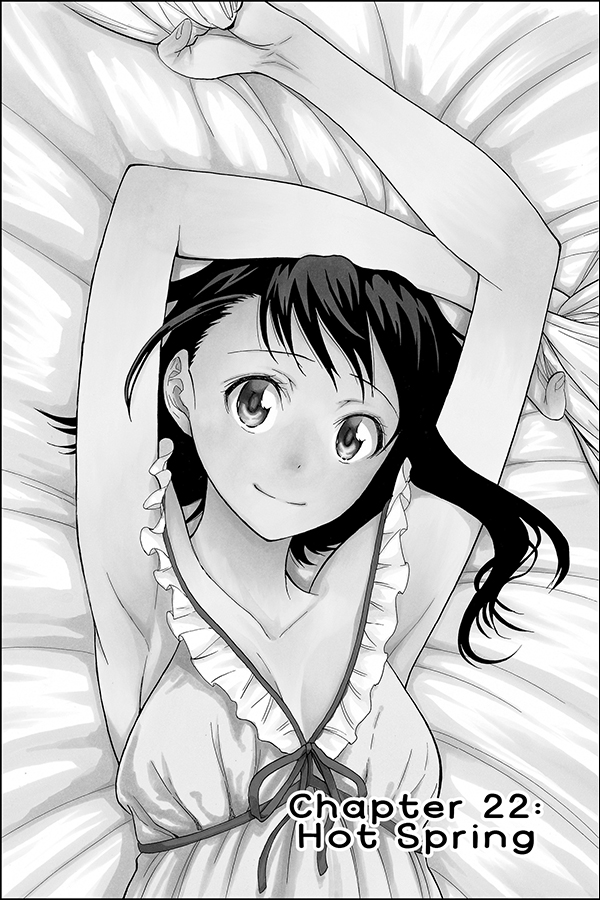 Weekly Shonen Jump: Tell us about your favorite chapter!

Yu Saito: The chapter that Naoshi Komi Sensei and I were most into would have to be in the third volume, around the time they were on their class trip. The chapter called “Hot Spring.”

WSJ: What was that chapter about?

Saito: Raku, Chitoge and Onodera are in the same group on their school trip, and they end up playing Old Maid where the loser has to talk about their first crush. And after that, Raku ends up mistakenly entering the women’s bath.

WSJ: That’s quite a lot for one chapter! [laughs] What makes this chapter your favorite?

Saito: I feel that Komi Sensei’s art and writing were in full display in this chapter. The chapter develops in a predictable manner, with everyone trying to fix problems, but they end up getting themselves deeper and deeper into it. All of the characters’ actions and expressions have motivations behind them. In comedies, I think the characters really fulfill their roles in situations like these.

WSJ: If you read the chapter, you’ll know, but you get to see all kinds of expressions from the characters in this one.

Saito: I believe Komi Sensei established himself as a master at drawing expressions with this chapter. Apparently, the process of actually drawing this was utter hell, however... [laughs] There were lots of characters and panels in this chapter, so I’m glad everything fit well.

WSJ: It’s not as if Old Maid is the most action-packed game in the world, so it seems he concentrated most on the angles and expressions. 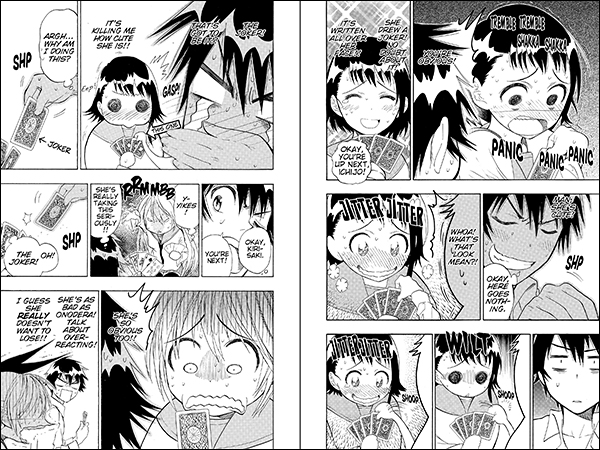 Onodera’s expressions before and after she draws the Joker, as well as Chitoge’s expressions in this chapter, are priceless! —Nisekoi volume 3

Saito: That’s right. Komi Sensei seems to really like the School Trip arc. It was natural to transition from playing Old Maid to heading into the hot springs. After all, you can’t have a romantic comedy without the highly anticipated “Hot Spring” chapter.

WSJ: There aren’t actually many scenes in Nisekoi where the characters take off their clothes. This School Trip arc is probably the closest the series comes to that.

Saito: We’re actually producing this manga with the idea that we’ll stay away from panty and boob shots as much as possible...but, I mean, you have to take off your clothes to go in the hot springs. That’s just how it works. 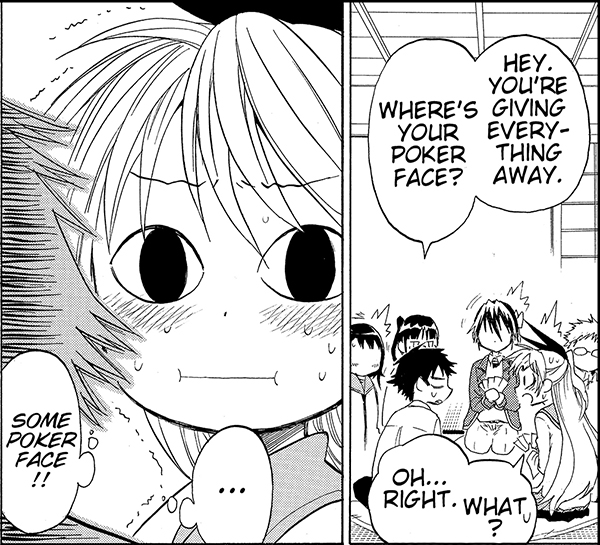 Chitoge’s poker face! You have to wonder if she really understands the meaning of the phrase... —Nisekoi volume 3

Saito: The fact that Komi Sensei can make something funny with just a single expression—this chapter really solidified that as one of his skills for me.

WSJ: Nisekoi is often categorized as a romantic comedy, but even if you take the “love story” aspect out of the equation, you can still enjoy it purely as a comedy.

Saito: I’m talking about his panel layouts—the pacing and composition. For me, I consider having good artistic ability and good manga-writing ability to be two completely different things, whether it’s the use of space, the angles from which he draws the characters or the way he produces it. I’m always impressed with how Komi Sensei manages to draw in the reader. It’s completely different from simply being “good at drawing.”

WSJ: You can be reading along, and then, all of a sudden, a panel catches you off guard. It’s like Komi Sensei has total pacing control.

Saito: That’s why Chitoge’s expression here works so well. Nisekoi actually got started because I recommended to Komi Sensei that he should draw a romantic comedy since the girls he draws are cute. But it’s a strong showcase of his talent that he can show off the characters as cute and also like this.

WSJ: So the series got its start from you, then, Saito-san?

Saito: Komi Sensei’s last series, Double Arts, wrapped up its serialization, and we were having a meeting at a family restaurant when I brought it up. I asked him if he wanted to draw something with romance when Komi Sensei said, “I want to draw a couple that doesn’t get along.” So we started talking about how they had to have a reason for fighting when we came up with the idea of “what if their families were yakuza or gangs?” And the rest is history.

WSJ: People picked up on Komi Sensei’s good art and pacing back when he was working on Double Arts, right?

Saito: Yes, the heroine in Double Arts was a good character, and actually, Komi Sensei’s debut title, island, was the story of two girls. He was good at drawing girls even back then. But once you get into the realm of serialization, romantic comedies often have stories that wrap up in a single chapter, so we’re always throwing ideas back and forth about what to do next at our meetings. [laughs]

WSJ: How do you come up with the story?

Saito: Normally Komi Sensei comes up with the ideas, and I hear him out. Depending on the chapter, both of us might work on developing the ideas, or I’ll suggest something...but Komi Sensei is the one leading things. I was actually the editor in charge of Gin Tama, so I’m putting to use all of the things I learned from working with Sorachi Sensei.

Saito: I don’t think I could work on a manga like Nisekoi with all of its episodic content without the experience I gained working on Gin Tama. I learned a lot as an editor. A lot of Sorachi Sensei rubbed off on me during that time, including his views on making manga.

WSJ: On another note, in Chapter 49, there’s a scene where Chitoge acknowledges her feelings for Raku. Was this development something you were planning from the beginning?

Saito: It sort of just ended up like that. We hadn’t planned it out intentionally. She followed her feelings, and that’s how it ended up. 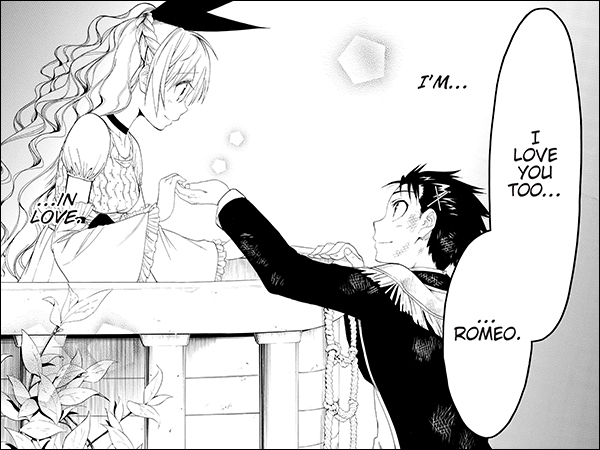 The turning point in Chapter 49! Chitoge admits that her feelings for Raku are no longer fake, but real. —Nisekoi volume 6

Saito: We don’t go against what the characters feel. This development is the result of Komi Sensei’s writing. It’s natural for her to start admitting her feelings here.

WSJ: Saito-san, who is your favorite character?

Saito: Marika—not as the editor, but as a reader. 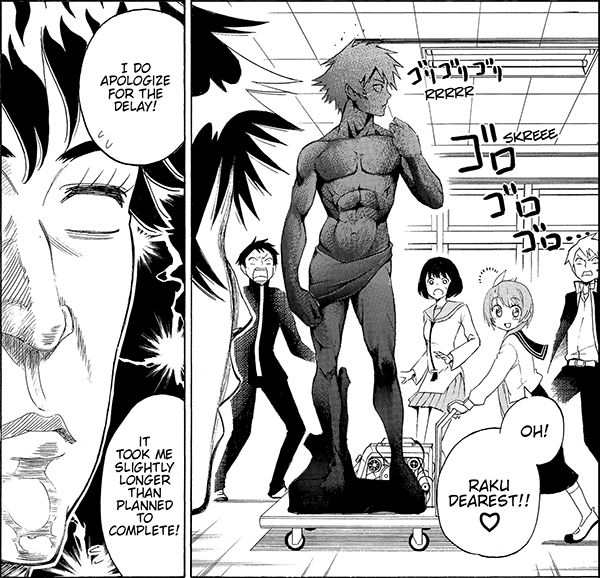 A chocolate carving of Raku for Valentine’s Day on a cart with an engine attached. Seems like she’s already calculated that Raku will run away when he sees this! —Nisekoi volume 8

Saito: Her actions are simple, since all that’s in her head is “Raku Ichijo.” She is always, unwaveringly, doing her best for him, so it’s fun to watch. Girls that try their best are cute.

WSJ: That’s true. There are many scenes that depict her perseverance. 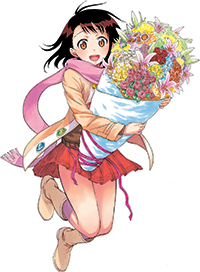 Saito: Yeah, she’s quite popular! Unlike Chitoge, who’s the daughter of a gang leader, Onodera is a pretty normal girl, so it’s easier to relate to her. You want to root for her, you know. Oh, Ruri’s gotten more popular as well. We originally placed her in the manga simply to function as Onodera’s friend, but I’m glad that she’s exceeded our expectations. It’s kind of fun to be in the position of Shu or Ruri. The traditional role of “the meddling friend” in the romantic comedy. I’d like to fulfill that role myself. [laughs]

WSJ: And then there’s that recent chapter centered around Shu’s love life.

Saito: Komi Sensei and I really love that arc.

WSJ: Why is that?

Saito: It can be tough writing a storyline with the main character. When the story centers around Raku’s love life, it can be tough to work around those limits. On the other hand, with Shu—this might not be the best way to phrase it—but it doesn’t matter if he succeeds or fails with his love life. It’s exciting for the creator and editor, and of course for the reader, to see how stories like Shu’s end up, as we don’t know where it will go either. 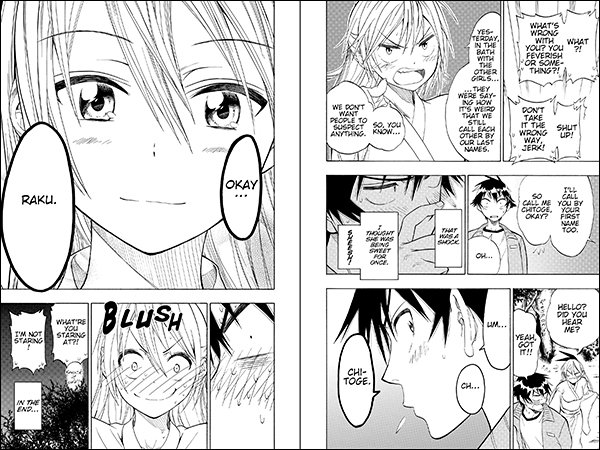 After the “Hot Spring” incident, Raku and Chitoge both call each other by their first names. What kind of conclusion will their bittersweet false love come to? —Nisekoi volume 3

WSJ: Is there a theme to Nisekoi?

Saito: We hope you read this manga and say to yourself, “I wish I could have this kind of school life.”

Saito: There might be cute girls out there like this. You might not stumble upon them in real life, but you still wish that you could meet them—that’s what I hope the readers feel upon reading Nisekoi.

WSJ: Right?! These kinds of romantic comedies are fantasy stories, so you have to pack them full of pubescent dreams like love and wanting to be popular with the girls. You have to feel jealousy when you read it, or else it’s not a true romantic comedy!

WSJ: Sorry, I got a little carried away there. [laughs]

Saito: [laughs] Even Mr. Shinbo, the director of the Nisekoi anime at Shaft, said he wished he could enroll at their school. Thank you!

WSJ: We couldn’t live out our youth like this, right, Saito-san?

Saito: Are you trying to draw out a comment from me about how unpopular I was? Come on!

WSJ: Apologies. [laughs] Well, that’s all. [laughs] Thanks for reading!

And that’s all, folks! Nisekoi print volumes 1–3 are available now! Nisekoi digital volumes 1–7 are also available now at VIZ Manga. Look out for the next edition of Japanese Editor Picks! Which manga will be featured next time? Look forward to it!