SJ Alpha picked the brain behind the international hit manga Bleach—Tite Kubo! Read on to find out what inspires Kubo Sensei and his thought process when creating his characters.

Q: Were there any specific manga you read when you were young that inspired you to become a mangaka (manga creator)?

Tite Kubo (TK): Gegege no Kitaro by Shigeru Mizuki was my earliest influence. It was the first manga whose characters I ever tried to sketch. I really liked his yokai (Japanese folk tale creatures) design, and his art has a unique flavor. My art style is so simple compared to Mizuki Sensei’s work, which is very detailed. But I feel that there is some influence from him in terms of my character design. Even to this day, seeing Mizuki Sensei’s art makes me very excited.

Q: We know you’re really into music. What are some bands you listen to when drawing manga?

TK: David Guetta and The Back Horn are my recent favorites. I don’t usually listen to Japanese music. I like listening to music from artists all over the world. I watch MTV while I’m working on manga. Also, I use a phone app called SoundHound a lot when I’m cruising in the city. It’s perfect for me because I get bored really quickly, but the app helps me discover new music. 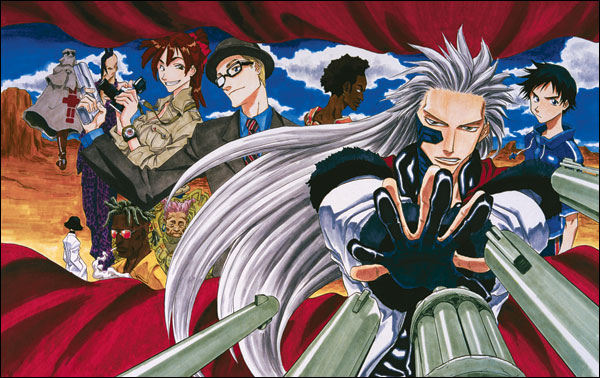 ZombiePowder. Vols. 1–4 are available in print from VIZ Media! Go to store.viz.com!

Q: Did you learn any lessons while drawing your previous manga ZombiePowder. that helped you when you started Bleach?

TK: The most important thing I learned from ZombiePowder. is that I should always follow my heart and draw what I want to draw. When I was working on ZombiePowder., I was still holding back. I wasn’t used to weekly serializations, and I was reacting to my editor’s comments. But now I focus more on staying true to my own style and creating what I want to. 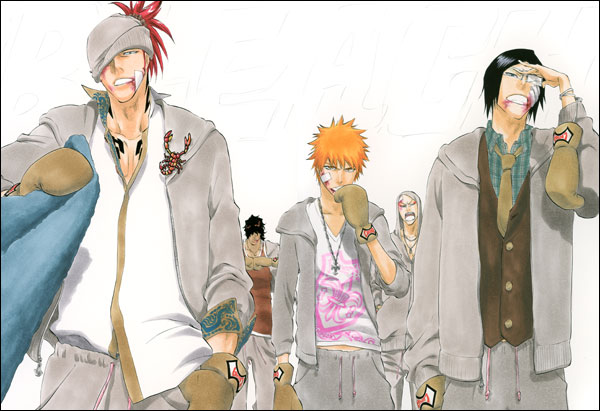 Q: Your character designs are a lot edgier and more stylistic than the average shonen manga. Tell us the process of how you create a character. 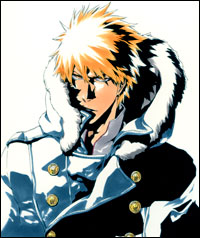 Q: After the massive Arrancar arc finished, can you tell us what you were trying to do with the Lost Agent arc that started in volume 49?

TK: In the story arc, I was trying to reboot and recreate what I have done in Bleach up until now. In Bleach chapter one, Ichigo gained the power of a Soul Reaper. But now that he has lost his power, Ichigo must get it back. It’s like starting all over. The Lost Agent arc is important because it leads into future chapters. (Note: The next story arc, The Final Chapter: Thousand Years Blood War arc recently began.) 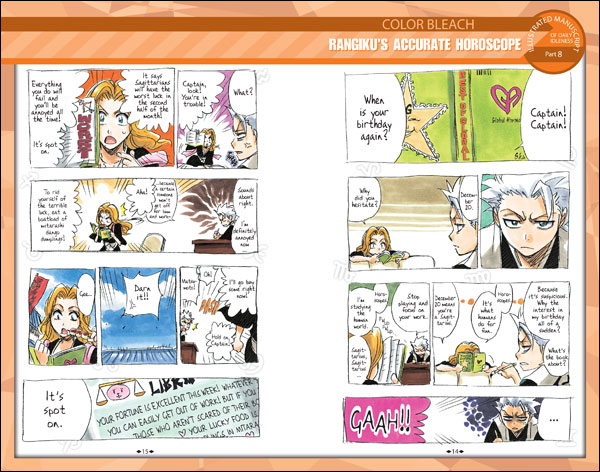 Q: In Color Bleach+: The Official Bootleg (SJ Profiles), you drew very humorous sides of the characters. Which characters do you like to draw as a comic relief?

TK: As I draw manga, I love giving a hard time to Toshiro Hitsugaya. Or if he were still alive, I would do the same thing to Ulquiorra. To me, it’s so funny to see the contrast between the characters’ usual personalities and their interaction in a comedic situation. Hitsugaya is an almighty character in that sense. Even in the regular series, he’s the one who responds to other characters’ silliness. It’s just so much fun to expose the sides of a character’s personality you normally don’t see.

Q: The use of Spanish words in your manga gives it a very unique flair. How do you come up with the terms? Do you speak Spanish or have access to a Spanish speaker to check the terms and names?

TK: When I choose Spanish terms for Bleach, the most important thing is the sound of it. I generally have an idea of what I want to convey. Then I flip through a dictionary and look up a lot of words with similar meanings. Out of those choices, I pick the word that matches the right feeling and that has a good sound to it. I’m sure to the native speakers it might have grammatical problems. But that’s a part of my work and my expression too. 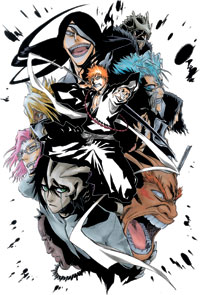 Q. Digital manga, like Weekly Shonen Jump Alpha, is starting to take off in America. What are your thoughts on digital manga?

TK: To be honest I’m not very used to digital comics. I really like books and print media. But I know that for the United States, the country is huge, and there may not be bookstores around where you live. So I can see how useful it could be there.

Q: Your characters have been through a lot in the nearly fifty volumes of manga you’ve drawn. Which character do you think has changed or grown the most, and how?

TK: I feel like Ichigo is definitely the character that has grown the most. Particularly while I’m working on the current story arc, I feel like Bleach is all about Ichigo. He leads the story and takes us into the story. I feel strongly that when Ichigo is having a hard time, I want to cheer him on. When I am having a hard time in real life, Ichigo is the one who cheers me up.

Q: Do you have any last comments to the fans of Bleach in the U.S.?

TK: For those of you who are just getting into reading the new story arc of Bleach, you may notice that the series is going to be a bit different. This new arc will lead you into a whole new kind of story that you haven’t seen before. I hope that you get to experience this difference as you read the manga near-simultaneously with the audience in Japan.