Every great series must come to an end. Now that Bakuman has come to a conclusion, Shonen Jump Alpha got ahold of the phenomenal writer and artist duo for an exclusive interview for the first time in America!

Takeshi Obata is on another level when it comes to drawing. Since his debut, he has been raising the bar of shonen manga art and creating a new standard for the genre. No one else could’ve made a manga about competing manga artists so exciting and visually stunning as Obata.

Q: Tell us how you first became interested in becoming a mangaka (manga artist).

Takeshi Obata (TO): I wanted to become a mangaka because I always liked drawing.

Q: Do you have a manga-creating mentor? Or is there any particular manga that influenced you?

TO: I used to read Cyborg 009 by Shotaro Ishinomori Sensei over and over when I was little.

Q: Tell us about Tsugumi Ohba. How did you become partners with him? Also, do you think he has matured as a writer since Death Note?

TO: It was simply a matter of good timing because we were both looking for a partner when we teamed up. Ohba Sensei is a mysterious guy. I don’t meet him too often, so he is still a big mystery to me. Rather than his growth, I am more amazed by his range of storytelling in going from a dark series like Death Note to a contemporary comedic series like Bakuman.

Q: How did you come up with the character designs for Bakuman? Also, what were you conscious about when designing characters who are mangaka and editors?

TO: Ohba Sensei creates characters who have realistic personalities. When I draw them, I slightly reference real-life people that I’ve seen in this industry and exaggerate their qualities to turn them into manga characters. 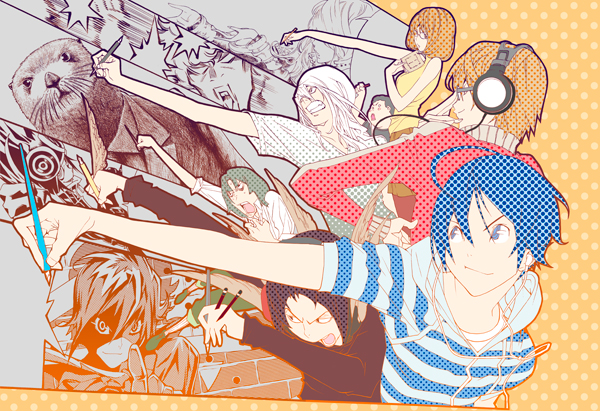 Q: Which mangaka character in Bakuman do you feel is closest to yourself?

TO: Kazuya Hiramaru and Takuro Nakai.

Q: How do you feel about “the manga about manga” being successful overseas like in America?

TO: I don’t know how readers overseas feel when they see how Weekly Shonen Jump is created based on the readers’ surveys. But other than that, I think how the main characters want to be the best
at what they do is a feeling that anyone from anywhere can understand. 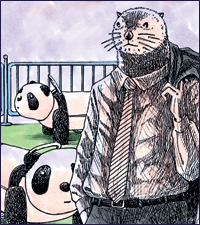 Q: In Bakuman, there are a lot of manga series within the manga. How do you make the look and feel of each series different?

TO: I usually struggle getting the styles down for each series. But for the series that have completely different styles like Otter No.11, we try to find a different artist with an appropriate art style. To be honest though, Otter No.11 is the series that I would love to draw myself.

Q: Do you have any advice to people who want to become a mangaka?

TO: Just keep drawing no matter what.

Q: What makes you happy about being a mangaka?

TO: Those moments when I get to draw what I was imagining, or when I execute a manga well. 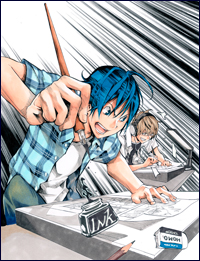 TO: The whole time I was working on Bakuman, I felt like I was drawing about my everyday life, so I don’t feel too much of a sense of accomplishment even now that we've completed the series. [laughs] But drawing characters who learn how to make manga one step at a time gave me a fresh outlook on my own job, and it will influence my work in the future.

Q: Last but not least, what message do you want the readers to take away after reading Bakuman?

TO: The message in Bakuman is not only significant for the manga industry, but it can apply to anything else you do in life. Regardless of what industry you are in, we all have to work very hard.