Stylizing the cast of characters from Rainbow Rowell's bestselling novel Fangirl was no easy feat, but Gabi Nam embraced the challenge, skillfully illustrating each character's distinctive characteristics. Rainbow Rowell and Gabi Nam give us a bit of insight into the design process below. 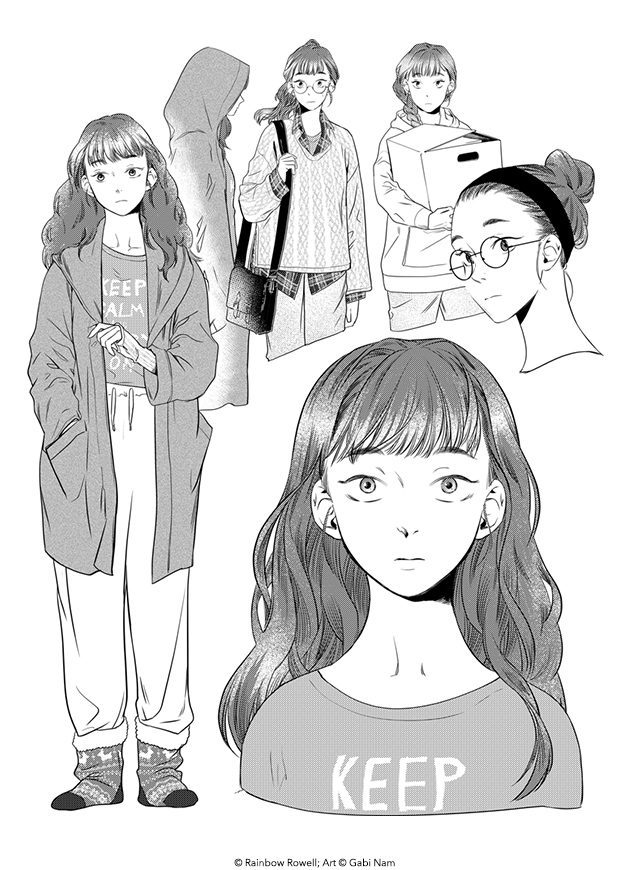 Rainbow: Something I realized during this process: In the novel, we learn less about Cath’s appearance than anyone else’s – because we see the world through her eyes, and she’s not that interested in herself! I love how Gabi captured Cath’s personality in her look. The layers of sweaters. The timid posture. The way Cath is always wide-eyed, taking everything in. In the manga, we get to see Cath very quietly having all these big emotions. It’s really amazing how Gabi pulls that off.

Gabi: Cath is a thoughtful and independent character, but from a subjective point of view, she appears ordinary. I feel she is someone who is self-aware, who can observe her inner thoughts and reveal them carefully? Since she prefers to focus internally, it seems that she doesn't have much interest in shaping her appearance so I thought her hairstyle should be as easy to maintain as possible. Also I wanted to dress her comfortably without being sloppy. Somehow, most of her clothes are my clothes because I like those kinds of outfits too. She has an easy-wear style, like hair bands and cardigans but I tried to make it look a little more comfortable and warm. (And I also love sweaters, leggings and leg warmers!) 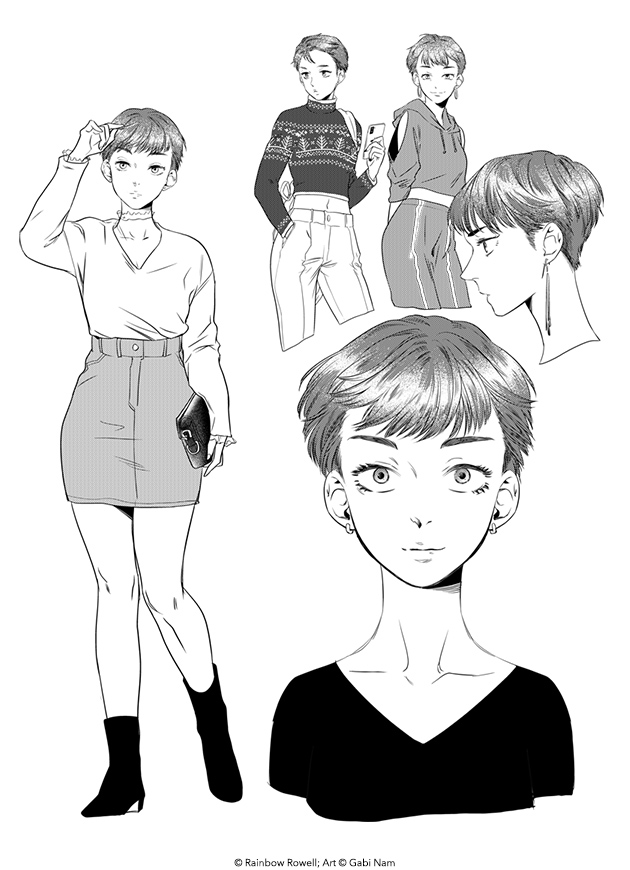 Rainbow: It’s so cool to me that Cath and Wren look just alike, but also not at all alike. You see that throughout the manga, in the way they carry themselves and move, how different they are. It’s a small thing, but I wanted Cath and Wren to be pear-shaped and hippy, because that’s something that we do know about them. It’s something Cath doesn’t like about herself. I wanted us to see that they are pear-shaped and also lovely.

Gabi: Wren is a bit more outgoing than Cath. She is not afraid of change and is ready to face the world. However, she is also very pure when she’s being sincere. She might be a pointed blade facing the new world, but on the other hand, she can be a shield for her sister. I also wanted to highlight this dynamic in the character designs. I thought she would be a little more outgoing than Cath, however I wanted to show that she still had innocence. She wears tight outfits that reveal the body line and wears cute accessories. Perhaps it resembles the style of roommate Courtney, but she can own her style. 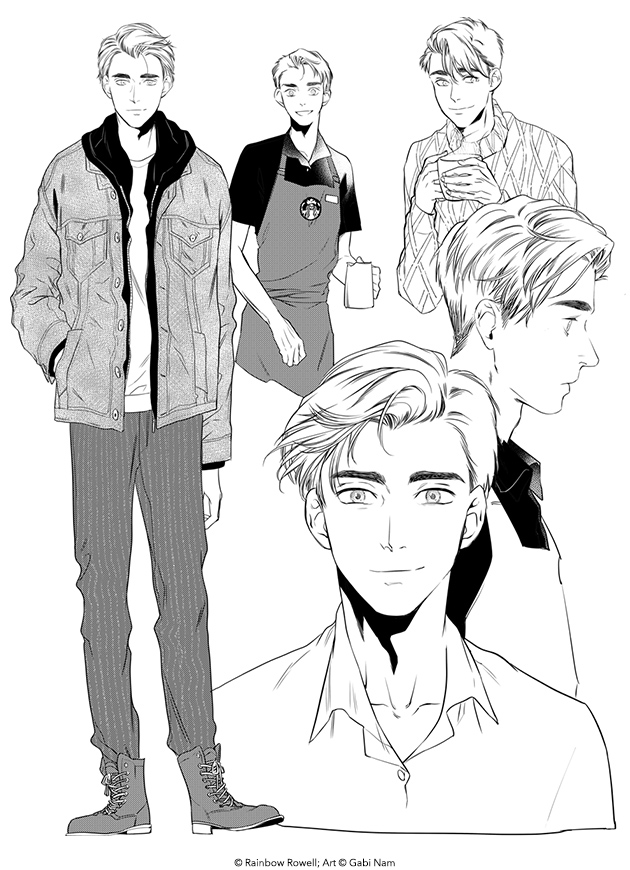 Rainbow: As we were talking about these designs, we really got down to the nitty-gritty for each character. For Levi, the nitty-gritty is HAIR. That floppy, messy hair. The hairline that’s just starting to recede… Gabi is especially great at movement. The characters just flow through the pages. And Levi moves so much like himself. He leans. He saunters. He flops. (I know I’ve already used the word “flop,” but wait ‘til you see this guy flop.)

Gabi: I thought of him like the sun. He has purity that penetrates the essence. I thought he was a very free and unrestricted person. He has a very attractive face, and is a person who is sometimes warm, and sometimes passionate. Although his outfits may appear basic, and he prefers comfortable clothes like a farm boy, his tall height and body shape make him even more handsome. 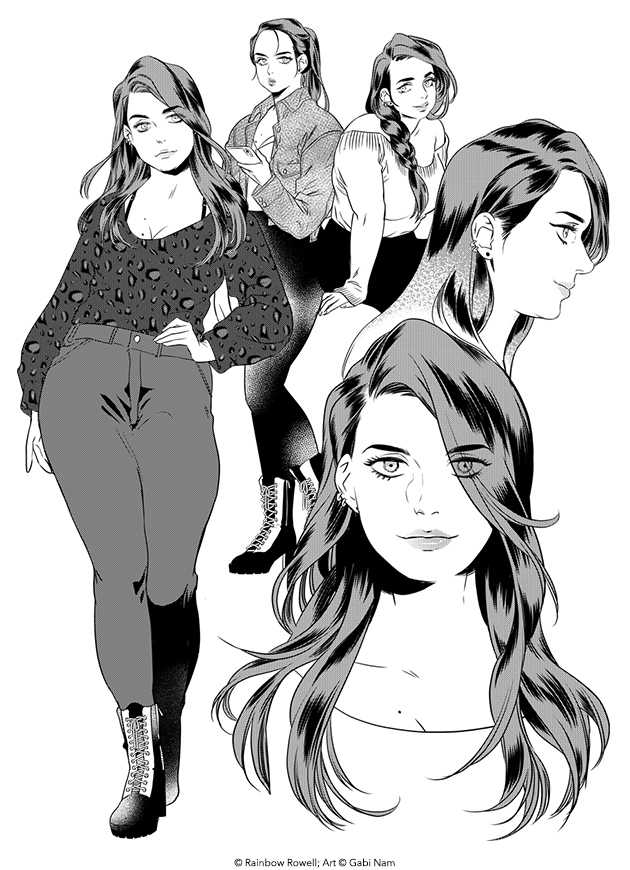 Rainbow: I’ve written a lot of plus-sized characters, and I think they can be challenging for artists because, well, what does “plus-sized” really mean? How do you translate a word like “bigger” into a character design? And how do you do it in manga, where bodies and faces are often so stylized? It was important to me that Reagan be both bigger than the other characters and more obviously glamorous and confident. And I think Gabi really nailed it. Her Reagan is such a knockout – and so funny! The way Gabi draws Reagan makes all of Reagan’s jokes land better.

Gabi: She was the most difficult to design. Since I didn’t have experience drawing plus-sized characters before, I studied more diverse body types and fashions. She is a very enterprising and – most independent person and not worried about how others will see herself. And her attitude towards life is very simple and sometimes exciting. She felt very attractive to me. To keep her image working well throughout the manga, I sketched various looks for Reagan. 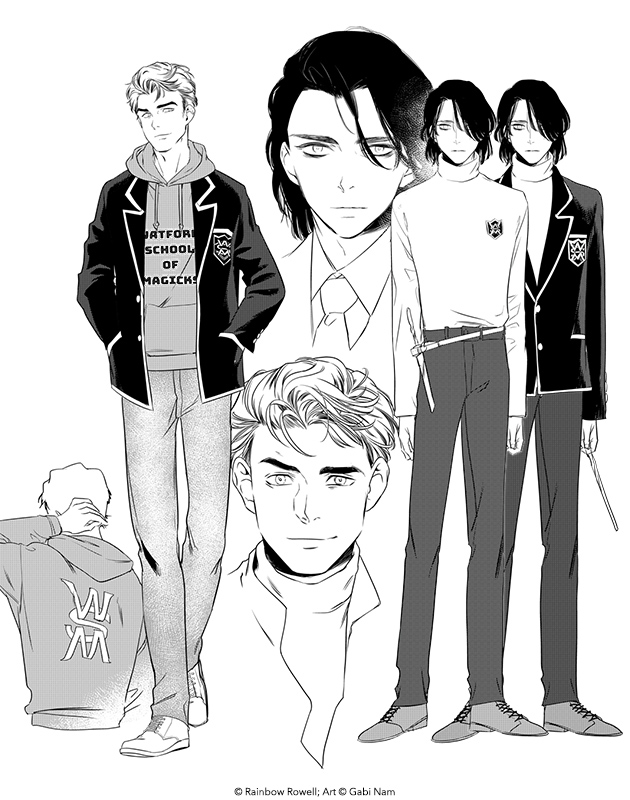 When I think of Simon and Baz in Fangirl, I think of very tropey, archetypal characters. The Hero. The Villain. I love how melancholy Gabi’s Baz is. I want to give him a hug, and then, while I’m hugging him, laugh behind his back at how ridiculous he is.

I wasn’t expecting Gabi to design a new logo for Watford, but it’s brilliant! I’ve already seen it show up in fan art.

Gabi: Simon – I imagined a lion at first. A very confident person with a handsome face whose expressions are very diverse, there’s no hesitation in showing those feelings on the face. He has a strong energy and has the power to reassure others. I thought his energy was like a strong magnet that leads his relationships, or like a very sturdy river with strong currents. Because of his carefree nature, he probably doesn’t prefer the stuffy student uniform, but he will wear it with some rebellious touches so that he is comfortable.

Baz – “Pale” and “bloom”, those are the words I initially thought. I imagine he is more suited to the image of Carry On than the Canon style. He looks a little more innocent, but not fragile. His nature may be in conflict, but he covers it with the rigidity in his appearance. Even as he wears a very neat and classic school uniform, he nevertheless radiates a beautiful ambience.