Check out this Q&A with Rainbow Rowell, Sam Maggs and Gabi Nam, the creative team behind the manga adaptation of Rainbow's New York Times-bestselling novel Fangirl.

Q: Were you familiar with manga before this? How do you feel about your first manga?

Rainbow Rowell: I was both very familiar and still new to it. I have two kids, and manga is their reading material of choice. So my house is stacked with manga. But I had only read maybe four or five different series, usually when my older son brought me something he really loved. 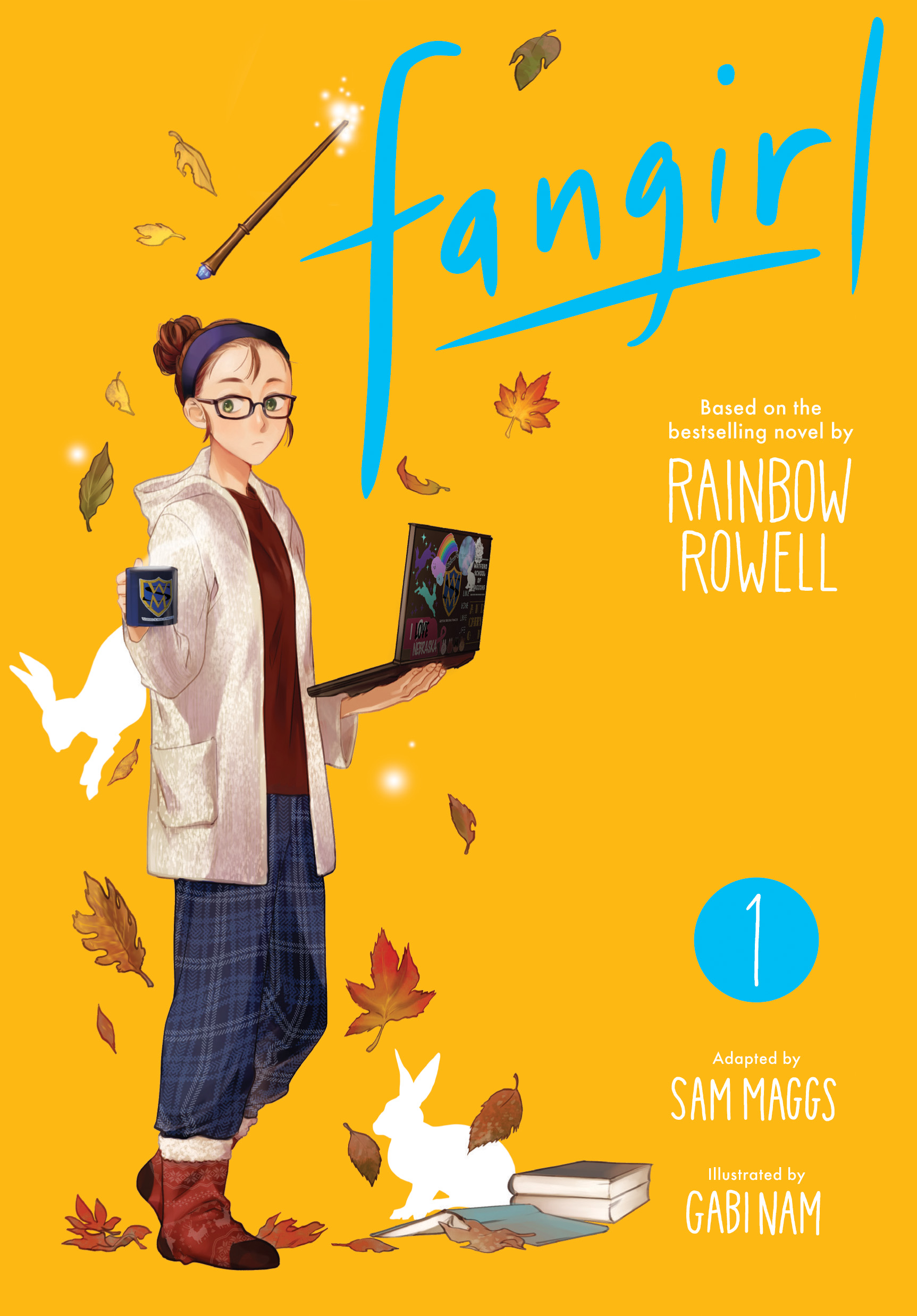 Q: Which character were you most excited to see in their new manga glory?

Rainbow Rowell: That’s such a hard question. The Fangirl artist, Gabi Nam, is extremely talented, and her style is so distinct – I wanted to see her take on the whole world. But I think I was probably most excited to see Levi. He has a special place in my heart, and I couldn’t wait to see how Gabi drew not just his look but his physicality, the way he feels comfortable everywhere he goes. There are a couple of panels that left me speechless. He’s all lanky and floppy. I was like, “THAT’S SO LEVI!

Q: We’ve gotten a glimpse of Simon and Baz from Kevin Wada—who illustrates the covers for your Simon Snow novels—what do you think of the manga rendition of the pair?

Rainbow Rowell: Oh man, I’m so lucky to work with Kevin. His Simon and Baz feel alive. And I’ve also gotten to see so much fantastic fan art of Simon and Baz over the years…

I think she nailed it! Simon and Baz look like themselves, but still totally new. I’m especially fond of Gabi’s Baz. He’s so tortured and goth, and his perfect turtleneck—it kills me.

Q: You’re no stranger to comics; can you share with us some differences between working on a manga adaptation of your work and working on western comics?

Rainbow Rowell: This experience was different largely because another writer—the very talented Sam Maggs—was doing the major work of adapting. I was there to edit, and to write new scenes and dialogue where we needed it. But Sam did all the heaviest lifting.

But there is a difference between this and Runaways, the Marvel comic I write, or Pumpkinheads, the graphic novel I did with Faith Erin Hicks.

Manga storytelling often feels lighter to me. Not in content or seriousness. But in rhythm. Like, if it were a song, it would feel lighter. I feel like there’s more motion in manga; you get pulled more quickly through the pages. And I feel like the emotions are brought forward. That was the hardest thing for me to adjust to—the way you get to see the characters laughing or crying, and it represents their inner feelings, not their realistic behavior.

Q: How different was it writing for a manga opposed to writing for comics and video games?

Sam Maggs: Incredibly different! But that’s what makes working in different mediums so much fun; you get to learn a new skillset each time. Though I grew up reading shōjo like Sailor Moon and Fruits Basket, I also read a ton of VIZ manga in preparation for the adaptation; I particularly enjoyed My Love Story!!, Hana-Kimi and Otomen.

Q: What was it like working with Rainbow Rowell on a new script for Fangirl?

Sam Maggs: It was great! Rainbow, Gabi Nam, and the whole team at VIZ were all wonderful collaborators. One of the most exciting things about the manga is that Rainbow wrote all-new scenes between Baz and Simon for the project, so even if you’ve read the Fangirl novel there will be surprises in here for you.

Q: Working with multiple creators on the project, is working in opposing time zones difficult?

Sam Maggs: That’s sort of the new normal for everyone these days, I suppose! But we made it work without issue. There were a bunch of phone calls and passing drafts back and forth, but ultimately I think we collaborated well and got the book to a place everyone is thrilled about!

Q: How do you approach adapting prose into scenes for manga?

Sam Maggs: I try to play the book out like a movie in my head, and then use that vision almost like a storyboard for breaking out the scenes for the manga. The great thing about this being a manga and not a western-style comic is that the art and the characters have so much more space to breathe; there’s a lot of room for introspection and character development, which is my favorite part of any story! So I had a lot of fun taking all those Fangirl scenes out of my head as I saw them and scripting them for the manga page.

Q: We’ve seen a few of your early rough sketches of Cath and Levi. How many character drafts did you go through to get the finalized versions?

Gabi Nam: In order to be close to the character descriptions by Rainbow, it took about three rounds of development. The image of the character came to mind reading the book, but in the process of designing, Cath and Reagan's body line and Levi's hairstyle were examined and corrected to fit more accurately.

Q: You’ve shared style sketches of the main characters, are there any other character quirks you had to draw out to create full-fledged characters for the manga?

Gabi Nam: I thought a lot about what style to apply, considering their personality as much as possible. A lot of research was needed to show the character's fashion. Cath has a warm and cozy style, Wren has a bold but cute style, Levi has a comfortable and freely active style, and Reagan has a confident style that allows you to see her personality as it is. Courtney seems like the type to have very cute style clothes, so it reflects a lot of fashion seen in Korean internet shopping malls, and Nick is a hipster style mixed with a little dandy, so I researched a lot of male fashion.

Q: Which character gave you the most trouble?

Gabi Nam: No character was particularly problematic. In the process of drawing the characters, I discovered more of their charms, and it was fun to think about how to highlight them. Just one thing is... Cath's hair? It took a little time because I had to color the hair of the twin, Wren, along with Cath. Usually, in manga, the main character's hair color is black or white for easier work.

Gabi Nam: My favorite scene is by far the dance scene! Being able to draw Cath's free movements made me feel free too! The most difficult scenes are still most of background work. It was difficult to recreate real places I haven't visited, so I visited some neighborhoods with Google maps. (haha)