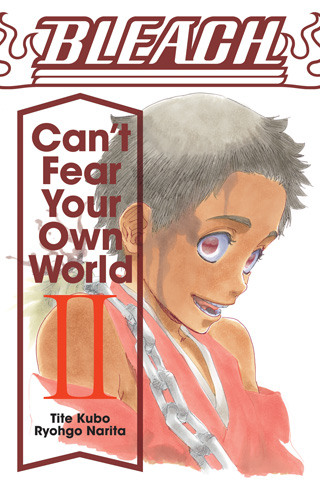 Hikone Ubuginu’s mysterious origin story, and the secrets behind the very existence of the Soul Reapers and all their allies and adversaries, could be revealed to incite an all-out battle royal. Meanwhile, Urahara and Hisagi face down formidable enemies in Karakura Town as Tokinada Tsunayashiro’s fiendish plan unfolds!

Here is a sneak peak from the new Bleach novel, available now.

WHO WAS THE “SOUL KING”?

Before the Soul Society was created by his magnificence, what did the world look like?

It was a question that had come to the minds of many of those living in the Soul Society at least once. Even residents of the Rukongai, who did not have the word Soul King in their vocabulary, wondered what kind of person ruled over the Soul Society. Excepting those who had to put their every effort into simply surviving day to day, most had probably wondered what great presence ruled over the Soul Society and the world of the living. Along with their surprise that an afterworld actually existed, many of those who came to live in the Rukongai from the world of the living were curious to know who ruled over the Soul Reapers, who proclaimed themselves to be “gods of death.” Yet they, much less the Soul Reaper “gods” themselves, for the most part had no idea what the “Soul King” was. In practice, most accepted the Soul King as a nebulous symbol of the world and an absolute presence.