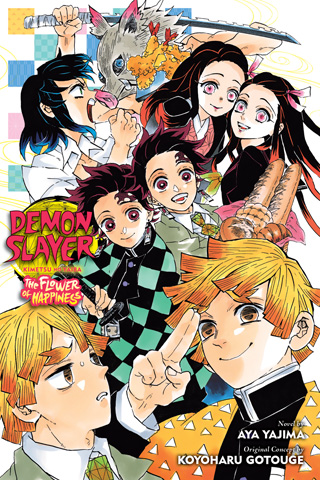 A mystical flower offers a prosperous future for its bearer. Determined to find the flower for Nezuko, Tanjiro makes a harrowing journey up a mountain—but Inosuke reveals the flower’s true worth. In other tales, Zenitsu recalls the day he battled a demon to save a crying girl, a fortune-teller warns Zenitsu that he’ll die if a girl falls for him, Kanao helps Aoi learn her value apart from killing demons, and when Kimetsu Academy students search for the recipe to win over Mr. Tomioka, Mr. Rengoku ropes them into cooking!

The crisp black kimono with long sleeves and beautiful patterns would illuminate his little sister’s pale skin; the gorgeous golden-orchid obi belt might have made her, a natural worrier, frown and say it was too extravagant. Would she shed tears beneath her ebony hair tied up with ornaments in the elaborate bunkin-shimada style? Tears not of sadness, but of great joy.

My little sister, kinder than anyone in this world. A girl who hasn’t lost the warmth she had as a person, even now, as a demon. I pray I can make you happy, the happiest girl in the world.

“A celebration?” he asked.

“Yes,” Hisa said, and her eyes, already narrow as threads, narrowed even further with her broad smile. “Happily, one of the village’s girls is to wed.”

A family crest adorned with a wisteria flower was proof that the household would spare no effort in the service of the Demon Slayer Corps, all free of charge. Members of such families never forgot their debt to members of this corps for saving them, and so they repaid them for their services. Thus, Demon Slayers injured in the line of duty sought out families with the wisteria crest.

Hisa’s was just one such home.

That day marked ten days since Tanjiro, Zenitsu, Inosuke, and Nezuko had arrived at the house to rest and heal after a difficult fight. The demon Nezuko slept in a box of Kirikumo Cedar during the day, and the people of the household generally only had contact with the three boys. Thanks to meals bursting with all the mountain’s bounty, fluffy futons, soft kimono, and heartfelt hospitality, the three of them and their broken ribs were recovering quite happily.

“She’ll be leaving us for the home of a prominent man in the town closest to our village,” Hisa told them.

“That is definitely worth a celebration. Congratulations to her,” Tanjiro said from the bottom of his heart.

Hisa grinned and continued. “If you don’t mind, I’d love it if you Demon Slayers were to celebrate with us.”