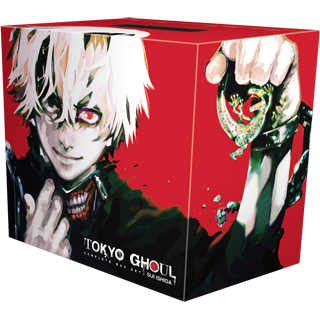 Something sinister lurks in the shadows of modern day Tokyo. People walk into the night, never to be seen again…

Meet Ken Kaneki, a timid college student with a penchant for reading. And prepare to go on a dark and gritty ride as you witness the horrific events that befall him as we delve into a different Tokyo than we know—one that harbors the monsters called Ghouls.

Visually, Ghouls are identical to humans, making it easy for them to blend in with regular people. Like a wolf wearing sheep's skin, they preyed on human lives for years, savoring every bite with glee. But lately, these elusive beings have been forced into hiding, adapting human behavior in order to survive. They could be anywhere…and anyone...

A lesson Ken Kaneki learns the hard way. He’s a nerdy bookworm and not exactly popular with the opposite sex. So when Rize Kameshiro, a local beauty and Kaneki’s crush, invites him on a date, he happily says yes. That fateful night, a freak accident stops Kaneki from dying at the hands of a powerful Ghoul—only to wake up and find he is no longer completely human. This is where our story begins.

The first thrust of the story focuses on Ken Kaneki and his tortured existence as a half-Ghoul. We've all seen or read the story of someone becoming a monster before, but mangaka Sui Ishida does a superb job of making the reader feel what the protagonist does. From Kaneki's sudden realization that all food tastes horrid to him to his even more shocking discovery that the smell of a bloody corpse is practically irresistible. It's done so well you as a reader are right there with him. Sometimes, unconformably so. 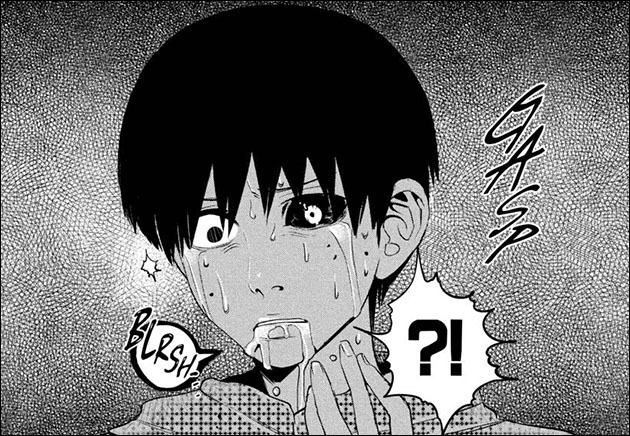 As the series continues, the focus changes to the ongoing hatred between different factions. Whether it be Ghouls against humans, humans against Ghouls, or even Ghouls against Ghouls, there is a vicious cycle of violence going on. As loved ones fall victim to vengeance, it becomes hard to tell who the monsters really are. And that’s the brilliance of the series, the morally gray actions of all the characters make it hard to differentiate between the good guys and the bad guys. One thing is for sure—if you think character development is an important factor in great manga, then this is a series for you.

Friends become foes, and foes become allies as the story twists and turns. There are so many interesting and unusual dynamics between characters, even side characters, that it’s hard to pass them off as unimportant. I've grown attached to almost every character and appreciate their differences in both attitude and design. Ishida Sensei develops them with such depth that their struggles not only shape them but also strengthen them. 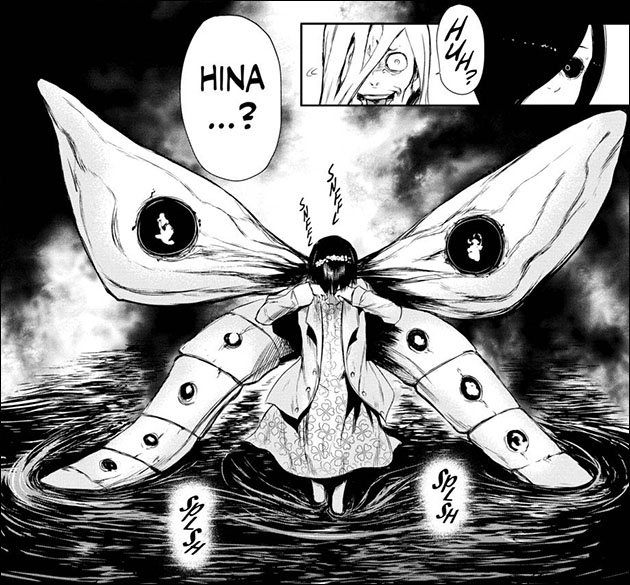 Hidden agendas, well-kept secrets, mysteries and more--this is a series jam-packed with intrigue. It is a gritty supernatural page-turner, and the ending will surely haunt you for a long while. From characters to story pacing, it would be hard to find a more balanced series. The in-depth characters with various motives add that much more to a fascinating plot rife with existentialist flavors and inner conflicts. 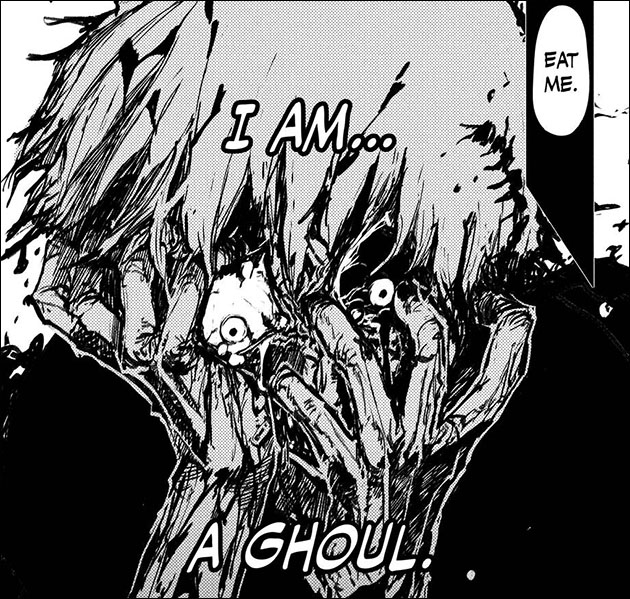 And now, like a hungry Ghoul consuming a fresh human corpse, you can consume the entire series with the Tokyo Ghoul Complete Box Set! Along with all fourteen volumes, the beautifully illustrated case also comes with an exclusive two-sided poster featuring our protagonist Ken Kaneki and Touka Kirishima. 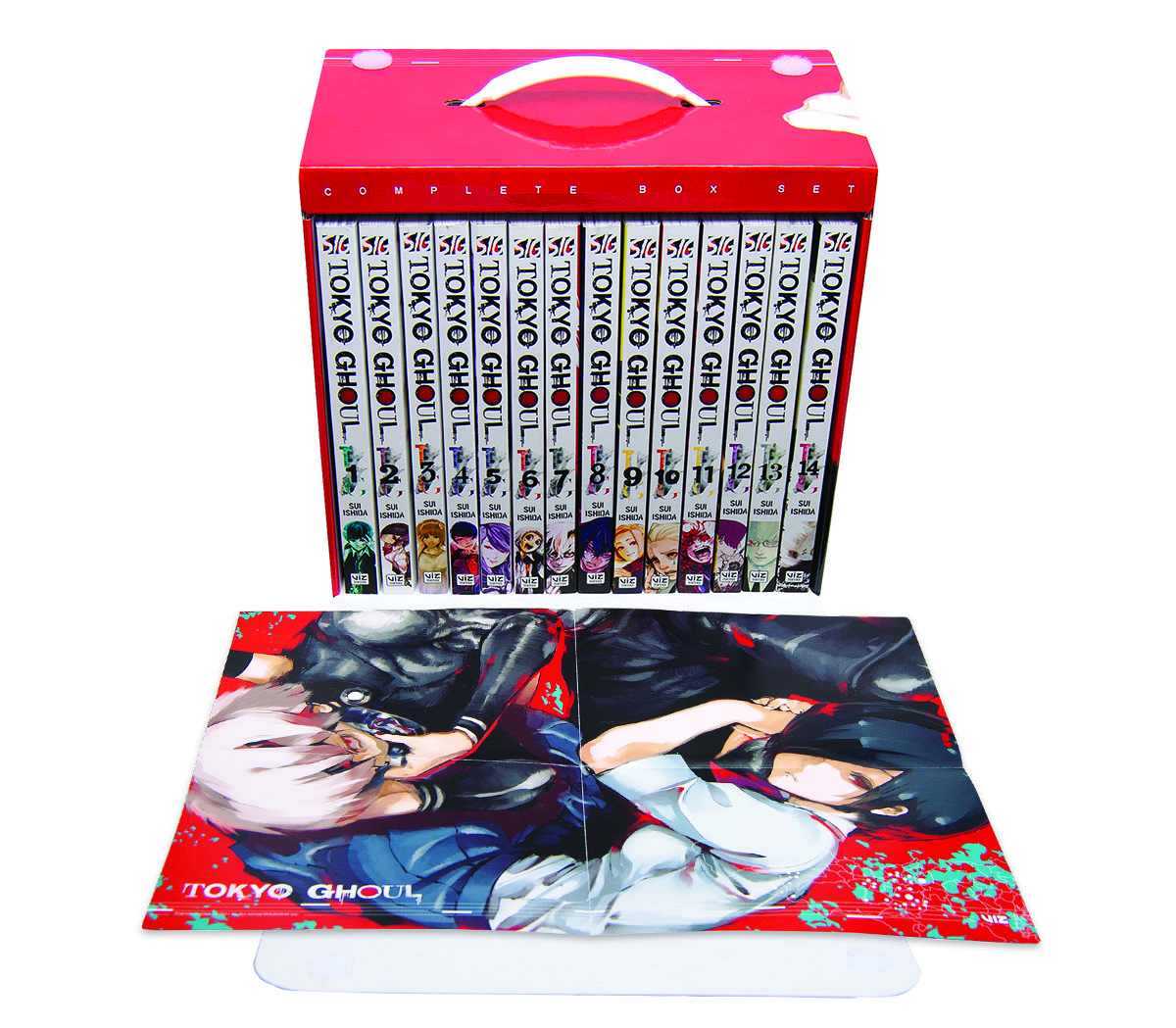 Need a bite first? You can check out a preview of the first volume right here!