As the Soul Society’s secrets are brought to light in the mysterious figure of Hikone Ubuginu, the full terror of Tokinada Tsunayashiro’s plan is revealed. Shuhei Hisagi must grasp the true ability of his zanpaku-to and the meaning of its name. Can a single blade sever the consequences of death? 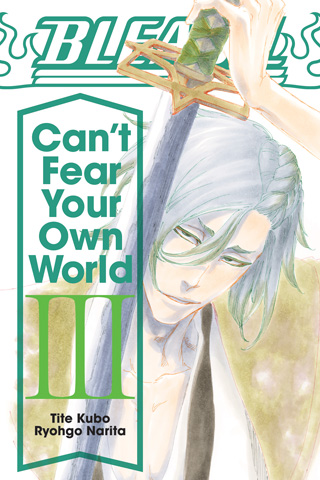 Here is a sneak peek from the final novel, Bleach: Can’t Fear Your Own World, Vol. 3.

Hikone Ubuginu did not remember the moment that their sense of self germinated.

That didn’t quite mean that they had no memories of their time as an infant, in the way that an ordinary Soul Reaper and human would not. The konpaku called Hikone was a warped form created by layering and interleaving the splinters of many different beings. Inside their konpaku were Hollows from millennia ago, freshy dead Quincies, and even miscarriages collected from the world of the living. The konpaku was a compilation of every possible kind of soul with the Fragments of the Reio at its center. Normally, a being such as Hikone would promptly fall apart and lose form. However, because they contained the Fragments of the Reio that the Tsunayashiro family had gathered, Hikone was miraculously able to continue life as a konpaku with a single sense of individuality.

Though Hikone clearly remembered the moment when they had been given the name Hikone and their consciousness had awakened, they were seized by the fantasy that they had a sense of self that reached much further into the past than that.

Or perhaps that was not a fantasy.