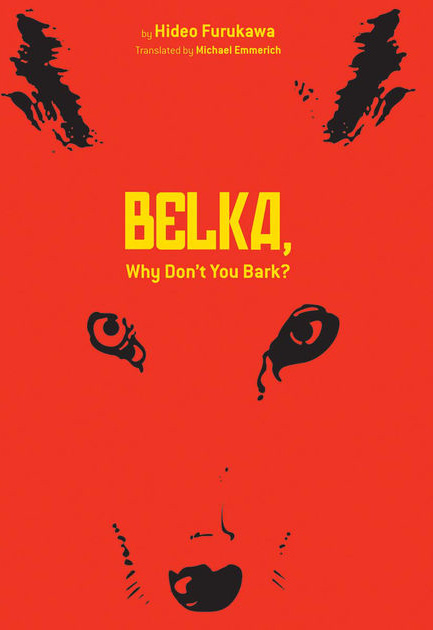 Belka, Why Don't You Bark?

Belka, Why Don’t You Bark? begins in 1943, when Japanese troops retreat from the Aleutian island of Kiska, leaving four military dogs behind. One of them dies in isolation, and the others are taken under the protection of U.S. troops. Meanwhile, in the USSR, a KGB military dog handler kidnaps the daughter of a Japanese yakuza. Named after the Russian astronaut dog Strelka, the girl develops a psychic connection with canines. A multi-generational epic as seen through the eyes of man’s best friend, the dogs who are used as mere tools for the benefit of humankind gradually discover their true selves, and learn something about us.

Belka, Why Don't You Bark? - Excerpt

The snow had let up, but the temperature remained below zero. The road was hemmed in on each side by a forest of white birches. The young man trudged onward, bundled from head to toe against the cold, snow crunching underfoot. He had been walking an hour already. Then, at last, he saw a house. A cabin—made of logs, rough-hewn. Clearly inhabited. The smoking chimney proved that.

The place looked as if it belonged to a hunter. The man noted the four skis propped against the wall. Two inhabitants, maybe? Or was one pair an extra? You’d think there’d be a guard dog, but there wasn’t. Instead, the owner himself pushed the door open, stepped outdoors. Must have heard the footsteps in the snow. Realized he had an unanticipated visitor. He was old. An old man. His expression softened in response to the young man’s greeting. “What are you doing way out here?” he said. “So deep in the hills, this time of year, in this no man’s land? There is not a dacha for miles. Lost your way?”

“Does the road lead to a village?” the young man asked.

The old man nodded. “It does, but it is a five-hour walk.”

“The back wheels of our car got stuck in a stream,” the young man said.

“We couldn’t push the car out, so I left my friend and came on alone to ask for help in the village.”

The young man thanked him and stepped inside. The temperature was easily seventy degrees. Which made it at least seventy degrees warmer than outside. The young man removed his mink shapka, his heavy gloves, his coat. He scanned the room, not even trying to conceal his curiosity. Just inside the door was a hunting knife, a hatchet. Farther back in the room was a rifle. A shelf lined with bottles of vodka, a globe. A map of the world on the wall. It was old, though. The Soviet Union carpeted the Eurasian supercontinent. Tacked up around the map, several family photographs, portraits of the old “founding fathers.” It’s been ages, the young man mused, since I
last saw that profile of Vladimir Lenin.

“Never seen how a hunter lives, I take it? Here, take a chair.”

“I was just getting some lunch together,” the old man said. “I have stewed venison. Will you join me?”

“That would be great, thank you.”

“It is too quiet out here,” the old man said. “You have made my day, turning up like this. It is a delight to host you.”

“Never liked hunting with others. Not my style.”

“No hunting dogs either?”

The young man observed his host across the table. It was hard to gauge his exact age. He was in his sixties, maybe seventies. His hair and beard were white. The young man could tell what color it had been. It had never been black. This old man had been blond in his youth. His features were pure Slav.

The young man was Central Asian.

“Have another glass.” The old man poured more vodka.

A woodpecker called outside.

The young man kept looking around. “You shot this deer yourself?” he asked. He kept talking, scanning the room. Beside the table was a shelf crammed with jars of pickles and preserved foods. Mushrooms, cucumbers. The old man was complaining about his pension. The whole system would be bankrupt soon, he said. His tone was calm, measured; these financial issues didn’t appear to be causing him any real trouble. “Worked my whole life in the Ministry of Railroads, you know. Who would think times would get so bad?” he said. “They were always screwing with us.”

There was a radio by the wall.

“You get your news from that?” the young man asked.

“Yes, though I try not to run the batteries down,” the old man said with a chuckle. “Still, I know what is happening in the world. Even here in the woods, miles from anywhere.”

“Do you really?” the young man said.

“You know what? I have fish too—let me get some. Smoked salmon, how could I have forgotten. Getting old, I guess, not offering you anything with your vodka.” The old man tossed back a glass and stood up. He wandered off toward the cooking area.

The young man rose too. “Please don’t bother,” he said. Please come back to the table. Please. Too many dangerous things over there. That rifle, the axe.

His right hand held an Austrian pistol with a polymer frame.

The old man froze in his tracks.

“Hands up,” the young man ordered. “Turn around.”

The old man did as the young man said. His face betrayed no hint of fear; he hadn’t even paled. Though he wasn’t smiling either.

The young man walked over. He grinned.

And then something happened. The young man was no amateur. He had kept his distance, taking care not to get too close. He had held his elbow out to one side, kept the pistol trained on the old man. He hadn’t let down his guard, he was still in his safety zone. Or so he thought. But then, all of a sudden, he couldn’t see. He was stunned. What’s happening?! He smelled alcohol. Vodka. He spat vodka at me. He had it in his mouth.

The young man pulled the trigger.

But by then his knee was broken. His left kneecap had been kicked, bashed in, his leg snapped backward. He felt his body crumbling. One second his right leg was there, perfectly straight, the next it too had been kicked out from under him. His body hung in midair for a split second, then crashed to the floor. A motion so clean it was beautiful. Zero gravity. Then his weight returned. He felt the old man bring his heel down on his spine, then kick his skull. The other foot ground into his palm. The pistol was gone, kicked away.

He felt a pressure on his back.

He felt something knobby slam against his spinal cord.

He couldn’t move. There was an arm around his neck, his head spun.

And there was a crack. A crack, however, that he didn’t hear.

The young man was dead.

“Sheesh,” the old man sighed, hoisting himself off the body he was straddling, clambering to his feet. “So you found this hideaway. Finally caught the scent,” he crooned. “You have some nose.”

But what do you know about real dogs?

The old man crossed the room. Went over to a shelf on the wall where the map of the world was hung, the family pictures, the “founding fathers.” He took the globe in his arms.

“Impostors. You do not know shit about real dogs,” he said. “Never will.”

Suddenly the globe was split in two, top and bottom. He lifted the metal lid from its base. A skull sat inside it. An animal skull. The skull of a medium-sized dog. It was charred, but here and there patches of skin remained. The interior of the globe had been fitted out with protective supports and foam.

The globe was a case. The old man gazed tenderly at the skull.

He said he had a friend back in the car. Guess I need to take care of him too.

“It is true, I admit it,” he announced, evidently to the dog’s skull. “I have lost my mind. I want to set them loose. More than anything. All the old powers, before I die. Before my…before our old world disappears forever.”

Is that not right, my darling?

You, you great Soviet hero, the greatest dog ever to live, the only one who deserves this globe.

By then the old man was no longer talking aloud.

Already it had begun.