Incoming transmission from Cherami Leigh, the voice behind NieR:Automata’s A2. She’s reading an excerpt from the new novel NieR:Automata: Short Story Long, based on the hit game. Glory to mankind.

She had had the dream many times. She fought with her comrades, heard her comrades scream… and she cried. She had it so often that she was aware it was a dream even while watching it.

But she hadn’t expected to be called when she woke up. That was the only thing that was unusual.

“YoRHa model A2 was rebooted 5 minutes and 42 seconds ago. Cause: Damage from an encounter with a large Machine.” 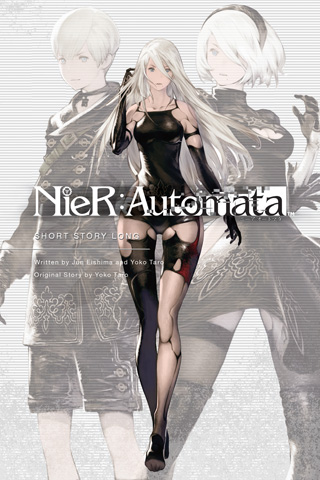 The monotone voice from the floating box. Now she remembered. She engaged a large hostile in the desert, was exposed to an EMP attack, and lost consciousness right as the battle ended. She brushed sand off her and stood up.

“Shit! All this sand is annoying!”

“Report: Your fuel filter is damaged. It seems that particulates infiltrated your filter during battle. Recommendation: Swift replacement of the aforementioned part.”

The box was always saying absurd things. She couldn’t see how it was supposed to be a “support assistant”.

“Records indicate that a filtration unit was recently active at the Resistance camp.”

She stared at the box in surprise. She hadn’t misheard. It had definitely just said what she thought it said.

She knew that Anemone was alive. She had recently been told that information. Until then, she thought she had been the only survivor.

That day, after frantically escaping Mount Ka’ala, she removed the bomb in her. She threw away anything that seemed like it could contain location-sensing hardware and left behind almost all her equipment issued by Command. She wandered Earth with just her long sword in hand. Destroy as many Machines as possible. That was the only thing on her mind.

She had died during that battle. Her old self was buried under the rubble with her comrades.

That’s why even if she knew Anemone was alive, she didn’t go out of her way to contact her. She didn’t know what to do if she met her. But now she had a perfect excuse, in the form of a fuel filter, to go talk to her.

She peered toward the direction the box specified. She could see some high-rise structures beyond the sandstorms.

She walked, kicking sand as she went. She called out her comrades’ names in her head. But she felt nothing.

She was empty inside.