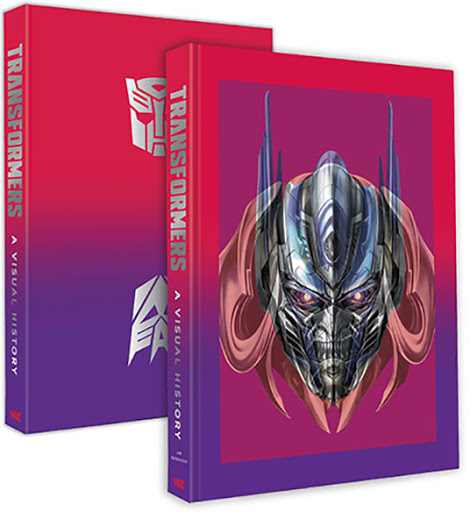 Transformers: A Visual History, written by Jim Sorenson, is a four hundred and eight page monster of an art book. It's beautiful and dense, with an incredible collection of new, rare, unseen, and just plain cool artwork. I had the pleasure of editing the book, and a big part of those duties was being the "keeper of the archive."

Hasbro was kind enough to open their vaults to us and delivered gigabytes on gigabytes of data for us to sift through and select images from. Selecting images was a lengthy process, because we wanted to strike a balance between the unseen and the iconic, the familiar and the novel. We knew we would find some cool images, but what struck me most during the process was how viewing the wide swath of Transformers artwork affected me personally.

I'm an '80s baby, so it's no surprise that I was into Transformers as a kid. I didn't know about the comics until I was much older, but the cartoon and toys were more than enough to capture my imagination. Transformers was around at a point where I was figuring out everything I liked as a kid, so its influence is subtle, but wide-ranging. I never had an Optimus Prime toy, but seeing him on the show and imagining playing with him helped foster my boyhood love of semi-trucks the same way that Starscream and Jetfire helped me fall in love with fighter jets. Still later, the arrival of Beast Wars a couple years after the debut of Jurassic Park cemented my interest in computer graphics and dinosaurs. Everywhere I look, there's a connection to Transformers somewhere.

That subtle influence makes it easy to forget just how influential Transformers was to me personally, and the world more generally. How many other franchises have had such a fertile run? Cartoons, comics, movies, and—of course!—toys came out year after year, decade after decade, like clockwork. The franchise has been reinvented, revitalized, and reimagined in so many directions that there's genuinely something for everyone, whether you love the classic old G1 designs or if the recent run of comics from IDW Publishing are your faves.

In putting together Transformers: A Visual History, Jim, Viz Editorial Director Sarah Fairhall, and I sat down and checked out over 4,700 images from every corner of Transformers history; from the humble beginnings all the way up to the bombastic films. Hasbro, IDW, and many artists and studios were kind enough to send us material to use, and as a result, we ended up with enough to fill a dozen books. Imagine it on your bookshelves: "The Encyclopedia Cybertronica." But we needed to fill 408 pages, not 4,000, so we had to be selective about what made it into Transformers: A Visual History.

Jim provided a great deal of expertise and context for the book. The man is a font of Transformers lore, and the image selection process was greatly aided by him providing context for images we may not have understood. We wanted to make sure all the coolest Transformers images made it in, and that meant making sure that Transformers history was properly represented, as well. Jim wrote essays to open each chapter and commentary in the smaller sections that deliver that to a T. I had a great time asking him questions about Transformers history that I'd missed or forgotten since I was a kid, and realizing just how deep the franchise gets.

Transformers: A Visual History is 408 pages of everything you've come to love about the Transformers and so much more. We've got rare art, killer writing, some curios from history, and some classic images presented with all of the high production values they deserve. It has everything from cartoons to movies, Commodore 64 games to PlayStation, and touches on the very beginnings of the series all the way up through some extremely charming material from the hit film Bumblebee. I hope you like it.

Get your copy of Transformers: A Visual History by Jim Sorenson today.