As with most serialized stories, Naruto as a franchise is ever-evolving. True, there’s always another dangerous magical beast, genocidal wackadoo or exotic weapon of mass-destruction that needs a Rasengan-to-the-face, but the who, how, and why are never the same, and are we left with a triumphant victory, heartwarming comfort or bittersweet relief? Case-in-point, our Blu-ray collection-de-jour is the Naruto Shippuden The Movie - Rasengan Collection, featuring the first four movies of the franchise post time-skip. And while quality may vary, each speaks to the current place in the timeline in which it was made. From tone to aesthetics, from Sakura-focus to Hinata-focus, from Rasengan to…

Okay, so it’s always the Rasengan. Some things may change, but why mess with perfection? It’s probably why the discs look like literal Rasengan orbs.

This first film is my favorite Naruto movie. It starts out starting strong with gorgeous fight sequences between Naruto and a gigantic, multi-headed creature…which then impales him to death!

Kidding! Mostly! That fight was a vision of the future from the local psychic priestess Shion whose job description consists of A) learning a re-sealing technique to banish the ancient genocidal demon, Moryo, (in case someone’s ever stupid enough to release him) and B) having visions of her life being in peril and ending with someone she loves dying in her place... And you thought your job was rough!

Also involved in this complicated plot is Yomi, a dark Medical Jutsu user turned would-be world conqueror who’s got it into his head that the afore-mentioned eldritch monstrosity Moryo would make a perfect clean energy source for his “unstoppable” army of stone soldiers. Yet even after he successfully unseals Moryo’s soul, he must still recover its body, which is sealed elsewhere. It’s now a race against time as Shion must re-seal Moryo’s consciousness before it can resurrect completely. And who other than Team 7 should find themselves commission to be her bodyguards and escorts? 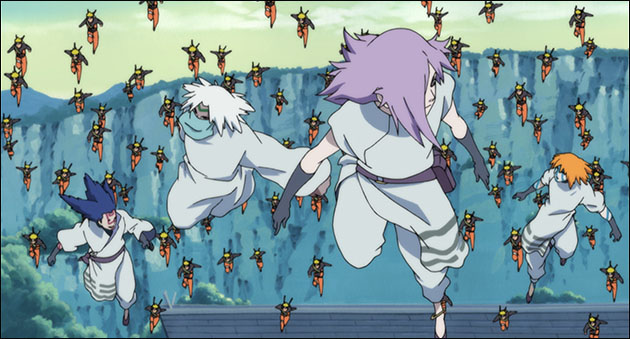 This movie has a lot going on, what with the ancient demon, the mad doctor, the stone army and the assassins that Yomi dispatches to “take care” of Shion, yet the animation team keeps both the story coherent and the viewer engaged. For example, the stone army is a fantastic usage of CGI in an otherwise hand-drawn setting. They look like unnatural monsters powered by evil. The assassins are also fun to watch due to their unique skill of implanting temporary chakra into their bodies to switch up their abilities. It’s a gleeful pretext to have some gigantic fights that don’t all conform to the typical restrictions.

Shion herself surprised me by being her own person with an engaging character arc, rather merely a pretty face with a tragic backstory. For instance, she starts off with a “spoiled brat” attitude (standard fare), but later we see that she’s just trying to distance herself from people fated to die in her service. That's understandable. Before long, she reads like a more fatalistic Naruto—a lost teenager both valued exclusively for and hated exclusively because of her powers whose loved ones have all died protecting her.

Visually, I’d say this movie’s the prettiest, with The Lost Tower as a close second. The combat’s great too—I’m guessing that the animators prioritized showing off their skill, what with this being their first Shippuden movie. There’s this pervasive sense of epic scale that the other three movies just don’t capture as well.

This movie got a lot of attention pre-release for bringing Sasuke back into the story—he’s right there in the opening as Orochimaru dispatches him to retrieve the help of a skilled medical Jutsu user, Shinno. As it happens, Shinno is visiting the Hidden Leaf just in time for a bunch of flying ninja from the Land of Sky to bomb the place. (It’s vengeance for Hidden Leaf’s unfinished purge on their land during the Second Ninja War. Sins of our fathers, etc.)

Naruto befriends both Shinno and his young protégé Amaru, during the blitz’s aftermath and agrees to escort them to their own village as it has probably suffered a similar fate and therefore needs the help of a master healer. Yet there’s more to come as not only do the Sky Ninja cover their tracks, they must also contend with the Zero-Tailed Beast: a slug-like monster which feeds on hatred and pain. 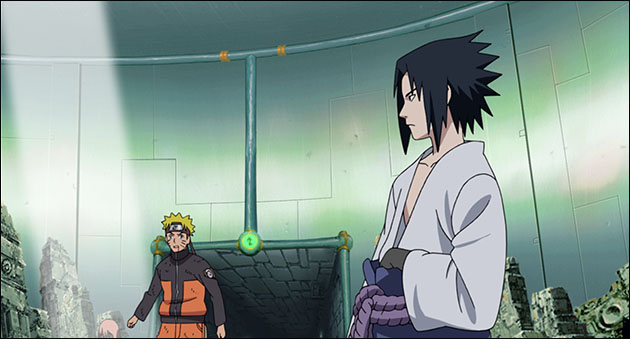 As with the last movie, you have a lot of villains vying for the “main villain” role. Which makes the movie a good watch because it's fun to see who's the baddest baddie of them all. I do wish we got to spend a little more time developing these threats and giving them characterization. Although Amaru is a fun sidekick that gives Naruto a personal stake in the devastation that follows. It’s a fun watch, though, and there are lots of tense battles and beautiful locales.

The Will of Fire

Then, in a complete turn-around from Bonds, Will of Fire eschews the overly-complex plots and cartoonish villains in favor of focusing on a single conflict. Kakashi’s decides to sacrifice himself to thwart a rogue Hidden Leaf exile named Hiruko, who possesses the power to absorb and steal Ninjitsu. Hiruko’s out to turn himself into a ninja deity by absorbing the Kekkei Genkai of various villages’ ninja and has proven himself impervious to all opposition. Realizing he’s the final ingredient for Hiruko’s immortality smoothie, Kakashi reasons that he should make himself into a human bomb (Trojan Horse-style) and thereby kill Hiruko when he's at his weakest.

Yet while no one’s comfortable with this, only Naruto—who remembers Kakashi’s lesson about protecting his friends even in the face of conflicting instructions—refuses outright to accept this choice. As such, while Hiruko does bring along his own bodyguard posse, the movie wastes VERY little time treating them as a threat and most of the movie’s battles are between Naruto and his fellow Hidden Leaf Ninja. 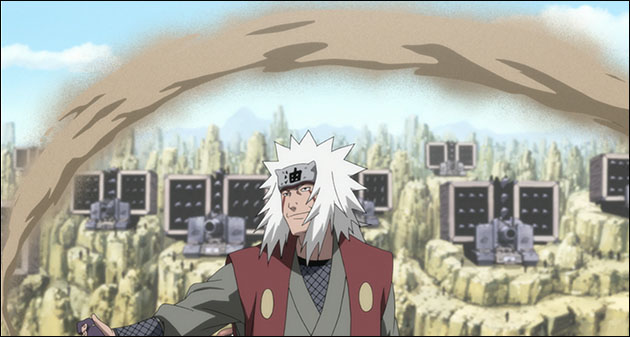 This time it’s the lack of plot complexity that hinders Will of Fire, as most of the movie is just Naruto’s beating his former allies into submission and running after Kakashi. That said, I’ll admit that those beat-downs are epic and that the final battle is gorgeous. Hiruko himself even serves to prove how abandoning one’s friends—on or off the battlefield—can leave you lost and confused, confirming with his life-choices that Naruto’s refusal to give up on Kakashi was the right decision. Plot-wise, it's very straightforward, but a fun watch nonetheless.

The final Rasengan Collection movie is The Lost Tower, and here more than anywhere else is where the more poignant elements of Shippuden kick in. Set chronologically just after Jiraiya’s death, this film’s conflict centers around a puppeteering villain, Mukade, who unwittingly sends himself and Naruto a few decades into the past when unsealing an ancient stream of near-infinite chakra. Naruto awakens to find that the ruins containing the seal have become a city of a thousand towers and that Mukade is the young queen Sara’s Royal Advisor. (He even has the big hat and goatee!) Naruto also encounters a special group from the Hidden Leaf led by a very…familiar-looking older blonde ninja. Trapped in an unfamiliar time, Naruto must find some way to stop Mukade while protecting the city, its people and its queen from destruction.

There’s a powerful theme of loss in this movie’s tone and scenery, including how Loran’s gothic towers resemble both Western cathedral steeples and Japanese grave markers—symbols of death and mourning. Queen Sara may likewise be the new female sidekick-with-a-crush, but her relationship with Naruto centers on how they’ve both lost someone they love: his mentor Jiraiya, her mother the former queen. Mukade’s use of both puppets and saccharine lies serves to symbolize Sara’s desire to escape from reality; she’d rather pretend to have a faithful advisor and a thriving city than acknowledge either Mukade’s manipulations or her own powerlessness. Likewise, the usage of time travel and the emphasis on keeping the timeline intact underlines how neither Naruto or Sara can change the past and must, therefore, accept that the dead will remain dead.

...maybe I’m analyzing this one too deeply. 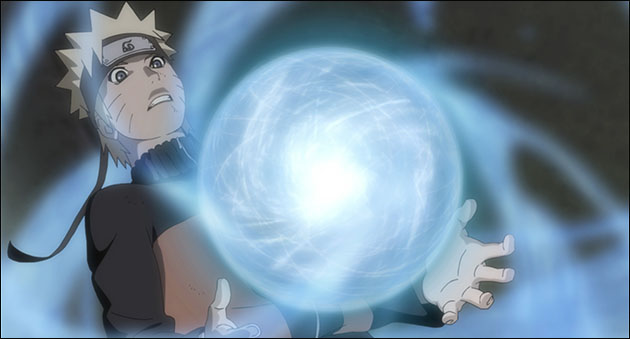 Like all the movies, these visuals are AMAZING. The city, Loran, is a gorgeous place, and the fights that happen there play with the location well. (No mountains, forests, deserts or caves in this movie!) It’s not the most complex of the Naruto plotlines and the villain is your standard take-over-the-world type, but that’s okay. This is a main character-driven storyline, and The Lost Tower delivers all this with minimal fuss.

A large part of this collection’s appeal is how each movie maps to a different place in the Naruto storyline, character-and-tone-wise. Naruto Shippuden: The Movie is an idealist romp with epic fights against a literal demon and whose central conflict is about defying so-called destiny. Contrast this with The Lost Tower where the conflict is all about dealing with a harsh reality and moving on from your losses, painful as they may be, with the villain not even really being the point. Bonds lends us a Sasuke who hasn’t found out about Itachi’s true purposes yet; he’s on the “bad side” but hasn’t gone full-on-Uchiha-style-bonkers. And in Will of Fire, Hiruko similarly reflects the series’ later trend of giving villains motives more complicated than “power” or “immortality” (even though Hiruko wants both of those things too).

Naruto’s storyline is ever-evolving, with a plot and thesis that developed over fifteen years and grew organically. In addition to being fun experiences, each of these movies encapsulate a different part of the storyline. So sit back and enjoy these snippets of Naruto’s various epic epochs—you won’t be disappointed!

You can pick up all four Naruto Shippuden movies for the price on one, right here!