Taiyo Fujii’s Orbital Cloud is hard science-fiction at its best — human ingenuity and international cooperation deployed to save lives and explore space. Award-winning author Ken Liu says, “This book will thrill and delight readers with its tight plotting and brilliant scientific speculation, and it describes the space enthusiast community with a level of authenticity and passion seldom seen in fiction. One of the best hard SF novels of the year.” Fujii himself is a space enthusiast, and a big believer in a vision of a positive future which inspires all his work. He took some time to answer a few questions for us to celebrate the English-language publication of the Seiun Award-winning Orbital Cloud. 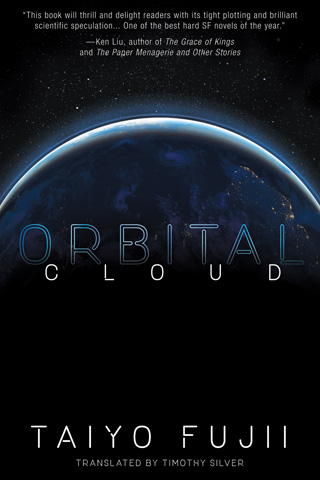 1. Orbital Cloud is a story about space fans making an amazing discovery. Are you a space fan or a stargazer? What attracts you to the skies?

I’m big fan of space. Basically I’m a fan of space development and cosmology. The inspiration for Orbital Cloud was the International Space Apps Challenge, which is held by NASA annually, all over the world, including the International Space Station. I organized the “Our Sphere” team to develop views of satellite orbits in 3D in a web browser. And I got to interact with hundreds of space fans from all over the world. I decided to write a novel about them and about the friend who invited me to that hackathon. He is a Japanese space fan and is developing GoogleSatTrack — a satellite tracker for Google Maps. I saw the early development of the project and saw GoogleSatTrack being used in NASA projects. “Whoa! GoogleSatTrack is on the screens of the Space Shuttle control center!” I thought. My friend Isana Kashiwai is the model for my protagonist, Kazumi. He made a small web-app to feel close to outer space, published it, and made many space fans happy.

2. Orbital Cloud is "positive" science fiction. Why do you write positive SF today, when dystopia and crisis are so popular and in-demand?

Because science has made us happy. I live in the best world ever: less violence, less poverty, and I have a son who would not have survived childbirth had he been born in the 1970s. I don’t doubt that we are going to make the world of the future better than it is today.

Many great science-fiction works used to dramatize the downside of science via the “Sorcerer’s Apprentice” theory. Some scientist or engineer happened to harness too much power without enough care. With that type of story, a dystopian setting works.

Usually in such stories, the “magic” going out of control is due to the protagonist being too young, too poor, or simply not caring enough. But in reality, this doesn’t happen. Problems do occur, even with engineers on the job. And many accidents and potential problems are stopped before they become critical thanks to engineers and scientists working hard to solve the issues. Why do they struggle to improve the world? Because they despair for the world? No. Real heroes want the future to be better than the past.

That is my reason. I’ll set my novels in as positive a future as I can.

3. What are your dreams for international space programs in the future? Which projects would you like to see get off the drawing boards and into outer space?

First, let me see the space elevator. Perhaps as an actual engineering project it won’t work, but I'd love to see plans made. I’m going to write a novel set in the counterweight on the other end of the elevator’s tether. In that story, humanity will be contacted by another intelligence.

Settling Mars is second. I hope my son will be able to go to Mars.

Oh and realistically, I really want to see JAXA’s space tether project get going. Their past papers about electrodynamic tethers inspired me to write Orbital Cloud’s space tether. While I was writing, a JAXA person came to me and asked me to tell him the secret of Orbital Cloud’s tether; I disclosed the concept to him, and he smiled.