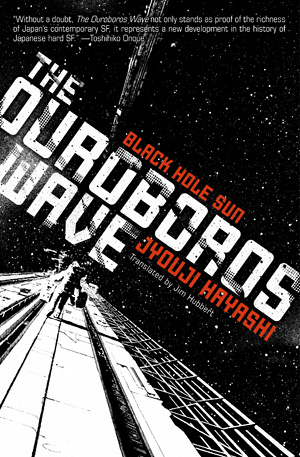 Ninety years from now, a satellite detects a nearby black hole scientists dub Kali for the Hindu goddess of destruction. As human society expands to Mars and beyond, the generations-long project to harness the power of the black hole pits the retrograde humans of Earth against the imminently rational men and women of the Artificial Accretion Disk Development association. While conflicts simmer, a mystery within Kali itself tests the limits of intelligence--both that of human and machine.

If you like The Ouroboros Wave, VIZ Editors recommend:

Catherine took a few moments to frame a reply. “Here’s the problem. I’ll exaggerate a bit to make the point. Have you ever seen Grünewald’s Crucifixion?”

Catherine downloaded an image of the centuries-old painting to her web. It showed Christ on the cross, limbs twisted in a grotesque posture of agony. “What does this make you think of?”

“Well, he has nails through his palms. Must be painful. That’s about it.”

“Right. That’s your theory of mind. As a human, you experience pain. You have memories of pain. You can create an image of Christ in your mind. You have the same physical structure, you assume Christ feels pain. So let me ask you: why don’t you assume that the cross is suffering? The same nails that go through Christ’s flesh are penetrating the cross.”

“But the cross doesn’t feel any pain.”

“Really? Have you ever been a cross?”

“Not personally, no.” Tatsuya grinned.

“That’s my point. The cross and the human body have different structures. Maybe the cross does suffer. We have different structures, so we can’t model its suffering mentally. ‘Thirsty’ equals ‘something to drink’—that’s knowledge a digital inference engine has no way of learning. It has to be programmed; it doesn’t know. That’s why a theory of mind is so important. AIs don’t have that ability yet.

“AIs use language to reach conclusions, but that doesn’t mean they can learn from any form of human reasoning that can be expressed in language. They can’t access the meaning behind the words. Even if AIs can reason, they still need humans to translate phenomena into words or symbols. Otherwise, as far as the AI is concerned, those phenomena just don’t exist.

“It’s not just that the universe humans and AIs understand is different. The universe we perceive is different. Sati and Shiva were populated by their developers with different sets of axioms. Whatever looks like a logical contradiction to Sati will be the key to the accident. What we have to do is analyze that contradiction. Only humans can find internal contradictions in the axioms that a unique AI has built up using rules of logic.”

“Cath, shouldn’t we just start with what Graham actually did? He must’ve modified Shiva for a reason. Then he noticed something wrong. That’s got to be the key.”

“Good point. Graham was trying to upgrade the resonance-damping system. Oscillations could snap the ring if they grew strong enough. He once told me the current safeguards aren’t perfect.”

“I wouldn’t say it’s major right now. But the data we’re getting isn’t what the model would predict. There are these little discrepancies for which we cannot account. Whatever Graham was doing with Shiva, there’s probably a connection. Just before the incident he must’ve noticed something problematic about the changes he made. Whatever it was, I think the problem must be connected to why Shiva reacted the way he did. Still, linking cause and effect isn’t something we humans can do in this case. We need to get Sati on line as soon as possible.”