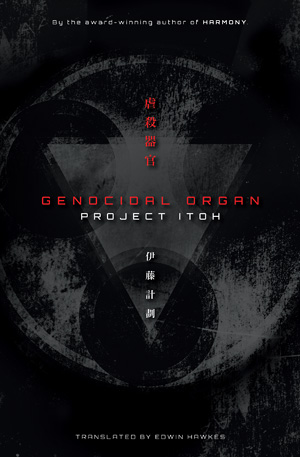 The war on terror exploded, literally, the day Sarajevo was destroyed by a homemade nuclear device. The leading democracies transformed into total surveillance states, and the developing world has drowned under a wave of genocides. The mysterious American John Paul seems to be behind the collapse of the world system, and it’s up to intelligence agent Clavis Shepherd to track John Paul across the wreckage of civilizations and to find the true heart of darkness—a genocidal organ.

"You're not my target," I said. "But if you make a noise or move, I'll kill you. Understand?" I was lying, of course, and I can't say I was particularly proud of the fact that I was lying to a man who was about to die. That I was about to kill, even. But this wasn't the time to be worrying about the finer points of battlefield ethics. "It's the American we're looking for. The man you were supposed to meet today."

"I didn't know he was American," the defense minister said, his breath remarkably steady considering the position he was in, with the deadly blade pricking his throat. "He's our press secretary. Was. Not is."

"So you killed him?" I asked, pressing the point of the blade further against his throat.

"No. He just suddenly up and left for no apparent reason. A few days ago, this was. I wanted to know the details. That's why we planned to rendezvous here today. I was expecting to meet him in person, but he just left a message for me."

Shit. That meant that Target B wouldn't be appearing tonight. Well, we'd still be able to accomplish our first priority and eliminate the former brigadier general, so the mission wouldn't be a complete washout, not by any means. Still, it was a loose end, and that always left a bad taste in my mouth.

"What did the message say?" I asked.

"It was a short note on official government stationery. 'My work here is done.' That's all it said," the ex-brigadier general said.

"Official government stationery my ass. What ‘official government’? What ‘government’ at all? You're just a bunch of armed thugs fighting over scraps of land and wreaking genocide on your own people. Scum of the earth, that's what you are."

"Genocide, you say?" he said. "Is that what you call our peacekeeping efforts? Our government needs to subdue the terrorist threat for the good of our own people."

"As I said, it's not a government," I argued back. "Call yourself defense minister or whatever you like, but it doesn't change the fact that you're not recognized by the United Nations, and more to the point you're the ones going around killing your own people.”

"What has the UN got to do with anything? You imperialists are the ones who came here, trampling our indigenous culture to the ground, laughing at our efforts at self-determination, stirring up racial discord where our people have lived peacefully side by side for years…" At this point the former brigadier general seemed to run out of steam, and he abruptly stopped talking. His eyes were glinting with a peculiar emotion, not quite fear, not quite sorrow. Silence pressed down, punctuated only by the distant rat-tat-tat of the ongoing executions.

"That's right. How did our country ever come to this?" He started speaking again. "Weren't multiculturalism and tolerance the cornerstones of our culture? Terrorists! That's right, it must have been terrorists! Terrorists born of intolerance and hatred, it's all their fault…no? No, it must have been something else. The military didn't need to declare martial law in the capital to deal with a routine terrorist threat, surely? The police had it under control? So why? Why has it come to this? How has it come to this?"

There were no cries, no screams. The only testament to the anonymous dead whose corpses were piling up in the hole was the sound of the very gunfire that caused their deaths.

I was getting fed up with this bullshit. Nothing good ever came of having an old man staring his own death in the face. What was this, some sort of deathbed confession to atone for the stream of dead he left in his wake? Did he think he would earn absolution for his eternal soul or something? Seek forgiveness with a humble heart and you will be saved? That Christian shtick isn't going to work with me, buddy—I'm a confirmed atheist.

I told him as much. Called him out on his bullshit. I wasn't a priest or a pastor, I explained. I couldn't give him the absolution he asked for even if I wanted to. Which I didn't. Your repentance is bullshit—too little, too late. No religion can save you now, and if there is a hell you are going straight there.

"I’m sure I am. I'll go straight to hell, no doubt. But you misunderstand me, son. I'm not asking for forgiveness. I'm just trying to work out what went wrong. How this country has gone so wrong. It used to be such a wonderful place. So beautiful. Up until only a couple of years ago…"

And that was when it finally clicked. This man in front of me, the former brigadier general of this country, was genuinely puzzled. More than that, he was filled with dread, but not thanks to the knife I was holding to his throat. He was terrified because he didn’t even comprehend his own motives for fighting in this civil war.

I shuddered. How illogical, how fucked-up it was to forget your reasons for fighting, now of all times. And how convenient.

"Why did you kill so many people?" I asked.

"Why did I kill so many people?"

That's against the rules, answering a question with another question, I thought.

The old man in front of me was now raving, his teeth chattering in fear. He was on the brink. His answers were too far gone for me to have any more faith in his words, but I continued regardless, pressing my knife even further up against his jugular.

In the short time our bodies had been pressed together my disguise had started adapting to the outfit the former brigadier general was wearing: full military regalia, replete with medals and decorations. A cold shudder ran down my spine—it was as if the old man's madness was infecting and about to possess me. Not that there was anything I could do about it while I had his arms pinned behind him and my blade to his throat.

"Won't you please tell me?" he was asking me now. His eyes were the eyes of a corpse, pupils hollow and void of any life. The phrase "looks as though he's seen a ghost" is bandied around a lot, but it occurred to me that he was what a person would actually look like if they had just been confronted with incontrovertible proof of a real, supernatural terror. I gritted my teeth, trying to force myself to blot out the absurdity of the situation in front of me.

"Shut up!" This was definitely not part of the plan—it absolutely had not occurred to us that this could have been one of the reactions. A groveling show of regret and remorse for the cameras, sure, and that would have been easy enough to deal with. As it was, the words that were now spilling forth from this man's mouth had an almost hypnotic effect, and as the words increased in intensity, I worried that the torrent of madness spewing forth was starting to encroach upon my own sanity.

"Please, sir, I'm begging you! Tell me why! Why have I killed so many people?"

He was completely oblivious to me now. Babbling. How the mighty had fallen.

"Look, old man, I can't help you. Won't you please just be quiet?" I'm ashamed to say that by now my own voice sounded as pitiful as his.

"Why did I kill everyone?"

And that was that. I just couldn't take it anymore.

I drew my blade across his throat. Fresh blood splattered and turned the mosque wall into a Jackson Pollock painting. Before he had time to choke on his own blood I quickly hamstrung him so that I could force his once-imposing body to the ground and thrust my blade into his heart. As I did so, blood bubbled from his mouth and his eyes flared open.

The former brigadier general, the man who had called himself defense minister for the interim government, was dead.

The great commander of the estimated thirty-five thousand armed insurgents who terrorized the countryside was dead.

I felt as if reality had snapped back and hit me in the face. I realized for the first time that the piano melody that had been filling the room had long since faded without a trace.

Moonlight Sonata had finished without my noticing. I shook my head to clear my thoughts before looking around. It was as if I'd been in some sort of magical alternate dimension and forgotten to breathe while I was there. I gulped again for air.

The night that had briefly been caressed by the Moonlight Sonata had returned to echoing the sound of people killing each other.

"What on earth happened here, sir?"

I turned around to see Alex's troubled expression. All I could do by way of response was sigh. I didn't even want to start thinking about how to explain the old man's extraordinary behavior.

"Are you all right, sir?" Alex asked again. Ever the professional, even as he spoke to me he was checking the corpse of the ex-brigadier general that lay on the floor. He was using the recording capabilities of the nanolayer implants in his eyes to confirm and record the old man's death from as many angles as possible.

"Yeah. It looks like Target B isn't coming here tonight, though."

"Oh. Unlike Intelligence to get that wrong," Alex said calmly, going about his work.

I could hear more gunfire in the distance.

The atrocities in this area aren't quite over yet, I thought to myself.