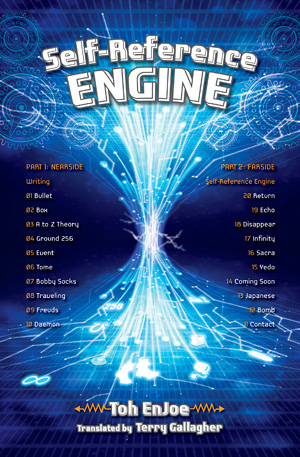 This is not a novel.

This is not a short story collection.

This is Self-Reference ENGINE.

Instructions for Use: Read chapters in order. Contemplate the dreams of twenty-two dead Freuds. Note your position in spacetime at all times (and spaces). Keep an eye out for a talking bobby sock named Bobby Socks. Beware the star-man Alpha Centauri. Remember that the chapter entitled “Japanese” is translated from the Japanese, but should be read in Japanese. Warning: if reading this book on the back of a catfish statue, the text may vanish at any moment, and you may forget that it ever existed.

From the mind of Toh EnJoe comes Self-Reference ENGINE, a textual machine that combines the rigor of Stanislaw Lem with the imagination of Jorge Luis Borges. Do not operate heavy machinery for one hour after reading.

My good friend has a crush on a strange girl. This seems a bit odd to me, but that's love for you. It's just something that happens, but when it's your best friend you start to make some really bizarre and twisted rationalizations about what is happening. Of course, if you really want to know what is going on in Rita's crazy head, you'd be better off asking Rita herself. I'm sure it wouldn't be some story about a bullet from the future. You might even say the only important question was whether or not Rita even likes Jay.

Ever since Jay finished explaining his "hypothesis" and burst into tears, I've been wondering just that. What does Rita say? Jay turned bright red, grabbed a fistful of grass and tossed it aside, and ran away, so I never found out the details. But there is no reason to think anyone could ever ask anything so directly of a guy whose thoughts were so tangled. He might even be thinking he should take a knife and cut Rita's skull open, just to be sure.

So, resigning myself to the possibility of sacrificing a testicle, I decided to call on Rita at her house. Two would be too much, but one I could probably live without, for my good friend's sake. I just thought of Rita as a girl whose head was screwed on the wrong way, but I was pretty sure I could count on her not to do anything so stupid as to shoot off both my testicles.

The Rita who greeted me at the door, far from being the kind of person who would threaten to tear me a new asshole if I didn't leave right away, invited me politely, even demurely, into the living room. Somehow there was a poor meshing, like a loosened spring, in the air. I could not relax, as if while holding a watch with the back removed someone had told me to do a backflip.

As I sat there, shifting my weight on the seat from one butt cheek to the other, wondering how to start this conversation, Rita came back in with tea. She set a cup before me, her thumb stuck in it, and said, "I heard."

"From James," she went on, looking straight back at me.

I had not anticipated this, and I was flustered. Which story, exactly, had Jay told her? The highly colorful tale that he was in love with her? Or the fantastically colorless tale that she was moving backward through time? Or had he come and danced before her and blabbed that I was the one in love with her? At the thought that the last of these ideas was actually the most likely, a chill ran down my spine. I had the feeling this was going to cost me more than just one testicle.

"It's true," she said, hanging her head.

I couldn't figure out which of the possibilities she might mean.

"The reason I shoot recklessly is just as James suspects."

Immediately upon hearing those words, the cry that arose in my heart was, I did it! I'm going to live! And in that spirit, I adjusted my posture in my seat, and as Rita's words spread through my brain, I somehow slid halfway out of my chair. Mr. Messed-Up.

That's no way to get a girl to like you.

As I struggled to crawl back up out of the chair, I rummaged desperately through my brain for the right words, the words she would want to hear, the words that would keep her from shooting me on the spot.

To be honest, I was completely unnerved. Rita gave the chair a good yank and left me sprawling on the floor. It took me a while to pull myself together again and stand up straight.

"So, what I want is for you to tell Jay that on, let's say, this Friday, how would he like to come to dinner at my house?"

That super-syllogistic sentence completely failed to penetrate my awareness. What was the need for a dinner party at Rita's haunted house, where everything was heaps of shards, dripping with unidentified fluids?

Knitting my brow, propping my index fingers on my temples, I concentrated with all my might. When I lifted my head, thinking I had failed the quiz, right in front of me was Rita's face, her cheeks bright red.

What could it be? This marvel of a girl, who could accurately and repeatedly shoot holes in the acorns in a woodpecker's hoard, was in love with someone.

If I could just figure out who, that person would get shot full of holes. So who was going to get that hornet's nest? Jay was.

Realizing my own stupidity, I pounded my forehead with the palm of my hand. Of course it was Jay. The smartest guy on the planet. For me an auspicious realization, for Jay a killing blow. I would have to keep a close eye on her, but thoughts of praise for Rita coursed through my head: the bitch had really worked things out, etc., etc. No reason he wouldn't show up to dinner, I guarantee it. If it seems like he's not going to show up, but then finally he does, I guarantee he'll never go home again, no matter what. Well, he really should be saying this himself-it's not for me to say; well, but maybe it is though, really, surely. I was all confused and just babbling away to fill the time, words all ajumble. I tried to stop, when Rita reached out for her revolver and then staggered as if she had been struck by something.

I was full, full to overflowing from standing so long, continuing to confront directly this unprocessable development. Unable to figure out what was what, I bolted up from my chair and ran over to Rita, who was dancing a strange dance and slowly dropping to the floor.

Looking down at her, lying on the ground, her long hair strewn about, only then did I notice the small hole in her head.

She had a bullet in her head.

And not just that, James. She had an actual hole in her head.

This was the moment when it happened.