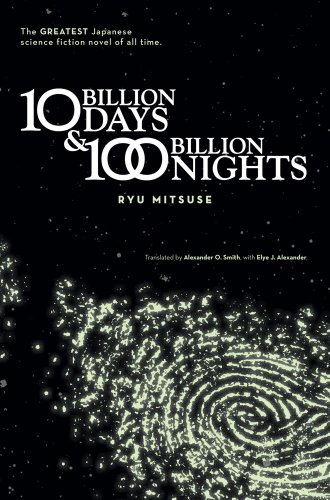 Ten billion days—that is how long it will take the philosopher Plato to determine the true systems of the world. One hundred billion nights—that is how far into the future Jesus of Nazareth, Siddhartha, and the demigod Asura will travel to witness the end of all worlds. Named the greatest Japanese science fiction novel of all time, Ten Billion Days and One Hundred Billion Nights is an epic eons in the making. Originally published in 1967, the novel was revised by the author in later years and republished in 1973.

“‘Ten Billion Days and One Hundred Billion Nights,’ that's a lot of time, but Ryu Mitsuse covers all of it in under 300 pages, and the result is quite fabulous.” –Alan Cheuse, All Things Considered

If you like Ten Billion Days and One Hundred Billion Nights, VIZ Editors recommend:

Siddhārtha lay half buried in sand, still as a lump of stone. His tri-D antenna opened slightly, shedding a tiny stream of dust.

He could sense his enemy nearby—everywhere, it seemed.

No—there he was, not more than a hundred meters away, moving from left to right across Siddhārtha's field of vision.

I wonder what he's up to?

He resisted the temptation to fully extend his antenna. In the quiet that now reigned, even the slightest movement could draw attention from a considerable distance. The release of kinetic energy was one of the easiest to detect. It would be far too dangerous to reveal himself; the last attack had proved beyond the shadow of a doubt his enemy's hideous strength.

So what is he doing?

Unable to restrain his desire to know, he let his antenna push another ten centimeters above the top of the sand.

Unthinkingly, Siddhārtha tensed every muscle in his body.

A thousand meters ahead of where his enemy slowly made his way across the flats was his destination—a small black shadow atop a dune. Asura.

Jesus of Nazareth was moving slowly, leaving footprints in the sand. The flames and explosions had singed his already tan skin to such a brownness that he threatened to disappear into the desert landscape altogether.

Jesus was almost out of Siddhārtha's range when his path began to curve as he headed directly toward the top of the dune where Asura was standing.

The sky and land were lit with scarlet for a moment. Then as Jesus began to climb the dune, the world faded again to its former monotone, and an icy wind blew in between the swirling flames. The brightness of the flames waxed and ebbed. Even the rapid energy shifts and massive discharges generated by the Nazarene’s weapon lost much of their power in this world near death.

Siddhārtha searched around for any sign of Orionae, but could not detect him anywhere. Finally, he fully extended his antennae, reasoning that his enemy's attention would be fixed on the far-off dune where Asura was standing.

As he did so, he felt a terrible and urgent need to act. I have to distract him!

Siddhārtha struggled out of the sand to stand. "Hold! Jesus of Nazareth!" he cried, yet his voice only traveled from the top of his throat back down his neck into his own body, reverberating up into his ears, but never reaching the outside air. Siddhārtha panicked, realizing that if he did not draw at least half of his enemy's firepower in his own direction, Asura would not be able to withstand another of Jesus's attacks.

Suddenly, the far edges of the flats erupted toward the sky without a sound. Higher and higher they rose into the gray atmosphere, creating a valley with impossibly steep sides, while at the same time the edges of the sky plunged toward the ground. At the limits of Siddhārtha's field of vision, sky and land joined together, fusing into a single curved wall. Lighter than shadow, more indefinite even than the void, the flats and the gray sky formed a giant cylinder, as if the very laws of geometry had broken. Far out in that vertiginous space, like a fragile image in a kaleidoscope, he could see Asura looking very small.

The howling of the wind had ceased entirely, leaving a sickening emptiness in its place.

Siddhārtha sprinted through the deathlike silence, lacking the time to consider why Jesus of Nazareth grew no nearer no matter how much he ran.

As Siddhārtha sped across the sand, the battle structures in his body prepared for combat. Palisade tissues—resembling those in a plant, but more closely akin to the electroplaques of an eel—linked his processors and his core reactor to his weapons units; discharge panels on his shoulders opened like unfolding leaves. Automatically, his metabolizer revved up to maximum capacity as the circuit from the reactor connected to the roots of the panels. In an instant the leaves were ready to unleash their deadly stores.

Siddhārtha did not hesitate. Still sprinting, he released the high voltage inside his condensers in a single blast.

With a flash sky and land turned ghostly pale. The electromagnetic waves pulsed toward their target, tracing a circle of pure blue ions around Jesus of Nazareth.

Less than a breath later, Siddhārtha struck again. This time, the gray sky turned a dark leaden color. Seen from within, all the objects inside the great cylinder lost their individual colors, becoming translucent. Then, a circle of ultramarine light began to spread, enveloping all.

Siddhārtha watched as his attack ran its course.

The shining ring of the electromagnetic wave was rapidly spreading in all directions, losing its coloration as it went. It dispersed like a broken circlet of chain links, some sections clinging together, others severing completely until all had disappeared. Siddhārtha spotted Jesus's emaciated back standing just beyond the fading circle of light.

He shook his head and resumed his mad dash across the sand. While he ran, the gray sky and the vast desert ground into motion, moving with increasing speed until all was rotating around him. Gaping vortices formed in the sky, while the flats transformed into a faded spiral that spun at a frightening velocity. The only things not carried by their motion were Siddhārtha and the man from Nazareth.

Siddhārtha’s thoughts raced. Why, when everything around us is spinning at such a furious rate, am I and Jesus alone still able to stand? He felt cold sweat trickling down his back as understanding slipped from his grasp.

Then suddenly he understood: he had been pushed into a separate space from the one where Jesus and Asura stood—a fold in space-time, or a separate plane entirely.

"Let me out!" he shouted with all his strength. "Let me out of here!" But all his voice accomplished was to vibrate the air that closed around him.