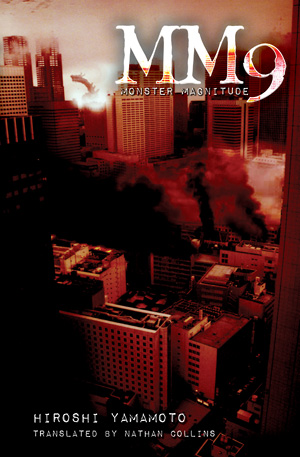 Japan is beset by natural disasters all the time: typhoons, earthquakes, and...giant monster attacks. A special anti-monster unit called the Meteorological Agency Monsterological Measures Department (MMD) has been formed to deal with natural disasters of high “monster magnitude.” The work is challenging, the public is hostile, and the monsters are hungry, but the MMD crew has science, teamwork...and a legendary secret weapon on their side. Together, they can save Japan, and the universe!

A jittery reporter on the flatscreen TV was saying, "The child—no, the kaiju with the appearance of a child—just sat down in the Nagara riverside road and is holding a car, pushing it back and forth, playing with it like a toy. Oh! She’s lifted it up now. Oh, that’s really high. There doesn’t appear to be anyone inside, but . . ."

Yuri grumbled, "Really, this doesn’t give us anything."

Five hours had passed since the kaiju was first sighted, and all the networks had teams of reporters on-site—but all of them broadcast images with a digital mosaic obscuring the girl’s body below her neck. It was self-censorship, each network independently coming to the same conclusion—an uncensored image might have run afoul of child pornography laws. But even so, it was frustrating for the MMD not to have full knowledge of the kaiju they were dealing with.

Chief Kurihama asked one of the younger operators, "Do you have the Gifu office on the line?"

"We still can’t reach them. They seem to have run into a bit of trouble."

"They got to Nagoya thirty minutes ago. They’re probably nearing the site now."

"What the hell are they doing?" Kurihama threw his elbows on his desk and fretfully twirled his pen in his fingers. "The army’s already deployed, ready and waiting for our advice, and we can’t do anything because we’re still not even there. The media’s going to be all over us."

"Chief," said a female operator with one hand covering her phone receiver, "I’m getting several inquiries from the networks. They want to know if we have a name for Kaiju Six yet."

"How the hell can we? We haven’t even seen what she looks like yet!"

One of the other operators happily reported, "Chief! I have a connection with Yojiro on-site!"

"Put him on the main screen."

Yojiro’s face appeared on the flatpanel display. Visible behind him were a six-wheeled Type 82 Command and Communication Vehicle and a Type 89 Infantry Fighting Vehicle with SDF soldiers scurrying between them.

"Sorry it took us so long to get here," Yojiro said. "But we’re here now."

"What’s the situation?" the chief asked.

"Kaiju Six was moving westward but stopped northwest of Mt. Kinka, near the Nagara Bridge. We are located roughly two klicks downstream by the Chusetsu Bridge. Currently, the kaiju doesn’t seem to be making any major movements. I’ll put it on camera now."

The camera panned right to show the Nagara River upstream.

The image zoomed in. All eyes were on the screen.

A bare-naked girl, sitting on the right-hand shore of the river, was playing with a car in her hand. At first glance, it was a tranquil scene. Her long hair hung down to her waist and covered her upper body like a cloak. The bridge in the foreground obscured her from the waist down. Aside from her darker skin, she looked like a normal Japanese girl—and nothing like a kaiju. This perception was heightened by the lack of a sense of scale in the long distance shot. She looked like a child of normal height playing with a miniature car.

The others in the room shared her sentiment. If the girl were a human, she would have been around ten years old. Her chest, though mostly covered by her hair, was clearly that of a child.

Yojiro continued his report. "The 10th Division and the 35th Infantry Regiment have been deployed along Highways 77, 157, and 248, forming a cordon around Kaiju Six. The evacuation of Gifu City is only about halfway complete, but the northern area of the city and everything within a three-kilometer radius of the kaiju are pretty much all clear. Security forces are checking for any stragglers. Once we’ve confirmed the evacuation is complete, we can commence the attack. We estimate Six to be twenty meters tall—MM5 at most. We anticipate that tank-mounted cannons or anti -
tank missiles will be enough to destroy it. The only problem is—"

A kaiju in the form of a human—or, more simply, a giant—was not entirely unprecedented. All living things on Earth had the capability of massive increases in size, although the cause or causes remained unknown. The press often called the transformations "sudden mutations," but they were incorrect. The sudden changes
weren’t the result of a biological process, but rather developments contrary to the laws of physics, specifically, the law of conservation of mass.

There have been many examples of giant-sized life-forms in all regions of the globe: ants, grasshoppers, praying mantises, spiders, scorpions, snails, octopuses, lizards, snakes, crocodiles, chickens, mice, moles, rabbits, monkeys, and so on. As humans were also living creatures, it shouldn’t have been a wonder to find a human kaiju.