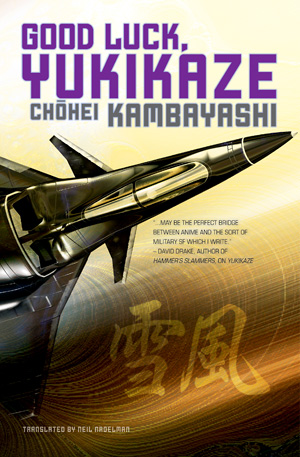 The alien JAM have been at war with humanity for over thirty years...or have they? Rei Fukai of the FAF's Special Air Force and his intelligent plane Yukikaze have seen endless battles, but after declaring "Humans are unnecessary now," and forcibly ejecting Fukai, Yukikaze is on her own. Is the target of the JAM's hostility really Earth's machines? And have the artificial intelligences of Earth been acting in concert with the JAM to manipulate Yukikaze? As Rei tries to ascertain the truth behind the intentions of both sides, he realizes that his own humanity may be at risk, and that the JAM are about to make themselves known to the world at large.

“Lieutenant Fukai, you are fighting a useless battle. Do you hear me?”

“This is B-1, I read you loud and clear. Please state your name, rank, and unit attachment.”

“Response confirmed. I lack the type of classification and identification codes which you have asked about. Lieutenant Fukai, please respond if you accept or deny my request.”

“If you’re going to make a request of someone, it’s only common courtesy to make your social position clear to them,” Rei replied, knowing that wasn’t true at all. “Who are you?”

After a short, almost embarrassed silence, it responded.

“By your conceptualization, I am the whole of what you refer to as the JAM.”

“The whole…You mean you’re the JAM themselves? Should I think of you as a voice representing the JAM?”

“I would not object to that judgment. Please issue your response.”

Rei switched off the comm circuit for a moment and called out to Lieutenant Katsuragi.

“Lieutenant, what do you think of what it said? Do you think I can believe this to be a representative of the JAM?”

“Hell if I know. I will say that it sounds unnatural, though. Like somebody is ordering it to say that stuff to you.”

“I agree. Maintain observation of our surroundings.”

He reopened the comm link.

“I can’t understand the meaning of your request,” Rei replied. “When you say my battle is useless, I don’t know to whose advantage you’re referring, so I can’t answer you.”

“I somehow doubt that.”

The suddenly fluent and lively voice he now heard leaping into his ears made Rei shiver. He knew one very similar to it. The man at that mysterious base where Lieutenant Burgadish had met his end. Yazawa. Major Yazawa. The name of the man he’d told Colonel Rombert about over and over again. The JAM human. It had to be him.

“Lieutenant Fukai, I very much doubt that you don’t understand its meaning,” the new voice said. “We’re saying that the FAF has no chance of winning, so we’re offering you a way to save yourself. Come with us. We’ll lead you to a place where you can live in safety. If you don’t comply, you’ll only end up dying a meaningless death.”

“I can’t trust your words,” Rei said. “I reject your demand. I won’t negotiate with you.”

“I say again, I will not negotiate with you.” He called back to the rear seat. “Lieutenant Katsuragi, I’m engaging them. We’re attacking the target plane to starboard. Get ready for their counterattack and stand by on EW.”

The stores control panel automatically displayed, letting him see at a glance all of the weaponry loaded onboard. Yukikaze was agreeing with his decision to attack. She selected the high-velocity short range missiles, telling him to lead off with those. Rei snapped Yukikaze into a sharp turn. The target plane reacted immediately. In a close-range dogfight between the Maeve and a Super Sylph, the Maeve had an absolute advantage.

He launched the missiles, their range to the target extremely short. Rei counted to himself: 3… 2...1! and then the target plane vanished. It happened suddenly, without any warning. Having lost their target, the missiles flew straight through where the plane had vanished and then self-destructed.

The target plane suddenly reappeared on the starboard side.

“Shit,” spat Lieutenant Katsuragi. “The thing may not even really be there—”

As if chiding the lieutenant’s impatience, Yukikaze scrolled a message onto the display.

“Such foolishness, even after we offered to save you. Very well. If you insist, I will accept your challenge. Now see who truly rules the skies. This place shall become your grave—” the owner of the voice was saying. Suddenly, with no explanation, the words stopped. There came a shout like “No, don’t!”

Disaster struck the target plane. Its canopy blew off.

“The crew have ejected,” Lieutenant Katsuragi reported. “Confirm ejection of both front and rear seats. Are they running away? But why? What happened?”

The lieutenant followed the two ejected seats with his gaze. They fell behind and to the side of their flight path, tracing a double-helix path through the air as they spiraled away around one another. He saw no sign of the crew’s bodies separating from the seats or of parachutes opening, even as he twisted his neck as far around as he could to keep them in sight. They were enveloped in a reddish phosphorescence, sprouting glowing red tails as they grew smaller and smaller until they finally vanished from sight.