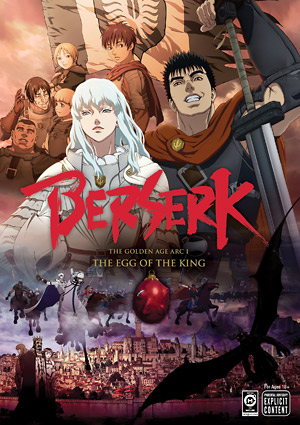 He trusts no one, only his sword.
He doesn’t have a place to call home.
The lone mercenary Guts travels the land where a hundred-year-old war is taking place. His ferocity and ability to take down enemies attracts the attention of Griffith, the leader of a group of mercenaries called “The Band of the Hawk.” Griffith desires Guts’s power to help him achieve his goals. He succeeds in recruiting Guts by challenging and winning a duel with him.
As the Band of the Hawk fight together and their bond as a unit is strengthened, Griffith and Guts’s bond deepens even more.
Thanks to their continued success on the battlefield, Griffith achieves the first step in fulfilling his goal: his band of mercenaries becomes a full-fledged army within the Midland Kingdom. Despite all their success, Guts begins to question his reasons for fighting for Griffith’s dream.
Unknown to Guts, this unyielding dream is about to bestow a horrible fate on them both.

If you like Berserk: The Golden Age Arc, VIZ Editors recommend: