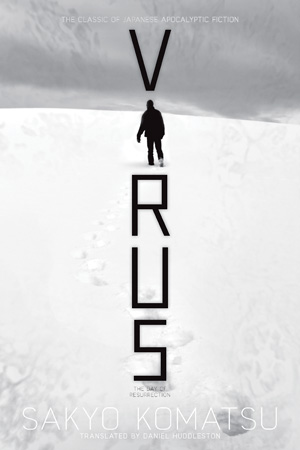 In this classic of Japanese SF from 1964, American astronauts on a space mission discover a strange virus and bring it to Earth, where rogue scientists transform it into a fatal version of the flu. After the virulent virus is released, nearly all human life on Earth is wiped out save for just ten thousand men and a handful of women living in research stations in Antarctica. Then one of the researchers realizes that a major earthquake in the now-depopulated United States may lead to nuclear Armageddon…

East of the Tonga Trench, Nereid bid farewell to tropical waters and continued on ever southward through the southern hemisphere. In the waters near New Zealand, she raised her periscope briefly, but then continued running under the sea just as before. After a week, Nereid was shaken by a strong upward shock wave and for a while afterward was rattled about by a wide, undulating front where cold and warm water mixed. Navigator Vankirk placed his hands on the auto-adjuster for differential current. They had entered into the cold, fierce Cape Horn Current.

Not long after, the ship dove to a depth of two hundred meters. This was to avoid the undersides of icebergs. The watch was increased to two men on four shifts. Eighteen days after putting the spring weather of the northern hemisphere behind it, Nereid plunged into the southern hemisphere’s autumn, ravaged by the west wind, then headed even farther, closing in latitude by latitude on the eternal winter of the polar cap. She passed under the raging Westerlies that stirred the face of the sea to a foamy froth up above, and it was then, when the dark, ghostly shadows of icebergs overhead began to appear in the forward camera view, that the order to surface was given for the first time in four months.

A blood-red sun crawled along just above a thick fog flowing along the northwest horizon. The air was piercingly cold. Bathed in pink sunlight, flat, tabular icebergs and countless smaller chunks of drifting ice bobbed in the water. At sixty-two degrees south—a hop, skip, and a jump from the Antarctic Circle, one of the continent’s huge white capes could be seen under roiling gray clouds, indistinct, like some ghost or monster. It was nearly April, and Antarctica was just beginning to dress herself in winter.

One after another, the crew came out of the ship for the long-denied sight of the clear, blue sky toward the zenith, and for a breath of the stingingly cold salty air. Their teeth chattered as they stretched their arms and legs. The temperature was low enough that ice began to form on the hull and the diving planes right away. Sixty-two degrees south: that was the borderline between life underwater and life in the air. In the history of the human race, it also demarcated the 1960s from the 1970s. From this point forward, everyone would be gazing ahead in silence, looking not for some Antarctic station they were trying to get back to, but for the world of the 1960s that they had left behind so long ago. The world that lay north of that decade’s borders, that huge world that had grown to more than three billion people, which had recorded five thousand years of history, which had achieved a century of blindingly fast development, had come to a sudden end as the 1960s drew to a close, and humanity’s 1970s would come only in the bitter cold and raging blizzards of the south, that harsh world sealed away in eternal ice.

With the aid of the unmanned beacon at Cape Adele, course corrections were completed, and a siren indicating that the ship would be submerging again soon rang out once more.

After taking a moment to gaze up at the auroras in the high skies—they blossomed like white flames from off toward Magnetic South—the crew silently disappeared back into the hatch. Plunged back down into the depths of the sea, they now had to rely on supersonic navigation aids to return to Scott Station. That was where the sole dock for the nuclear submarine had been thrown together. Once they were relieved, the crewmen would embark on another long, hard trek through the snow, each of them toward their own transient homelands scattered across this continent of ice.

Nereid blew its high-pitched, mournful siren into the blustery Antarctic sky. After that, the thin layer of ice that had formed on her nose cracked and crunched as the smooth shape of the submarine slipped back into the icy water. As the bridge sank into the water, the siren wailed loudly one last time. That sad note continued to echo off of newly forming icebergs and carried long and far over the pack ice. It sounded as if that barren wilderness of ice itself was shouting out in a metallic voice the question of that world that had gone to destruction.