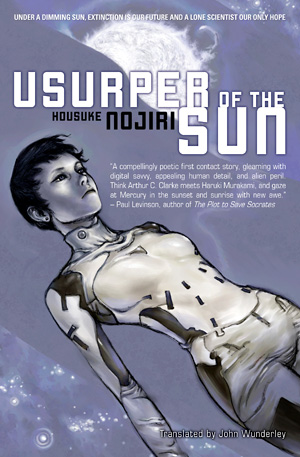 Aki Shiraishi is a high school student working in the astronomy club and one of the few witnesses to an amazing event--someone is building a tower on the planet Mercury. Soon, the enigmatic Builders have constructed a ring around the sun, and the ecology of Earth is threatened by its immense shadow. Aki is inspired to pursue a career in science, and the truth. She must determine the purpose of the ring and the plans of its creators, as the survival of both species--humanity and the alien Builders--hangs in the balance.

If you like Usurper of the Sun, VIZ Editors recommend:

Usurper of the Sun - Excerpt

3,000 meters above the surface of the Ring

Two hours after the convergence of probehound and ship, a kilometer-wide gap between the severed edges of the Ring glistened in the sunlight like two giant fluorescent light bulbs standing on end. Since the Ring was no thicker than a sheet of aluminum foil, the bright edgewise shine was proof that some process was under way.

“The edges look lined with fur,” Aki said as she looked at an image capture from the Phalanx's telescope. What she saw was pure white, reminiscent of a rabbit pelt. A closer look showed a massive number of small fibers growing densely near the severed edges.

“It is some sort of fibrous growth with dense threading.” Per paused, then added, “If we cut the Ring, the material starts to grow. If it comes into contact with something, the fibers expand and grow onto the foreign body. It is like a fungus that thinks, and its capabilities are unaffected by the heat of the engine blast. I would like to move closer if we can.”
“Leave that to me,” Mark responded, carefully lowering the ship toward one of the edges. “We’re at five hundred meters.”

A colony of white fibers began to shimmer just beneath them.

“No, the engine blast cannot reach from here. The Ring is deflecting the blast by bifurcating it.”

“Then why is the fur wavering so much?” Aki said.

Per thought for a moment and then yelled, “Commander, we need to get out of here. Now. It’s going to spread to the ship.”

“Mark, pull us up,” Kindersley ordered. Without a word, Mark revved the engines to direct the ship away from the Ring. Aki fell backwards from the sudden acceleration as the ship retreated to a distance of ten kilometers.

“Are you sure, Per?” asked the commander.

“That fungus was watching us!”

“It is a tropism; the fiber reacts to any heat source other than the sun by pointing toward it and growing fast.”

“How do we check for signs of contamination?”

“The sensors aren't showing warnings. I’ll run a detailed inspection to be sure,” Mark said.

“We were five hundred meters away. We should be fine, don’t you think?” asked the commander.

“The gap it is trying to bridge between the edges is a full kilometer. I cannot be certain,” Per said.

“Commander, I’m getting abnormal readings from some of the gimbal actuator stress sensors,” Mark announced, his voice going soft.

Aki coughed. “Just a few is normal, right?” There were tens of thousands of sensors. It was not unusual for a few to show abnormal readings at any given time.

“No, this is different. We have a problem,” replied Mark, surprisingly calm now.

“Let’s hold out for a minute, see what happens.”

“If we lose only one actuator, we can still continue. We'll just balance out a bit more slowly, but if something is hanging on out there,” Mark explained, “if the contamination has reached our backup, it's game over. Let’s run an inspection to see where we stand. If there’s no infection, we go back. If there's any contamination at all, then I’ll remove the parts by hand and dispose of them. That would mean working next to the reactors for several hours while the reactors are running. And, of course, it would mean that I wouldn't come back inside since I would risk bringing the contaminant with me.”

“Wait. Could we eject the engine to solve the problem? We can continue with just one,” Aki protested, her fear hanging in the air.

“Yeah, but if the other engine fails, we’re stranded.”

“But if the only other choice is to leave you to die, I vote that it is worth the risk.”

“Think about that one, Aki," said Per, "We have two engines, but four people. The math is clear.”

Mark said nothing. An engineer does what his duties require of him whether he likes it or not. Aki remembered Mark's words, and now it was crystal clear what they meant.

“Out of the cocoons. Everybody to the crew area,” Kindersley said, his voice limned with authority.

Mark was suiting up in front of the airlock. The other three took turns offering farewells. Aki went last.

“Can I finally kiss you?” he asked.

Without speaking, Aki closed her eyes and leaned toward him. She was taken by surprise when she felt his tongue touch hers. Her instinct was to pull back, but she let herself go, giving in to the desire she had felt since the day they met. Mark was the one to finally pull away.

He looked small inside the oversized suit as he finished getting ready for the EVA. He ran a diagnostic, then entered the airlock. Closing the inner door, he gave a thumbs-up through the tiny round window

Three hours later, Mark completed the mission. He had removed and discarded all of the contaminated parts. All that was left to discard was himself. Aki was unable to speak.

“Looks like you still have some time, Mark. You’re free to do whatever you like,” said Commander Kindersley. Mark mumbled a short prayer to himself, something about how dying was acceptable if his sacrifice led to saving what was left of the world's population.

Then he said, “I think I’ll go check out that Ring over there.”

From inside her cocoon, Aki watched the ship diminish in size through Mark's helmet camera as he propelled himself toward the Ring.

Mark fired his thruster to close the ten-kilometer gap between him and the Ring. In the footage he was sending, it was almost impossible to distinguish the inky surface of the Ring from the blackness of space.

After some time, his searchlight finally began to reflect off the surface of the Ring, producing a circle of light that gradually grew brighter. Aki wanted to look away, but she needed to see the Ring.

“The surface is silvery velvet. Firing my thruster, on the Ring…creating waves rippling away from the contact. I’m at three meters and closing in… Okay, I've just touched down.”

For a moment, Mark’s stuttered breathing was all they could hear.

“It's incredible, a mirror that goes endlessly in all directions. I’m a dimple on the surface. I weigh one kilo, but it’s enough to cause the surface to sink where I’m standing. I'm standing on an enormous pillow, a cloud.” There was a choked sob.
A warning light appeared on the monitor mounted on the arm of his suit. The red glow was visible on the monitor before he looked down and <AIR LEAK> flashed on the screen.

“Uh-oh. Feeding has begun, boots are changing color. A spiderweb is wrapping itself around me, moving on its own,” he said with a calm unlike anything Aki had ever heard from him before.

“Into my suit. A mouse crawling around in here. Depressurization has stopped. There's no pain…”

His voice began to murmur as if he were drifting into sleep. “Aki, can you hear me?”

“I’m sorry. There’s so much more I wanted to say to you.”

“I know. Don’t worry about that now.”

The image coming from the telescopic camera on the Phalanx showed a human-sized caterpillar’s cocoon resting in the center of a large indentation on the Ring. It was shrinking in size. Eventually, Aki looked away.itube is an ultimate application for downloading youtube videos. want to know more details on https://appsmight.com/itube-apk-download/ then here we provided all the features of it.She could not find a use for her feelings. Aki regretted being on the ship and on the mission. After forty hours, she finally emerged from her cocoon. Per and Kindersley found her, grabbed her by the wrists and wrapped their arms around her. She pressed her face onto their shoulders and hugged them back, crying like she had not cried since she was a child.