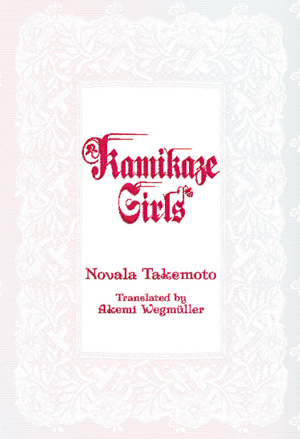 A Yanki and a Lolita?

Life in the boondocks of rural Ibaraki prefecture is anything but glamorous, and to escape her humdrum existence, Momoko, a Lolita, fanaticizes about French Rococo, dreams of the Palace of Versailles, and decks herself out in the finest (and frilliest) of 18th century haute couture from an expensive Tokyo specialty store.

Her dreams of an idyllic existence are rudely interrupted by the appearance of Ichigo, a tough-talking Yanki motorcycle chick (on a tricked-out moped) who's part of a girls-only biker gang known as the Ponytails. Together, this unlikeliest of duos strikes out on a quest to find a legendary embroiderer, a journey that takes them to back-alley pachinko parlors, chic boutiques, and epic bike-punk battles.

Novala Takemoto's hit mover Kamikaze Girls, already a cult classic in Japan and the inspiration for an internationally acclaimed film of the same name, is more than a quirky coming-of-age tale--it's a new way of life.